Slower growers may change the fiery loop of the eucalypts 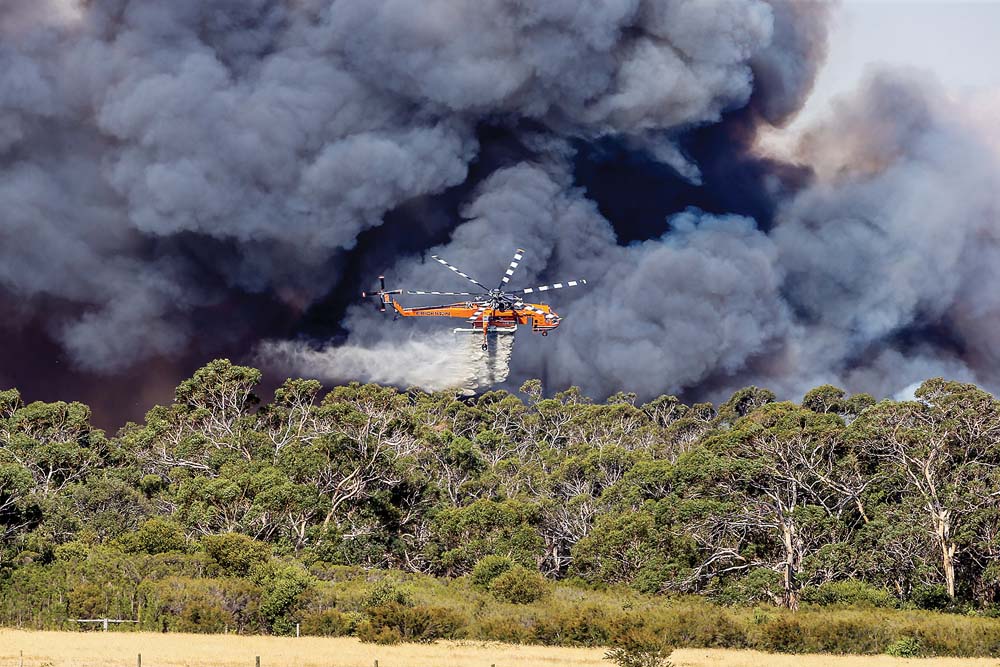 TEN years ago, following the fires of Black Saturday, a retired rabbit trapper from Mt Eliza sent in a poem to a newspaper, written in 1851 about fire. Lawrence Prout, the trapper, was 85 then.

The poem resonated because 10 years earlier, as a member of the Central Highlands Forest Management Committee, and a decade before that again in 1989, I was looking into the proliferation of eucalypts and their role in the spread of fire. The lines resonate now in 2019, with the country in similar drought, experiencing similar fires. What are we to do?

The verses had been written by a bush poet John Lloyd of Calen, near Mackay, Queensland. Mr Lloyd researched bushfires in NSW and Victoria, finding an uncanny resemblance between the fires of 2009 and the western district fires that killed 12 people, a million sheep, thousands of cattle and native animals on Black Thursday, February 6, 1851.

The bush poet took the voice of an aboriginal elder who warned white settlers about the need to burn the country safely:

A thousand years of learning

Was wasted in his name

For the whiteman feared the firestick

Now hell was a wall of flame.

Lawrence Prout agreed with the sentiments about Aboriginal land management. He had worked in what was once Australia’s largest expert industry – rabbits. He had been a trapper for six years, then moved into transport, sending 100,000 rabbits a week to England and France. He strongly believed cattle should have been left to graze the High Plains, we didn’t talk about the role of Brumbies then.

But in Canberra in 1989, I asked paleobotanist Dr Gurdip Singh at the ANU, why Australia had a virtual monoculture of eucalypts.

Dr Singh’s work over 10 years on Lake George’s ancient sediments, showed that a dramatic change from fire sensitive vegetation such as the casuarina, to the fire tolerant eucalypt, was largely caused by Aborigines burning back the forest to create grassland for game.

What Europeans took from the aborigines was a carefully managed pastoral economy. What they saw when they first landed, according to Joseph Banks, was a landscape of open forest, gum trees and vast quantities of grass. Abel Tasman in 1642 noted Aboriginal burns occurring in the rain, but fire was kept away from waterways, protecting riparian vegetation and water quality.

When Baron Ferdinand von Mueller was Victoria’s government botanist in the second half of the 19th century, he asked for fossils found during coal mining at Wonthaggi, to be brought to him. From those he described a more diverse plantscape including gingko, oaks and various fruit trees as native to Victoria in the past.

Dr Singh asked a big question: whether modern Australians have the will, the capacity and above all the motivation to restore original vegetation.

“Humans are a dynamic part of the developing ecosystem. It is important they recognise the history of their own impact on vegetation, since they first started to use fire as a tool to change their environments around the world. It is only then they can successfully set upon a course of restoration and management.

“If we weigh the fruits of restoration purely on economic grounds, in terms of having less fire prone forests, improved soil, greater sub surface moisture storage, the existence of perennial lakes and rivers and an overall more hospitable environment for humans and animals, then surely modern humans have good enough reason to reverse the damage,” he said.

When walking through the Central Highlands with a conservation officer, I noted an Arctic beech seedling pushing through.

“We’ll knock that off with a cool burn,” he said dismissively.

Why would you do that? I asked, appalled, as Nothofagus moorei, was seen as an important relic of the Gondwana rainforests of southern hemisphere and was still there.

“Would close the canopy”, he replied.

“Yes,” I argued, “and cool the earth, improve the soil, allow insects, birds, animals and people to thrive”.

The officer was however, wedded to his history of forest. All he knew was the eucalypt loop of fire, gums and wattles quickly returning. No thought of slower growing species that might save our part of the world.

But the rain will come and the trees will green

And this day will not remember

How the devil with his tail on fire

Brought death to this land of splendour