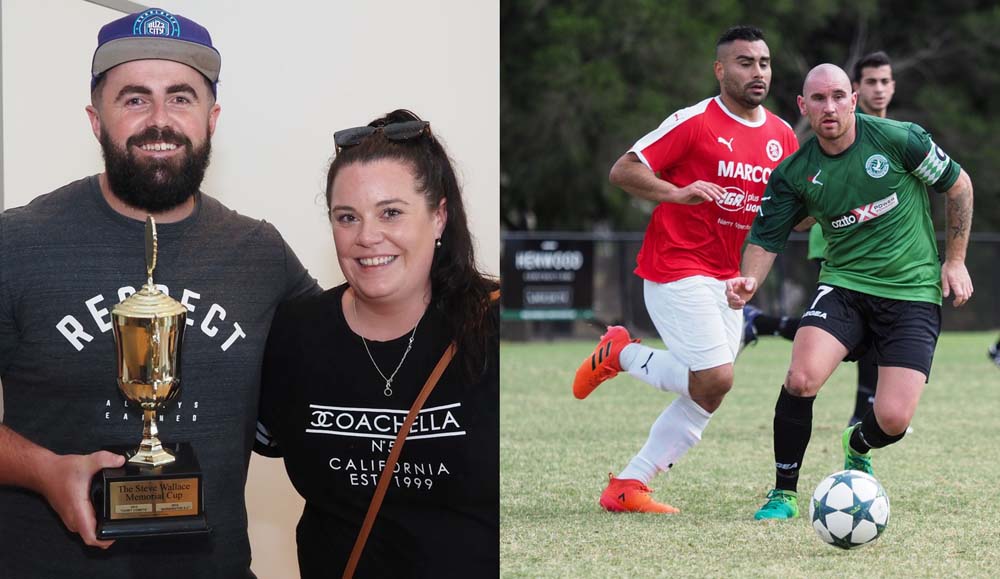 Langy’s cup success was eight years in the making as the annual event named in honour of the club’s former president had never graced the trophy cabinet at Lawton Park.

It does now thanks to penalty shootouts in the semis and final.

Langy prevailed in the first semi against State 4 outfit Seaford United but not before its less fancied opponent made life tough for the NPL2 club.

It was ironic that Webster failed to score as the veteran midfielder had played well during normal time and evoked thoughts of his Premier League days.

Despite being unfit and up against opponents who have been training for months for the upcoming season his composure in possession shone through time and again.

The other semi pitted State 1 Mornington against State 4 Baxter and although outclassed Baxter gave a good account of itself.

As Baxter gaffer George Hughes pointed out after the match his team won’t face an opponent of Mornington’s calibre again this season.

Baxter had reached the semi by surprising Skye United 2-1 in the knockout stage.

With teams locked at 0-0 in the second half a low Lewis Gibson cross from the right was touched into the far corner of goal by attacking midfielder Nat Daher and a few minutes later Liam Kilner turned superbly and unleashed a left-foot drive that beat Jonathan Crook in the Skye goal.

Mornington star Josh Hine had Baxter on the back foot in the first half of the second semi when he got clear on the right and slotted the ball past keeper Sam Greig.

Hine is a class act who could easily play at NPL level.

Hine made it 2-0 before half-time and one of the emerging talents of peninsula soccer, teenage winger Matty Harrington, made it 3-0 in the second half.

And so to the final.

Mornington had won the Wallace Cup five times in seven years and Langy was never going to take its long-time local rival lightly.

For the first time in Wallace Cup history three brothers played in the final with Callum and Luke Goulding playing for Langy and 15-year-old Ethan playing for Mornington.

Kane Bentley’s surging runs forward out of midfield were impressive and he came within centimetres of opening the scoring in the first half when he drove into the area on the left and smacked the ball off the far post.

Hine broke the deadlock in the second period.

He laid the ball off to Bentley and continued into the area as his teammate hammered a low shot at goal.

Burgess parried and Hine finished the rebound in style to make it 1-0.

Just when it looked as if Mornington would claim its sixth Wallace Cup Luke Goulding on the right rolled the ball into the path of the incoming John Maclean whose first time strike gave Mornington keeper Taylor Davidson no chance.

Langy had grabbed a lifeline and Mornington’s inaccuracy during the shootout settled the matter.

Now onto the signings.

The Londoner has been on the books of Gillingham, Bolton Wanderers, Cray Wanderers, Greenwich Borough and VCD Athletic and was league leading scorer in 2018 in his debut Australian season with Myrtleford Savoy in the Albury-Wodonga Football Association.

He switched to Murray United for the 2019 season and scooped the pool at the club’s presentation night winning the best and fairest, players’ player of the year and top scorer awards.

“Langwarrin was interested midway through last season but I didn’t want to move in the middle of the season,” Youngs said.

His preferred position is left wing but he can play as a 10 as well and if Langy gets the goals return he achieved at Murray United it will have made one of the most important signings of 2020.

Youngs nabbed 16 goals in 26 appearances in NPL2 East last season in a side that finished third from bottom.

His immediate aim is dealing with the demands of the fitness regime put in place by his former teammate at Langy and now head coach of Skye Phil McGuinness.

Ryan should have a major impact on Skye’s State 2 season.

However young striker Travis Ernsdoerfer remains sidelined through illness with no indication of when he’ll be able to return.

The big news at Seaford United is the capture of Shane Tagliaferro.

The veteran attacking midfielder renews his link with another recent signing, Scott Webster.

Both have switched from Doveton and they previously were teammates at Mornington.

Tagliaferro has had stints at Casey Comets, Morwell Pegasus and Langwarrin and can bring a serious goal threat to Seaford.

The club has done well to pick up a player who won the State 1 title last season.

Liam Kilner has already been mentioned in this round-up but he’s akin to a new signing for Baxter and head coach Hughes knows what sort of impact Kilner came make at this level.

“He knows where the goals are that’s for sure,” Hughes said.

“It’s the fitness side of it that he has to deal with and knowing when to use his explosiveness.

“He sometimes comes back into the midfield but I want him to use it up front and if he commits to what we want him to do I’m sure he’ll be one of the top strikers in the league.”

Meanwhile Football Victoria released the 2020 State League fixtures last week to a mixture of bewilderment and rancour from local clubs.

Mount Martha operations manager Cheree Lane planned to contact FV as we went to press to remind competitions that the club’s home ground was at Civic Reserve, Mornington.

Baxter’s round one home match against Dandenong South was deferred to the first catch-up round on Saturday 11 April despite Baxter having year-long use of Baxter Park.

Frankston Pines requested home games under lights on Friday nights at Monterey Reserve but was fixtured as playing home games on Saturday afternoons.

Arguably the most bizarre aspect of the fixturing was listing North Caulfield’s away games for Saturday afternoons.

North Caulfield is a Jewish club that prefers its matches to be played on Sundays and has done so for decades.

The draw was conducted at the Football Victoria headquarters in St Kilda Road and live streamed on facebook to 31,054 people.

This year’s event boasts a record number of Victorian entries with 223 clubs participating.

There are 355 clubs registered with the state’s controlling body.