Pinecliff trainers win in the wet 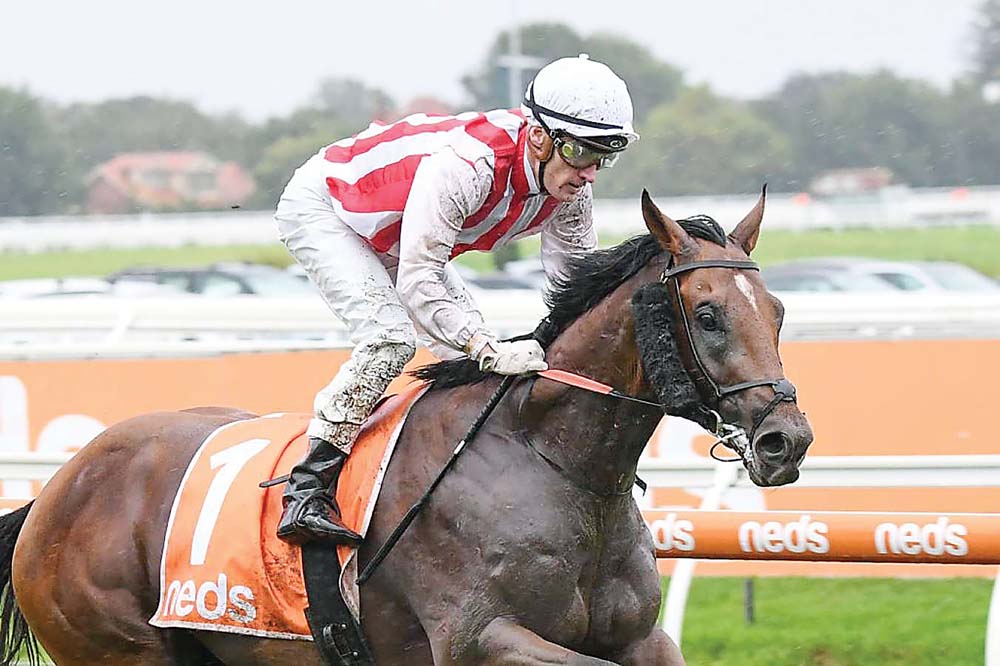 THE Pinecliff-based racehorse trainers had a day out in the rainy conditions at Caulfield on Saturday 1 February by claiming four of the nine races on the card.

Trainer Grahame Begg took out the second race of the day with impressive up-and-comer Nonconformist before striking again in the fifth race with his gutsy two-year-old Mildred.

Fellow Pinecliff-based trainer, Anthony Freedman, then made it three-on-the-trot for the Mt Eliza setup, by winning the sixth race with potential Mornington Cup hopeful, Just Benjamin, and the seventh race, being the feature Manfred Stakes, with talented three-year-old colt Super Seth.

Freedman’s running double kicked off with exciting import, Just Benjamin, who toughed out an all-the-way victory at his second Australian start. Despite saluting only narrowly, Freedman was pleased with the gutsy effort from his stayer to fight off the challenges of Sam Slick and second-favourite Aktau over 1800m.

With greater targets in the Spring, Freedman said he would likely give Just Benjamin another month before his next run before heading towards a race like that Mornington Cup which provides the winner with ballot exemption into the Caulfield Cup in the Spring.

To top off Freedman’s afternoon, the gifted three-year-old colt, Super Seth, was impressive in taking out the Group Three Manfred Stakes (1200m) first-up from a spell.

The son of Dundeel made the most of his gun run in behind the leader to kick clear in the straight for a comfortable length-and-a-quarter victory over Free of Debt and Dalasan.

The victory was the colt’s fifth win from eight career starts which has included his exceptional Group 1 Caulfield Guineas win in the Spring over Queensland galloper, Alligator Blood. His earnings now exceed $1.5 million in prize money.

He’s likely to head towards the Group Three CS Hayes Stakes (1400m) and the Group One Australian Guineas (1600m) this campaign.

Nonconformist, a three-year-old son of Rebel Raider, kicked off the winning run for trainer Grahame Begg by claiming back-to-back victories at his fourth career start. Sitting up on the speed, Nonconformist showed a fine turn of foot to over run the Shane Nichols-trained Brazen Song in the straight and score a comfortable two-and-a-quarter length victory.

Begg said the gelding has been a work in progress but he’s continuing to improve with raceday experience.

“He’s coming around. Each time he comes to the races, he’s just getting that little bit better,” Begg said. “His ring craft is getting a lot better so onwards and upwards.”

Nonconformist will eventually start to get out over longer distances, but his next target will likely be the Group Two Autumn Stakes (1400m) at Caulfield.

The tough two-year-old filly, Mildred, made it a winning double for Begg and jockey Jordan Childs by staving off the heavily-supported favourite, Aryaaf, in the straight. Leading from start to finish, Mildred was headed by the Lindsay Park galloper when turning for home but found plenty to score a length victory with a further four length gap back to third.

The first-up victory was the filly’s third win from four career starts and her second black type victory. Having been twice successful up the Flemington straight last preparation, Begg said Mildred’s next target will likely be the Listed Talindert Stakes at Flemington in two weeks’ time.