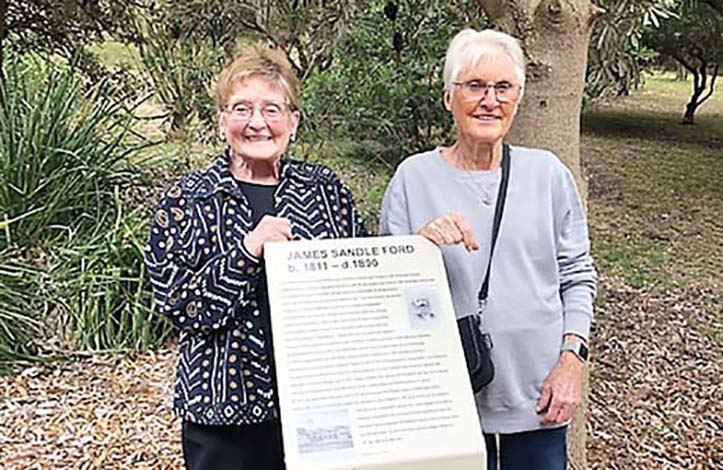 LITTLE did the judge know when sentencing a 19-year-old farm labourer to spend years in Britain’s Van Dieman’s land penal colony that his actions would have a profound effect on as yet unnamed town of Portsea.

James Sandle Ford was transported to what was to become Tasmania aboard the Eliza in 1831, a convicted fellon because of his role in an uprising of agricultural workers.

After being granted a free pardon in 1836, Ford went to Sydney in 1838, marrying Helen Sullivan in 1841. The Sullivan family had emigrated from Ireland two years earlier hoping to find employment in the Port Phillip area.

History shows that Ford, discarded by Britain, had the ability to organise and grasp business opportunities as they arose.

Three years after marrying Helen Sullivan he leased 30 acres of land at Point Nepean, the start of a career that would see him credited with naming Portsea, probably after an area near Portsmouth, the last place he saw in England as the Eliza sailed south in 1831.

Ford became an influential member of the community, building the first pier at Portsea from which to ship produce to Melbourne; helping establish the Point Nepean National School; holding a publican’s licence and running a rooming house, which was eventually transformed into the Nepean Hotel (demolished in 1971).

Ford was 79 when he died in 1890, but his contribution to to developing the Portsea area lives on in the town’s avenue of Cypress pines and now a reserve in Wattle Grove.

A sign at the reserve traces Ford’s life, and that of some of the eight children he had with Helen Sullivan.

Joan Hoskins worked with his great great granddaughter Carol Darroch, Nepean Historical Society and Mornington Peninsula Shire Council “to ensure that the last remaining parcel of land which had formed part of his original land holding was appropriately named the James Ford Reserve”.

“He owned land from Point Nepean through to what is now Wattle Grove in Portsea,” Ms Hoskins said.

The reserve joins the two sections of Wattle Grove, which is not a through road for vehicles.

Ms Hoskins said that the Melway street directly incorrectly shows “an area on the wrong side of Wattle Grove marked as the James Ford Reserve”.

“It never had this name and was never part of his land holding. The register of reserves has no record of the name there either. But the shire has verified where it was meant to be and is now named.”

Ms Hoskins managed the Sorrento Cemetery for 10 years where she found the family connections to be “fascinating”.

“I have lived in Portsea now for nearly 40 years and so know where everyone fits,” she said.

Discovering mistake in the street directory brought Ms Hoskins into contact with Ford’s descendants, eventually leading to the naming of the historically “correct” reserve.