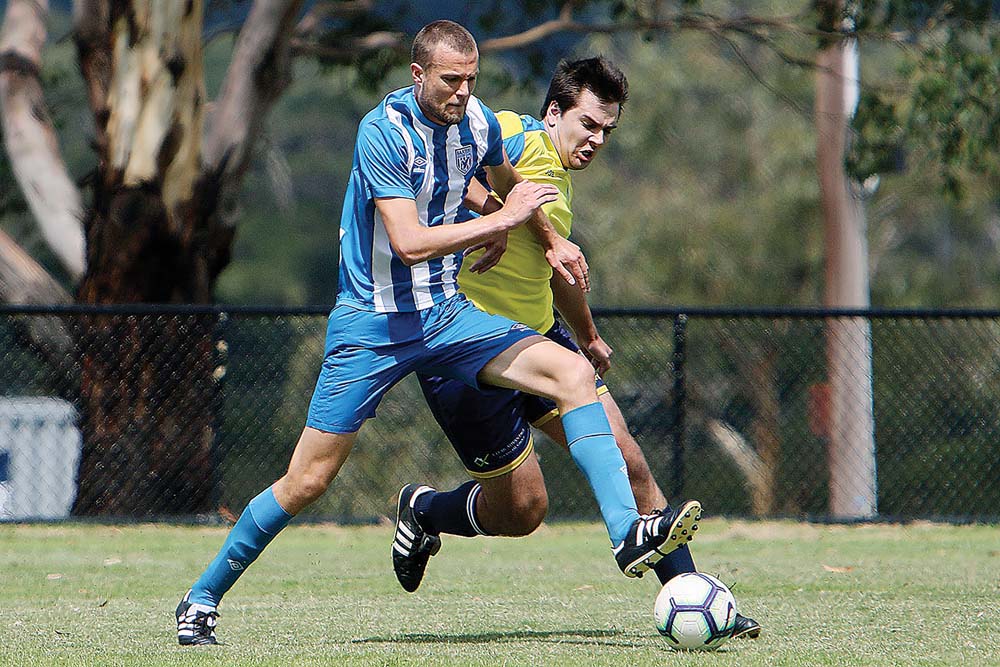 SEAFORD United and Chelsea were the only local clubs to survive last weekend’s round of FFA Cup matches.

Chelsea defeated Laverton 5-3 on penalties after the sides were locked at 1-1 after 120 minutes.

At North Seaford Reserve on Sunday the home side triumphed 3-0 over Albert Park in a match highlighted by the sending off of Albert Park’s Kyle Maclean in the 22nd minute, a twice saved penalty in the second half by Seaford keeper Justin Holland and the appearance off the Seaford bench of club legend Andy Lancaster in the 65th minute.

In the 15th minute a superb through ball from Ryan Ramsden set up Waugh but he was tripped and a penalty awarded.

Seaford player-coach and sweeper Matt Morris-Thomas converted with ease to make it 1-0.

Maclean’s second yellow for body checking Waugh ended his part in the contest and gave the home side an important advantage in the hot conditions.

A minute into the second half Scott Webster played the ball over the top and Waugh knocked it over the head of a defender as he turned inside before hitting home a low right-foot shot to make it 2-0.

In the 53rd minute Ramsden got clear thanks to a quick long throw from Waugh on the left and neatly lobbed the advancing keeper to make it 3-0.

When assistant coach Lancaster came on you’d be excused for thinking this was a Bayside Cup tie but he quickly showed his touch and despite the generation gap some of his younger teammates were put to shame as the ball bounced and bobbled away from them on regular occasions.

Webster tripped the best player on the pitch, Albert Park’s Domenic Hendry, giving away a penalty in the 81st minute.

Goodness knows why Hendry didn’t attempt the conversion because the twice taken attempts from Eric Orfanos were poor and enabled Holland to redeem himself after looking uncertain in the air in the early part of the match.

Somerville was disappointing with little potency up front and when you deliver the ball into the attacking third the way it did for the most part then recognised goalscorers such as Dave Greening have little chance of being effective.

A side story to this one was the clash of rival coaches and close friends Billy Rae of Somerville and Endeavour’s Billy Armour as the former had been appointed Armour’s assistant late last year before taking on the Somerville job.

Somerville went further behind later in the half when Brown was caught out by Francois Armansin’s volley which sailed over his head and Somerville came close to hitting back in the 40th minute when Greening struck a superbly timed volley from the edge of the area that thundered against the bar.

In the second half Somerville hit back after an excellent interpassing move on the right of the area was finished by Andrew Cook to make it 3-1.

But thoughts of a comeback were dashed via a bullet header from Endeavour’s Anthony Mesquita Varudo at the near post.

Mesquita Varudo had just come off the bench and his untracked run to get on the end of a Euclides Goncalves corner from the right was a damning indictment of Somerville’s defence.

On Saturday Baxter went down 2-0 at Baxter Park to Darebin United in their cup contest.

Baxter more than held its own for long periods but a combination of poor finishing, shoddy defending and some fine goalkeeping from Darebin’s Nick Tzoutzidis proved to be its downfall.

Charlie O’Connell raced clear in the 15th minute only to volley over and five minutes later Nico Duric and Nat Daher combined to set up Lewis Gibson who shot wide.

Two minutes later Daher was at the near post as O’Connell drove in a low cross but Daher’s first time flick was wide.

Baxter should have levelled in the 40th minute when a Gibson corner was latched onto by Daher whose shot was parried by Tzoutzidis to Matt McDermott and his header struck the underside of the bar.

In the 70th minute Burbos shot wide when well positioned but five minutes later a long low shot from Jordan Constan bounced in front of diving Baxter keeper James Foster and inside the far post to make it 2-0.

A minute later Darebin’s Frankie Drakopoulos was sent off but by then the damage was done.

Baxter has confirmed that it has lost both Stuart McKenzie and Tim Lee this season due to work commitments but it should still be very competitive especially once the fitness and sharpness of O’Connell improves.

The young striker is returning from a knee injury that stopped him playing at Mornington but Baxter is looking forward to developing his partnership with Nathan Yole who was unavailable for the cup clash.

From all reports Yole has recovered from a chronic back injury and if O’Connell stays sound physically they should play an important part in how Baxter’s season pans out.

The draw for the next round of the FFA Cup took place as went to press and included Frankston Pines along with other State 3 teams.

An outstanding goalkeeping display from Box Hill’s Christian Rossi kept Langwarrin at bay on Saturday while his counterpart at the other end of the pitch, James Burgess, let in a soft goal in the second half.

Mornington was 2-0 up against Werribee but its NPL2 opponent drew level before scoring twice in the last four minutes including a controversial penalty.

Sam Scott got through 45 minutes for the first time in nine months and there may be more good news from Dallas Brooks Park shortly.

South Springvale took the lead against Strikers after 19 minutes and the best chance for the home side fell to Ben Doree in the second half but he struck the side netting.

State 5 South outfit Aspendale Stingrays are keen to bolster their senior squad and are on the lookout for another defender, a midfielder and a striker.

The seniors train on Tuesday and Thursday at Cornish College, Bangholme at 6.30pm but plan to move to Jack Grut Reserve in the next few weeks when training will start at 7.30pm.