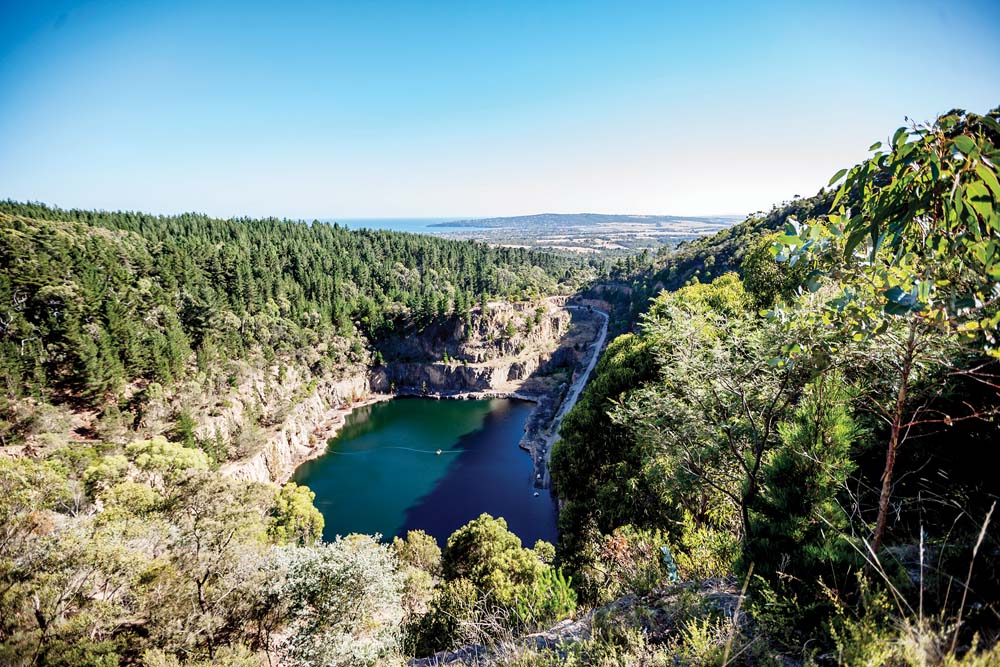 THE placid waters that fill the disused Pioneer quarry off Boundary Road, Dromana, left, fail to reflect the turmoil being caused by the latest bid to reopen gates to the site, above, for business. Owner Hillview Quarries five years abandoned plans to use the quarry as a waste tip after widespread public protest. Pictures: Yanni
Share
Facebook Twitter LinkedIn Pinterest Email

OPPONENTS of Hillview Quarries’ plan to open a new quarry on the Arthurs Seat escarpment at Dromana want the state government to buy the land and make it part of the state park.

Hillview, owned by R E Ross Trust, wants to clear up to 38 hectares (93 acres) of untouched bushland in a block that borders two sides of the old Pioneer quarry. The block of 69 hectares (170 acres) at 115 Boundary Rd, Dromana, is between two sections of Arthurs Seat State Park.

If Hillview wins permission to quarry 115 Boundary, it will extract rock right up to the old Pioneer pit, which can then be reopened and dug deeper. The final pit would be 190 metres deep (the height of 2.5 MCG light towers) and yield 70 million tonnes of rock over 70 years.

More than 300 locals and over 9000 people who have signed an online petition are calling on the state government to reject the entire proposal.

The 300 plus attended a meeting organised by Peninsula Preservation Group on Saturday 7 March at Dromana Community Hall.

Mark Fancett, president of PPG, said Hillview’s plans had bypassed Mornington Peninsula Shire, removing community appeal options, and were before state planning minister Richard Wynne. Once the crucial environmental effects statement (EES) had been prepared by Hillview’s consultants and submitted to the government, people would have 25 days to comment and there would be no right of appeal after Mr Wynne’s decision.

Dr Fancett said the new quarry would be up to four times larger than Hillview’s existing quarry.

“The will of R E Ross stated that he wanted funds to be used for the preservation and maintenance of national or public parks. How is destroying one of the state’s and region’s best remnant natural environments conserving and protecting Victoria’s biodiversity, particularly when there are alternative and well-located sources of quarry products?”

He said 82 per cent of the shire had been cleared and that Arthurs Seat, with one the biggest remaining bushland areas should be retained as it “provides a biolink across the peninsula”.

The 28 threatened species likely to occur on the site included the powerful owl, swift parrot and koala.

The meeting was attended by Liberal state MPs David Morris and Ryan Smith as well as shire councillors Simon Brooks and David Gill.

Cr Gill urged those at the meeting to “help and do the work by writing to politicians. Councillors can’t voice their opinions on the topic but this crowded hall means a lot to me”.

Cr Gill later told The News he had been told the quarry EES was being undertaken “in record time” and could be finished in May.

MP for Nepean Chris Brayne also sent a message saying many people had raised concerns about the proposed quarry with him.

“I have taken all of these up to the minister [Wynne]. While any decision is a long way off, I look forward to working with this group going forward. Any member can contact my office at any time regarding this.”

Mr Morris told the meeting the state government could “shut down the EES process now”.

In his message, Mr Hunt said the proposed quarry “has caused me great concern” and he had asked Ross Trust to reconsider its plans.

He had written to Mr Wynne “voicing my strong opposition to this proposal”.

“Proceeding with such a proposal would result in the fundamental erosion of the green wedge and widespread environmental destruction in an area renowned for its natural qualities,” Mr Hunt said.

In the week before the meeting, Mr Morris told state parliament the “massive expansion of the existing quarry” would have “an enormous impact on the landscape [and] on threatened species and communities”.

He quoted the Mornington Peninsula Localised Planning Statement: the peninsula’s natural systems “on both public and privately owned land will be conserved and managed for their habitat and biodiversity values and to maintain and enhance the experience of natural environment”.

“A quarry which will extract 70 million tonnes of granite will not maintain and enhance the experience of the natural environment,” he said.

“It is time for the Andrews government to stop hiding behind process, to stand up for the acknowledged state policy and to shut down this process now.”