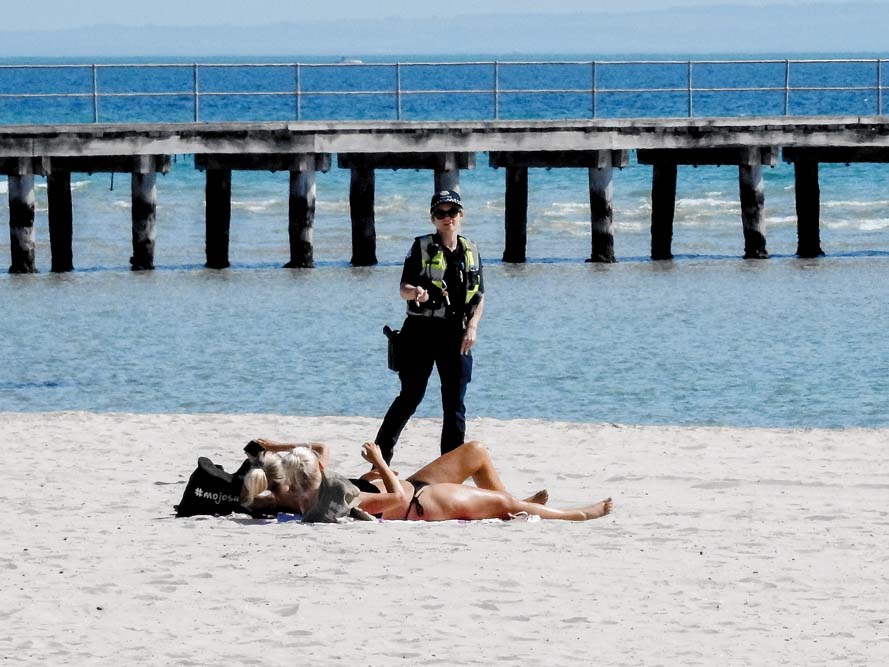 BEACHES have been closed in Frankston and across the Mornington Peninsula.

The advice was issued after crowds gathered at St Kilda beach on Thursday, despite warnings of the need to lessen the spread of COVID-19 through close contact.

The shire also received complaints about crowds at The Pillars cliff jumping site at Mount Martha.

On Saturday, police were telling people to leave shire-controlled beaches

“They [the government] told us they were going to close beaches and wanted our help by closing our beaches and putting up signs,” Cr Hearn said. “We were happy with that as we had received reports about people congregating on beaches that we manage.

“This happened despite our messages that we didn’t want people down here over the holidays.”

“People shouldn’t travel unless absolutely necessary; they shouldn’t be coming down here just for recreation, they should stay home.”

Police Minister Lisa Neville was quoted in Sunday’s The Age as saying police had been making sure people were compliant with social distancing restrictions. “If you need to go for a walk, exercise, great, but this is not about spending a day at the beach,” Ms Neville said.

An email sent to the shire’s “coastal planning team” said all beach activities were now banned, including “surfing, dog walking and swimming … following the direction of the state government and Victoria Police”.

Cr Hearn said the shire had “sat tight” after being contacted by DELWP on Friday, but decided to put out a news release on Saturday because the state government had not made its expected announcement.

Other bayside councils closed their beaches in response to the same advice from the government.

On Sunday, Cr Hearn said the beaches would be closed to swimmers and yacht clubs. Boat ramps were also closed.

Cr Hearn said hoped the ban on the public use of beaches “will be lifted in a short time”.

“We’ll keep the beaches closed over the next bit of time and then review the situation.”

Cr Hearn a keen surfer, said he knew how important the beaches were for exercise “and mental health”.

“We don’t want them closed for months and months, but this could be a circuit breaker to stop large numbers of people congregating on the beaches.”

He hoped “responsible guidelines” for the use of beaches could be formulated by state and federal governments.

“Most Australians live on the coast and the beaches are important to them.”