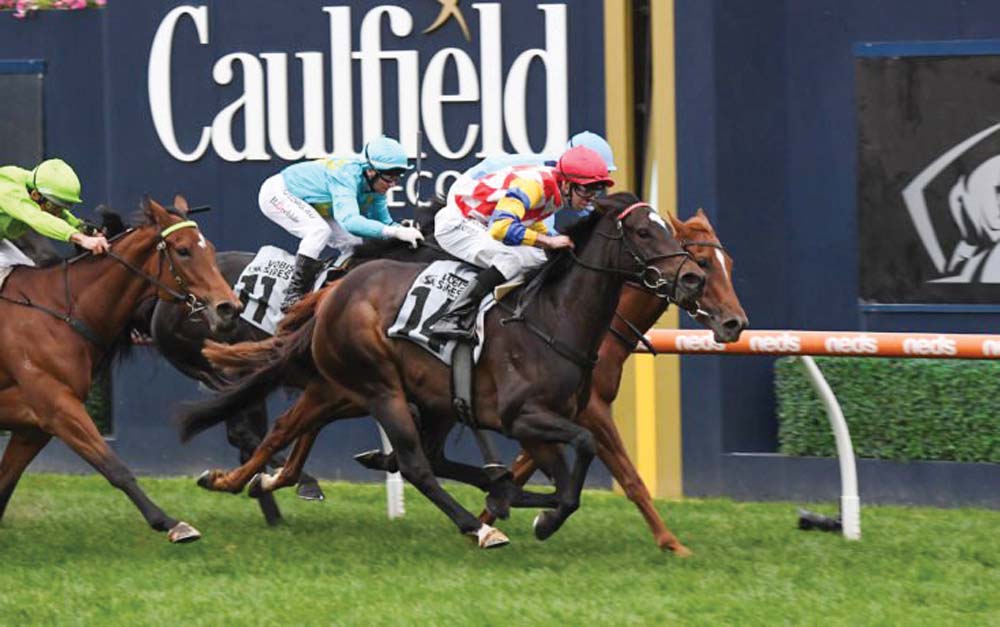 MORNINGTON-based racehorse trainer Tony Noonan has landed a blowout result at Caulfield on Saturday 18 April as his tough filly Florent took out The VOBIS Sires Guineas on the three-day back-up.

Having finished fifth over 1400m at Geelong on Wednesday 15 April, the three-year-old daughter of Fiorente stepped out once again over the mile in the Guineas at the odds of $51 before executing Noonan’s long-range plan to perfection.

The tough filly had been luckless at her first two starts this prep before landing the dream run in transit on Saturday with the aid of a nice barrier – something she hadn’t received at her two previous runs.

Florent, ridden by Noonan’s son Jake, still had to be good enough to make it count and certainly didn’t disappoint to hold half-of-a-length margin over the rest of the field.

Trainer Tony Noonan said it took a certain type of horse to be able to back-up after racing three days prior.

“You couldn’t do that with many horses,” Noonan said. “She’s only a small filly but she’s a very gross sort of filly so her racing was going to bring her to peak fitness and because she’s such a tough little filly she was one that we felt it might work with.

“She’s by Fiorente and out of a Pins mare so her pedigree also gave us some confidence that we’d be able to achieve it.”

Noonan said there were also numerous factors that decided whether they went ahead with the plan.

“She didn’t have a very hard run [on the Wednesday] so that then gave us some confidence that she might have been in a position to be able to back up but there was a number of parameters that needed to be ticked off,” he said.

“One was whether she ate up after the race, how she trotted out the next day, what her blood was like on Thursday, so all those things needed to be in place and fortunately they were all good which allowed us to go ahead with the plan.”

With Florent’s main target ticked off, she’ll now potentially progress towards a black-type race in Adelaide.

“She may go to Adelaide for a Fillies and Mares Group Two race over 1600m, and she’ll probably be nominated for the Oaks over there which is in a fortnight time over 2000m but I would think that’s unlikely,” Noonan said. “She’ll probably have two more runs here as well before she goes for a break.”

Florent was purchased for $22,000 as a yearling from the Magic Millions Gold Coast March Yearling Sale and has now raced 10 times for two wins and three placings, with prizemoney of $284,905.