Birds rest up before nature calls 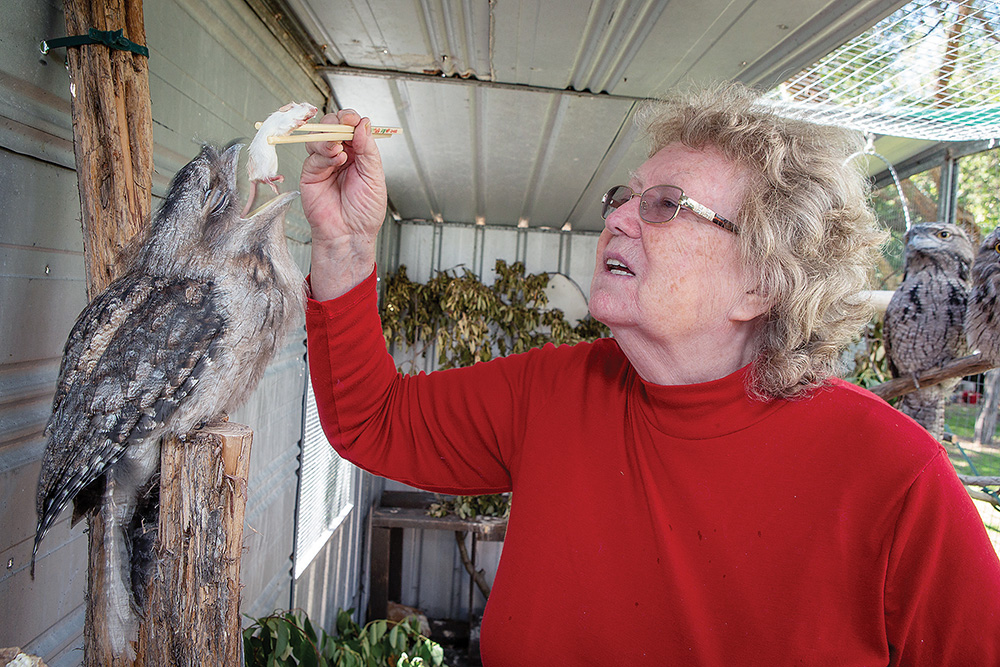 The birds, not believed to be related, were found in separate locations by helpers after falling out of their nests. Frogmouths usually build nests in the fork of a horizontal tree branch.

Ms Marmion said the areas in which the birds fell were unsafe due to predators – especially roaming cats – so they were sent to Crystal Ocean to give them a new start on life.

“The tawnies are all flying and fit and ready to go – especially one I call Stroppy which has been here for two months,” Ms Marmion said from her Highbury Road, Rye, shelter.

“I wait until they are fully fledged and can catch their prey before releasing them. I twirl meat around in my fingers and train them to catch it.”

The tactic proved problematic last week when Stroppy’s beak latched onto Ms Marmion’s finger instead of the dead mouse, giving her a painful nip. “They have enormous strength in their beaks – they are awesome birds,” she said.

Food is costly for the birds which eat mice, other rodents and moths. Ms Marmion pays $360 for 100 frozen mice from a pet shop – money which is donated by generous volunteers.

The release of the frogmouths will follow four kookaburras which also fell out of their nests in areas too dangerous to leave them. “Too many people allow their cats to roam at night,” she said. “Even though it is illegal it is not being policed.

“We are finding too many little birds injured and soon to die after being bitten or scratched by cats whose teeth and claws are toxic.”

Frogmouths were often found unconscious on roadsides after chasing moths into car headlights.

Also ready for release at a nearby property are five brush-tail possums.

Ms Marmion is especially attached to twin baby sugar gliders found under an oak tree at Rye. “Their mother died when I got there,” she said.

“Normally these animals nest in hollow native trees but people are not replacing natives anymore, so their future is precarious,” she said.

“When the NBN went through they were finding sugar gliders nesting in Telstra pits – probably the only safe place they could find.”

Ms Marmion said she had heard that people were shooting or bludgeoning flying foxes wrongly believing they were responsible for spreading the corona virus. “It’s simply not true,” she said.

Crystal Ocean Wildlife Shelter is a registered shelter which depends on donations and the occasional grant for its survival.