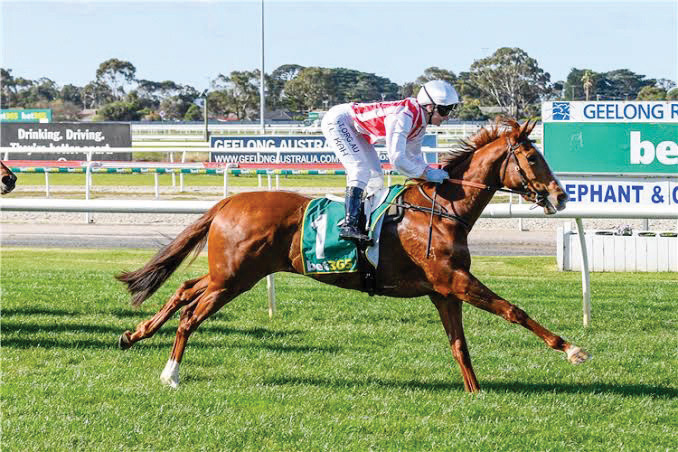 THE Anthony Freedman stable continued their successful run with two-year-old’s as Agreeable stormed home to victory to notch up their fourth individual juvenile winner for the month of May.

Coming off two encouraging jumpouts at Mornington, the daughter of Sebring reeled in her opposition to score a winning debut at Geelong on Friday 29 May.

Agreeable settled at the rear of the field under jockey Jamie Kah before sweeping past her rivals in the straight and was eased down with her ears pricked in the final 50 metres. The Piencliff Racing-owned filly ended up holding a two-length margin over the Lindsay Park-trained Aswaat and the Kevin Corstens-trained Love Sensation.

Mornington trainer Anthony Freedman said it was a great win by a filly who is far from the finished product.

“It was a top debut performance,” Anthony Freedman said on his website.

“She followed up two good jump outs and handled race day well, as she can be a highly strung filly. Jamie (Kah) rode her nicely, and she seems to get on with her really well.”

Being bred out of a Listed two-year-old winning mare who managed to show her best of a mile, will likely see Agreeable head in a similar direction.

Freedman said he is now considering aiming Agreeable towards the three-year-old fillies features in the Spring.

“Going off what we have seen at home and being by Sebring, she looks like she will get out over further so races like the Thousand Guineas (1600m) and Wakefield Stakes (2000m) could be nice targets for her,” he said.

“She has had a positive experience, so she’ll improve from that and she’ll improve again with another spell. She’ll have two or three weeks in the paddock now and we will get her ready for the three-year-old fillies’ races through the Spring.”

Pinecliff Racing in combination with the Freedman stable have had some serious talent head towards the Thousand Guineas in previous seasons with Southbank (2019) and Shoals (2017) both finishing in the placings.

Shoals later went on to win the Group 1 Myer Classic (1600m) at her next start before adding the Group 1 Surround Stakes (1400m) and Group 1 Robert Sangster Stakes (1200m) to her page the following year.