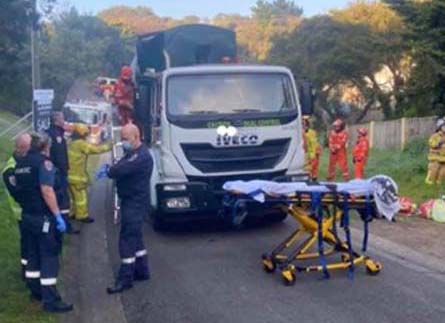 A MAN who somehow found himself inside a 240-litre green bin at Rye can thank an alert garbage truck driver for possibly saving his life, Monday 29 June.

The truck was emptying curb-side bins when the driver, watching his CCTV monitor, saw what he realised was a man falling out of the bin into the garbage compactor in Tarawill Street, 8am.

Rye CFA incident controller Eddie Matt said the 21-year-old appeared to be OK after the fall although he had injured his leg and could not stand.

“Sorrento SES crews got him out of the back of the garbage truck and he was stabilised by ambulance officers,” Mr Matt said.

An ambulance took the man to the Rye football oval from where he was airlifted to the Royal Melbourne Hospital with “serious but stable injuries”.