Brooklyn Hustle back with a bang 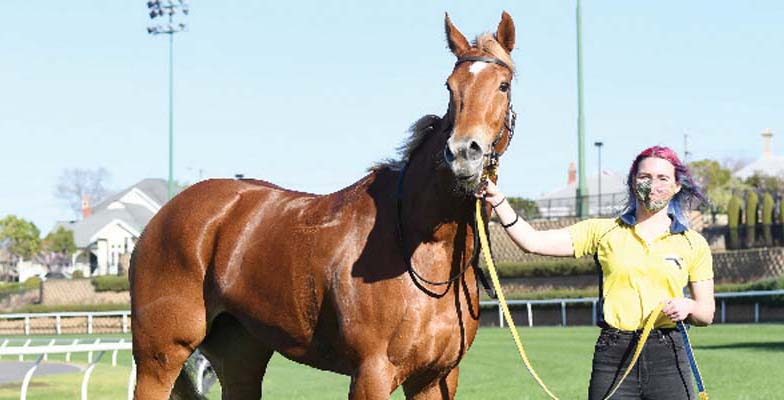 JASON Warren’s star mare Brooklyn Hustle returned in sensational fashion on Saturday 1 August with a dominant victory at The Valley.

Reminiscent of her debut victory at the track as a two-year-old, Brooklyn Hustle settled at the rear of the field before storming past her rivals in a matter of strides to take out the benchmark 78 event by a comfortable 3.5-lengths.

It wasn’t all smooth sailing for the Group class performed mare who had to overcome some traffic issues rounding the bend, but her electrifying turn of foot and a well-executed ride by jockey Dwayne Dunn paid dividends.

“It’s good to have that monkey off our back,” Warren said post-race. “She’s been carrying a few knockers and she did such a tremendous job last prep. She was hampered by issues right before she even had her first start so to get her back here today in such good order, it’s just a tribute to Rosemont Stud and Mark Young and my team back at home.

“She came here today off one soft jumpout, and we came here looking to use this run as a second trial going into better races so I’m pleased to see her resume as well as we knew she was quite capable of.”

Jockey Dwayne Dunn said he felt her quality from the moment he left the mounting yard.

“She’s all class,” Dunn said. “As soon as I cantered off on the track you could that she’s a machine. We’ve seen it before, and we need to see it again.”

“I think today’s event was more about getting her confidence back and getting her back as good as what she was. Hopefully she can go onto bigger and better things.”

The four-year-old daughter of Starspangledbanner performed at the elite level as a two and three-year-old filly. As a promising two-year-old, Brooklyn Hustle was a leading contender for the Group One Blue Diamond Stakes before finishing 1.4-lengths off the winner Lyre, who is now a subsequent three-time Group One placed mare.

Despite not looking at her absolute best, Brooklyn Hustle still returned as a three-year-old and placed in the Group Three Blue Sapphire and claimed fifth in the Group One Coolmore Stud Stakes.

Warren is hopeful she can reach the promise she showed in her younger years and return to the elite level.

“I took a bit of a bold step coming here today off the one jumpout but I believed in the horse so much and I just feel that she’s on her way up,” he said.

“I’m not going to put the cart in front of the horse. We just want to get today out of the way and see how she pulls up. It’s just so pleasing for everybody involved and we’ve really had to be patient with her.”

If all goes to plan Warren plans to have the mare back at the races in “three or four weeks”.