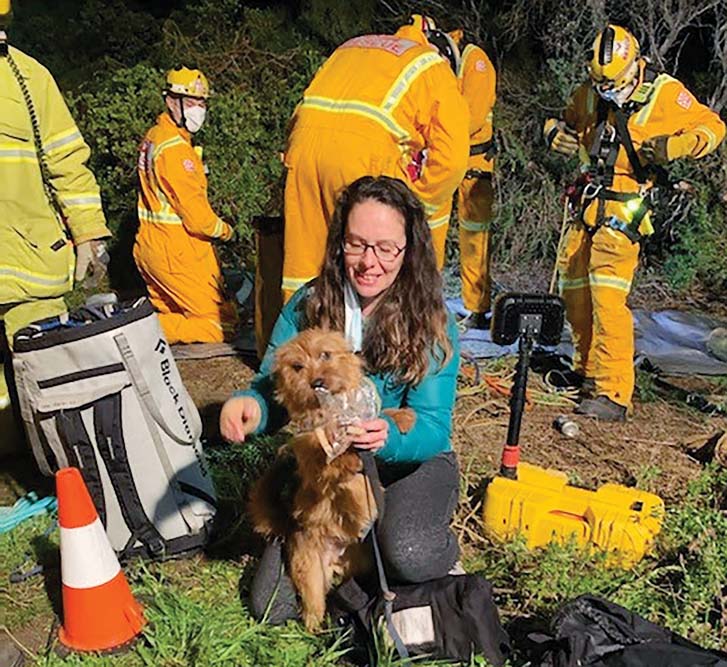 In safe hands: An excited Nelson is comforted by owner Medha Murtagh below, and, below left, a member of the Dandenong high angle rescue crew abseils down the Mount Martha cliff. Pictures: Supplied
Share
Facebook Twitter LinkedIn Pinterest Email

EXCITED puppy Nelson was none the worse for wear after a potentially disastrous cliff plunge at Birdrock beach, Mount Martha, last week.

The Australian terrier tumbled while running and fell 15 metres down the cliff while being exercised by owner Medha Murtagh on Saturday evening, 25 July.

She said later on social media: “We were walking along Craigie Road when I tripped and fell and Nelson ran across Craigie Road and the Esplanade and then [fell] over the cliff.

“I was beside myself. Thank you to everybody who stopped and helped and to our extraordinary emergency services. We live in a spectacular community and we could not be more grateful.”

About 25 CFA members from Mount Martha, Mornington and Dromana assisted the Dandenong high angle rescue crew abseil down to Nelson and rescue the seven-month-old in a two-and-a-half hour operation.