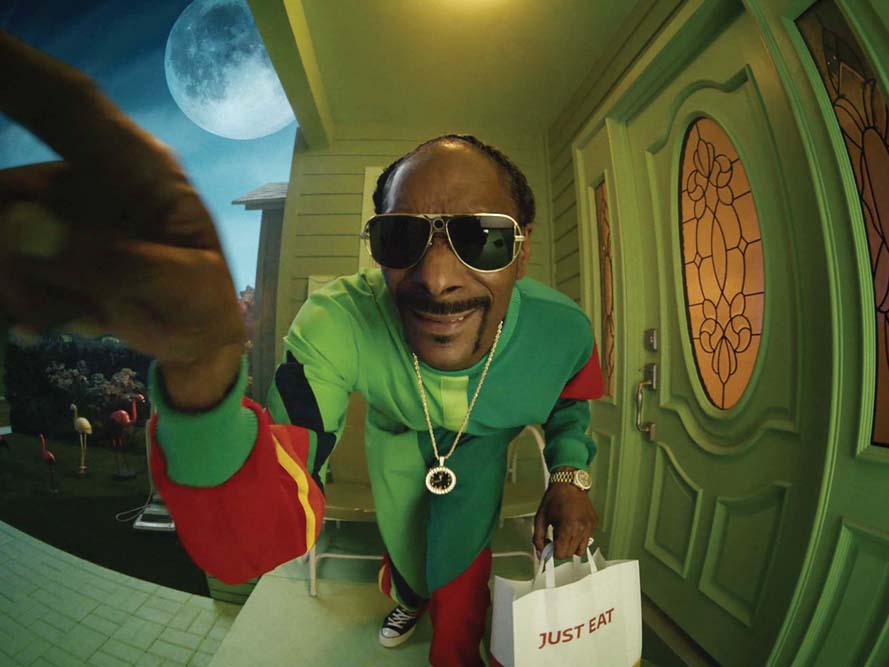 IT’S done. Human culture has finally reached a point at which it can never be bettered. After thousands of years of evolutionary development that included the Renaissance and the Industrial Revolution, we can now take our collective foot off the pedal safe in the knowledge that things, put simply, have just reached a glorious high water mark that leaves us all better off. Somebody call Charles Darwin, because evolution is now officially complete. That’s because I’ve just seen a TV advert featuring Snoop Dogg for a food delivery service. This is a glorious development that should be celebrated by everyone. Alternatively, the lock down is starting to get to me.

Eyes are not the windows to the soul. Television is. I’m not ashamed to say it – I’ve been watching heaps of television lately. Not just ads, either, but whole actual programs. When we were kids, we were told that sitting all day in front of the TV would make your eyes turn square. At this rate, my peepers are nothing but right angles, such is the rate at which I’m consuming content. It’s one of the few activities that being in lockdown encourages. It’s said that one of the symptoms of coronavirus is a loss of taste. That likely explains the decision to screen ‘The Bachelor in Paradise’ during a pandemic. It would certainly account for why people watch it. As best I can tell, ‘The Bachelor in Paradise’ is kind of like ‘The Avengers’ equivalent of ‘The Bachelor’ franchise. While it makes perfect sense when you see these characters separately and in their own context, sometimes madness takes hold and you end up throwing both caution and, presumably, substantial amounts of money to the wind by sticking them all together for no apparent reason and hope like hell the results are something more than a discombobulated wreck. It never works.

The show is all about courtship, in a ‘Gilligan’s Island meets an open-bar’ kind of way. To date, I’ve seen little in the way of poetry readings, dueling or waltzing. There are, however, heaps of rippling torsos and bikinis. If there was a glass slipper on ‘The Bachelor in Paradise’, it would surely be used for the sole purpose of skolling some kind of alcohol-based rocket fuel.

I’ve come to learn that the ‘Rose Ceremony’ is something of a tremendous disappointment featuring, as it does, an actual flower instead of a box of Cadbury Roses. Nothing says ‘I love you’ quite like a Hazel Whirl. (Note: none of this year’s contestants is named ‘Hazel Whirl’, although that would be awesome.)

But it’s not just dating shows; I also admit to watching ‘The Voice’. Mostly, it’s to make sure that nobody else steals the song I’ve chosen for my own ‘Blind Audition’. Thankfully, none of the contestants performed ‘Drop It Like It’s Hot’ by Snoop Dogg featuring Pharrell this year.

It’s the lyrics that speak to me – ‘When the pimp’s in the crib, drop it like it’s hot’. It’s as though he took a page right out of my life. Instead of Snoop Dogg, people played a bunch of songs I’d never heard before but that everyone on the show seemed to already know. It included a lot of something called ‘Lewis Capaldi’ which I later looked up on the Internet and seems to involve a bowl of porridge with hair and eyes.

Although Snoop didn’t make an appearance on ‘The Voice’ he cropped up unexpectedly during the adverts. It’s almost made lockdown worthwhile.

I’m not sure why I identify so strongly with Snoop Dogg. Perhaps it’s because he and I are exactly the same age. Although the similarities pretty much stop there, we’re both partial to a tracksuit and each of us has, in our own way, an incredible flow from upon which we’ve built an empire of rhyme. No, really. He emerged on Dr Dre’s album ‘The Chronic’.

Dr Dre, it should be noted, is not a doctor in a conventional or, indeed, any other sense, but is a very skilled producer, famed for the invention of G-funk. Which, for those of you who don’t know, is a type of music notwithstanding that it sounds like a fungal infection you might find between your toes. Unlike a fungal infection, Dr. Dre became a billionaire by making headphones. As you do.

But the world that Snoop rapped about back then was very different to the one I knew. But now our interests are aligned. Fast forward thirty years and he’s appearing in an advertisement extolling the virtues of eating pizza while sitting in a hot tub and getting tacos home delivered. It speaks to me. That, in a nutshell, sums up the world we now live in.

It’s just as well that tacos are my spirit animal. And although by watching heaps of television I’m seeing the best that human kind has to offer, I feel I might be going ever so slightly backwards. No doubt, it’s time to send a message to Snoop Dogg and ask him to drop off a green chicken curry. No doubt I’ll drop it like it’s hot. Then I’ll wash it all down with a Hazel Whirl. Delicious.