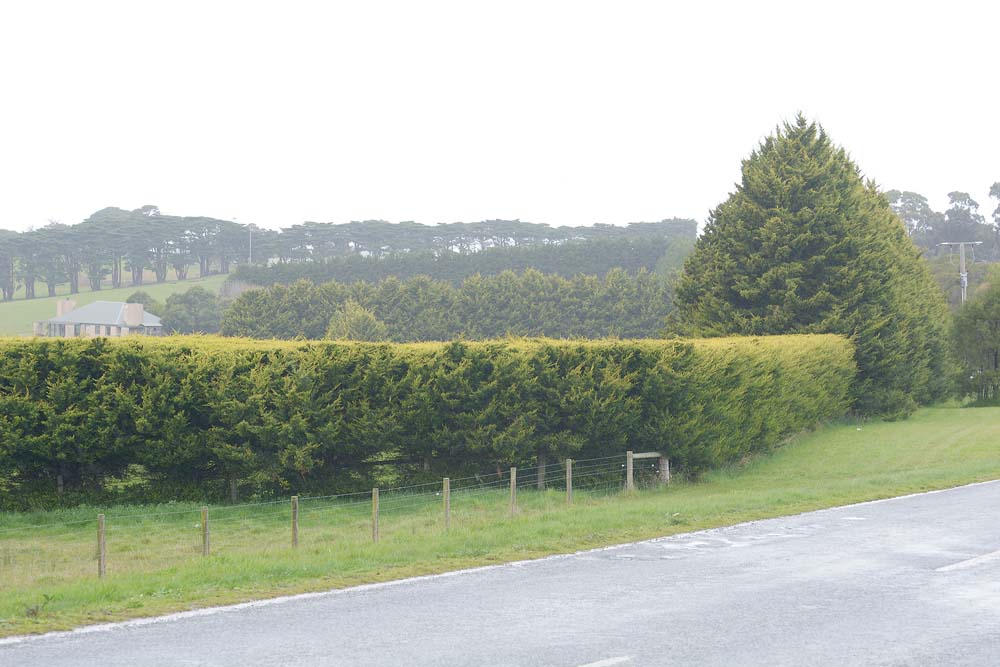 ONE person’s hedge can be another’s view blocker. Hedges on the Red Hill-Flinders Road include native trees as well as Cypress pines, above, as well as one that appears to have been trimmed, left, to preserve the view. Pictures: Keith Platt
Share
Facebook Twitter LinkedIn Pinterest Email

IN some countries hedges are a thing of wonder. They are regarded as tourist attractions and the life that goes on in and around them is often illustrated in children’s books.

But hedges, it seems, are not held in such affectionate regard on the Mornington Peninsula where laws are being considered to prevent them “blocking iconic view lines”.

Shire officers were on Tuesday 23 June instructed to begin the process to amend the local law to prevent “Cypress pine and other exotic” plants and trees being used for hedges that block “iconic view lines”.

The regulations will also extend to preventing hedge being planted on or near property boundaries abutting roads within green wedge zones. The officers, when reporting back to councillors this month are also to suggest “possible solutions” to rural fences “that are known to also block out iconic views on the Mornington Peninsula”.

Councillors agreed to Cr David Gill’s suggestion of amending the local law despite warning from an unnamed officer that the move “will be a contentious issue that is likely to generate a vigorous response and legal challenge from the landowners if they are required to cut down trees and replace fences”.

Cr Gill later told The News that his motion was aimed at “people buying bigger blocks [in rural areas] to build McMansions, putting in privacy hedges and blocking iconic views”.

“This is not about legitimate farmers protecting their crops and animals with windbreaks or shelter belts.”

Cr Gill said farmers’ rights to have hedges as windbreaks were protected provided they had a farm management plan.

While no one is suggesting such severe action this time around, more than two decades ago several of Melbourne’s wealthy suburbs were hit by a “hedge burner”. The “mastermind” behind those actions later confessed to being more interested in publicity than improving the public’s viewpoint.

However, it could be argued that parts of the peninsula’s landscape are just as manicured and modified as those seen throughout England.

Hedgerows are regarded as the most widespread semi-natural habitat in the UK, providing a refuge for wild plants and animals.

With the peninsula having just 10 per cent of its “natural” bushland remaining, hedges, windbreaks and fences are possibly just as important for wildlife.

The advice from the anonymous officer to council said money would be needed to be allocated “for the increased legal costs that will be generated”.

“Further expert legal advice will need to be sought after the evidence base has been established to determine the extent to which council can control plantings on private land,” the officer stated.

The officer estimated it would cost $100,000 to carry out council’s wishes before a scheduled review of the local law in 2021.

Councillors rejected the officer’s alternative move that an evaluation be made of “the extent to which new plantings and high fences are having an impact on the glorious landscapes and seascapes that residents and visitors enjoy, looking across the green wedge”.