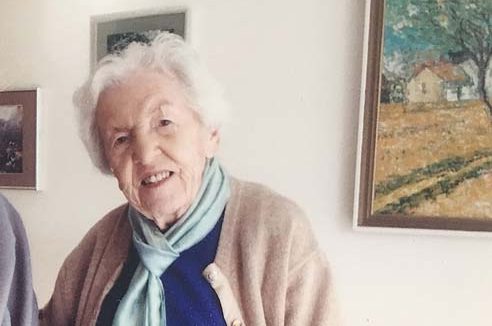 AGE offers insight and understanding; it provides a well-rounded perspective on life’s events often overlooked by a youth-focused society.

The benefits of longevity certainly haven’t been lost on Mornington 107-year-old Thelma Kirkman, who can look back on her experiences during the momentous events of the early-to-mid-20th century: World War I, the gay 1920s, Great Depression and the foreboding and horror of World War II.

More relevant to today’s events, she can remember seeing people “dying on the streets” during the 1918-20 Spanish flu epidemic, which infected 500 million people – about a third of the world’s population at the time – in four successive waves. It reportedly killed 50 million people.

Life moved on and, after growing up and marrying, she and husband Dick migrated to Northern Rhodesia (later Zambia) where she was secretary to the Bishop of Zambia and Dick worked at the British government printers.

When her children Pat and Hugh were old enough to attend secondary school the family moved to Cape Town and, with their schooling finished, resettled in Hobart in 1953.

Daughter Pat Cooper recalls her mother’s excitement when Queen Elizabeth was visiting Australia. At that time Thelma was secretary to the Tasmanian state librarian and Dick was a linotype operator.

The mainland beckoned and the family moved to Melbourne in 1960, settling at Box Hill North and, several years later, Kew.

Thelma’s organisational skills were again in evidence as secretary to the state president of the Australian Primary Producers’ Association where she ran meetings for farmers all over Victoria. Dick remained in the printing industry.

Keen travellers – and fluent in French and German – Thelma and Dick visited Europe numerous times from the 1960s-1990s. At 93 Thelma went to Vietnam and visited her son Hugh and his family in Bangkok, Thailand.

Realising they “wouldn’t be around forever”, Thelma and Dick downsized to Mount Eliza where they lived for 25 years. They also became Australian citizens before Dick died 10 years ago.

Pat said that after “a few falls” and “aware of the burden of old age” Thelma, at 103, moved into Benetas Corowa Court – Residential Aged Care.

The 107th celebration held earlier this month was subdued due to COVID-19 restrictions, with Thelma eating cake and listening to the birthday song in the garden.

There were no candles on the cake. “We certainly could not fit 107 candles on it and I had my doubts that she could blow that many out,” Pat said. “Anyway it’s not the time to be blowing air.”