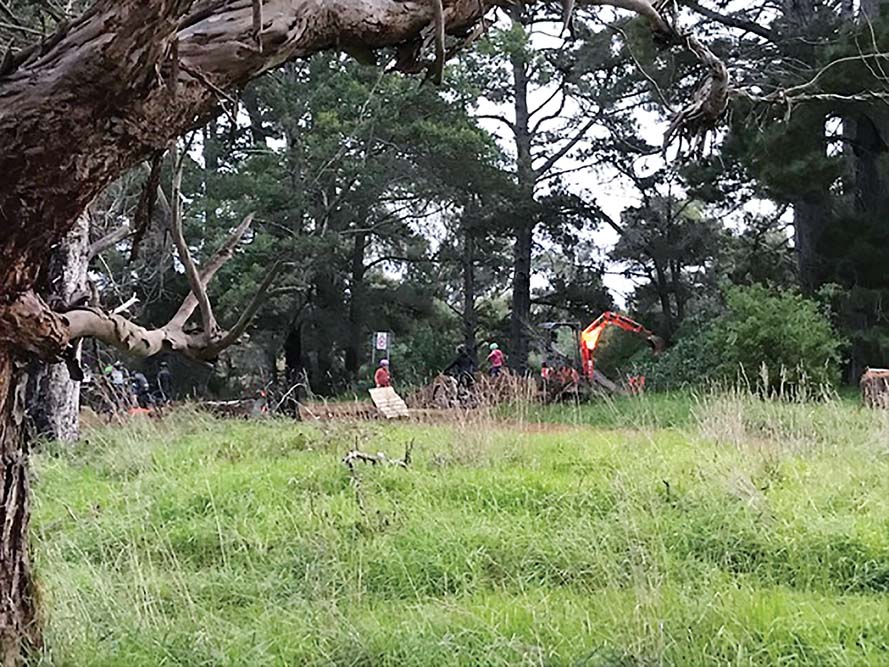 YOUNGSTERS are doing it for themselves following playgrounds and skate and BMX ramps being declared out of bounds because of the stage four coronavirus restrictions.

Informal BMX ramps and accompanying bike tracks have sprung up across the Mornington Peninsula, many within protected bushland reserves and parks.

But it’s not just enterprising youngsters digging in to build the BMX tracks.

Parents have used excavators at Somers and Flinders to help their children build BMX tracks.

The track at Flinders between the football oval and cemetery in Stokes Street “started with the kids just using spades … and has progressed through to parents using excavators and dumps of soil to create a huge track complete with constructed wooden ramps”, one resident has told Mornington Peninsula Shire.

The area is declared leash-free for dogs and the resident said that besides “the illegality of using council land like this” concerns had been raised about collisions between bikes and dogs and people falling into holes.

In Mornington, an ad hoc BMX track in the Mitchell Street reserve was also built with the help of parents.

One resident who did not wish to be named, told The News she had suggested another, more suitable area but the youths “just continued on with their destructive actions to our park. It is a very real danger to everyone who uses the park”.

“It’s really just vandalism. I can’t believe no one has put a stop to it. The [Mornington Peninsula Shire] council should put up a fence and signs saying offenders will be fined.”

“We can’t just say no, we need to help them find alternatives.”

Executive manager infrastructure services Jessica Wingad said while assessing the reserves and parks “used without permission for the construction of bike jumps” the shire “understands the energy, creativity and enjoyment of those involved.”

Ms Wingad said the bike jumps posed unacceptable risks to other park users and damaged bushland and public parks. “Our policy is to remove these,” she said.

“We are reviewing our response times and priorities for intervention. We understand the energy, creativity and enjoyment of those involved and will investigate longer-term options to respond to this need in a safe and collaborative way.”

Cr Gill has suggested that if the shire looks at sites on a case by case “perhaps some of the issues could be resolved by allocating nearby areas to small community bike projects”.

Cr Gill says land over the south eastern outfall which traverses much of the peninsula and ends at Gunnamatta could be reserved for use by the public, including BMX and bike trails.

He has asked state MPs on the peninsula to help provide suitable sites “so that the health and wellbeing of our younger generation is better catered for in this period of uncertainty and growing anxiety”.

Cr Gill said the shire had been priced out of buying some parcels along the outfall route because the government valued them after rezoning the land to residential.

“This land is gradually being sold to the highest bidder by the state government without regard for community needs,” he said.

Mornington MP David Morris said use of the outfall land was “exactly the sort of issue” being looked at by the Legislative Assembly’s Environment and Planning Committee.

Mr Morris, who is deputy chair of the committee, said it was investigating community access to parks and open space, sporting fields, forest and bushland, wildlife corridors and waterways.