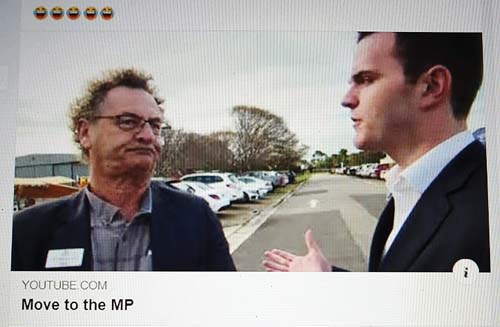 A CLEVERLY edited but misleading video disparaging Mornington Peninsula Shire, its staff and Cr David Gill has encouraged one viewer to comment: “That guy needs shooting.”

Clearly made in support of Tyabb airfield, a link to the video has been included in the latest edition of Peninsula Aero Club’s newsletter, The Tyabb Flyer.

The mayor Cr Sam Hearn issued a statement “to remind everyone” that “misleading or inaccurate information” about candidates in the October municipal elections is against Victorian Electoral Commission regulation.

Shire CEO John Baker said: “Council is aware of the video that is clearly misrepresenting the council and some councillors. It is obvious that the video is deliberately designed to mislead and denigrate and is factually inaccurate.”

A screenshot of the video is reproduced in the PAC’s online Tyabb Flyer newsletter with the heading “Council’s attitude to various matters a cleaver [sic] and amusing insight!” with a link to the video underneath.

Cr David Gill, who is named and depicted in the video, said he had received death threats “way in the past”, but hoped potential candidates would not be deterred “because of how they could be treated”.

He had asked the shire to investigate the legality of the video but knew “it is wary of escalating the situation”.

“The video is clearly designed to mislead people over my, and the shire’s, position,” Cr Gill said.

“It shows people are prepared to do anything, but for us to combat it means getting down to their level.

“To have people talk about someone needing to be shot is unAustralian.

“I can only point out that vested interests must be behind this.”

Cr Gill said allegations were also being spread about him “buying land around the airfield for housing, but it’s on the public record that I’ve got nothing other than my savings and no other property than my home”.

“These are lies and it’s time for these supporters of the airfield to be exposed for this type of behaviour.”

Cr Gill says he is the only councillor in Victoria to have refused to accept the stipend awarded to councillors for their work.

“I have never once claimed expenses and decided to reject the stipend because there are so many others in the community doing it hard since the outbreak of COVID-19,” Cr Gill said.

Peninsula Aero Club president Jack Vevers said he did not know anything about the video or where it came from, “but I guess it’s what the community is saying”.

“Sure, some parts are misleading, but there’s a lot of truth in there too, and exaggeration” Mr Vevers said.

Asked if he objected to being in the video, Mr Vevers said he had not given consent: “I never like being in anything, to be honest, but now people seem to do whatever they like.”

Mr Vevers did not see any problem including a direct link to the video in the PAC’s newsletter, saying that it was on YouTube and all over Facebook and had been viewed about 6000 times.

Asked about the “that guy needs shooting” comment, Mr Vevers said he did not want anything to do with violence. “I’ve no control over these things, you won’t see anything even remotely like that on our website.”

In an email to The News, Mr Vevers said the name  attached to the shooting comment “is not a PAC member and I have no idea who they are”.

“This comment is completely unacceptable and shocking to read.

“In terms of the video, the author/s are unknown to me and PAC is unassociated with its production and has no involvement whatsoever.”

The video, which uses footage taken at the airfield last year by Channel 9, graphics and even an unauthorised  still from The News, depicts the shire’s “customer service team” as baton-wielding soldiers “making sure everyone follows the rules”.

A grab of Cr Gill speaking about one of his favourite topics, native bees, has been cut to “a docile population”.

Mr Vevers is shown saying “these guys for some reason just went nuclear. They came in with boots on and closed us down”.

The next shot shows demonstrators being hit with batons while a female voiceover declares “a quick visit by our customer service team and the issue was all sorted”.