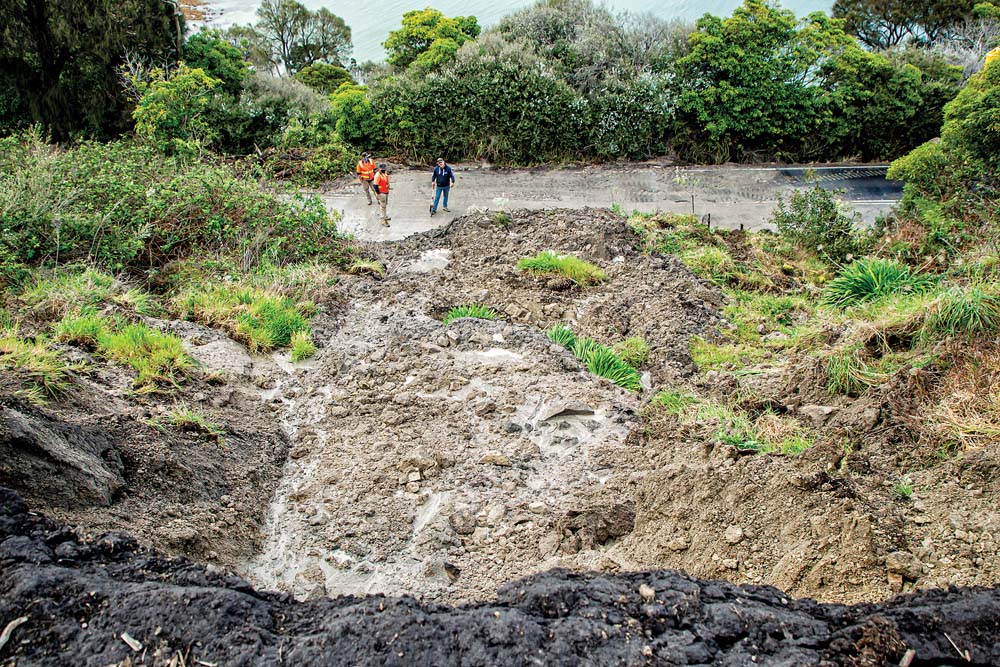 WORKERS clear the Esplanade, Mount Martha, above after a landslide on Thursday. Below, the scene that greeted drivers before road blocks were installed. Below centre, Graeme Ainsley believes the landslide was caused by poor drainage, left. Pictures: Yanni and Josie Jones (below)
Share
Facebook Twitter LinkedIn Pinterest Email

STORMWATER run-off is being blamed for a landslip which closed the Esplanade at Mount Martha last week.

The scenic, two-lane road was closed between Bradford and Ellerina roads after about 2200 cubic metres of soil and debris came crashing down, Tuesday 29 September.

Up to 14 workers using excavators and front end loaders worked to clear the soil while Mornington Peninsula Shire Council engineers assessed the stability of houses above the road. The council also installed water barriers on an upper access road.

The shire on Friday said it hoped the road would be reopened sometime this week.

Graeme Ainsley, of Ellerina Road, said that during 50 years’ living and visiting the area he had become aware of stormwater flowing over and under the ground causing washaways.

“The same thing happened about 10 years ago,” he said. “It’s stormwater from the houses up the back [fronting Bradford Road] which back onto me.”

Mr Ainsley said he had also been told by a South East Water employee that mains water from a burst pipe up the hill had been welling up over the past few weeks. This had added to pressure on soil below before it finally gave way last week.

He said storm water pipes should have been laid at the same time as sewerage pipes.

The VicEmergency app warned residents and drivers to stay away from the landslide “as it can continue to move for days afterward”.

Department of Transport director of metro assets Mark Koliba said most of the debris had been cleared by Thursday, but the road would be closed until a geotechnical engineer was satisfied it could be reopened.

He said the department would then “work on long-term rectification plan”.

Motorists were advised to use the Nepean Highway between Mount Martha and Safety Beach. A neighbourhood detour was suggested via Bradford Road, Forest Drive, Nepean Highway and Bruce Road.

The collapse of the road after heavy rains in mid-2012 led to it being closed for a month south of the old quarry prompting Mornington MP David Morris to call for a cultural heritage management plan before any extensive road works were carried out.

In August 2013, a section of the Esplanade between Hearn and Bruce roads was closed for a week after an old terracotta drain failed. It was replaced by a concrete pipe.