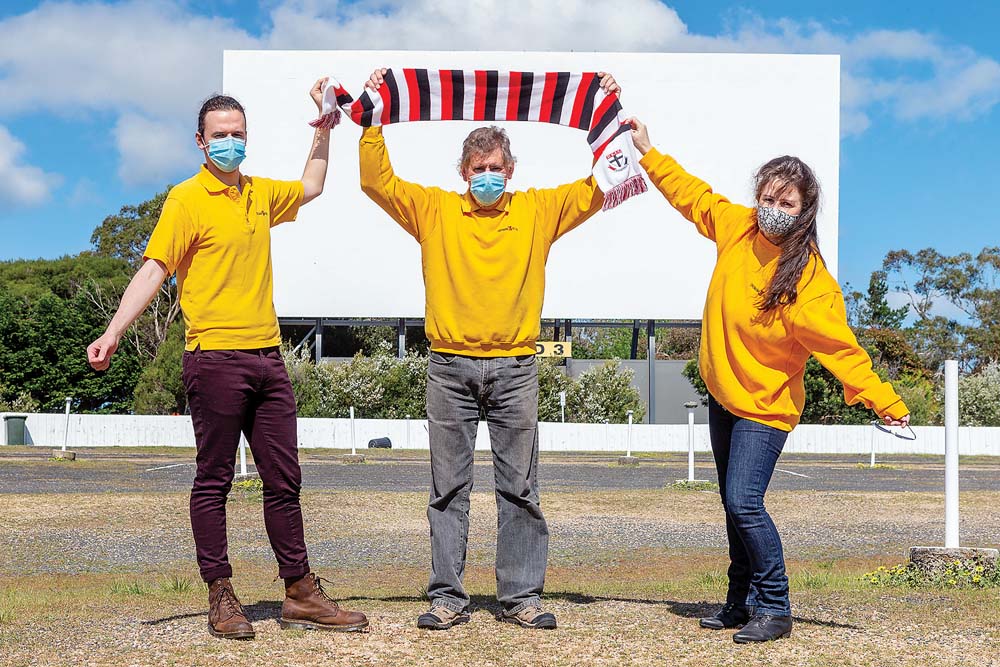 THE Saints won’t be marching in, but Dromana Drive-In’s Paul Whitaker, son Joshua Whitaker and wife Shelley are hopeful of being able to show the grand final on the big screen next week. Picture: Gary Sissons
Share
Facebook Twitter LinkedIn Pinterest Email

DROMANA Drive-In has scored two quick goals in getting permission from the AFL and Channel 7 to live telecast the AFL Grand Final.

But the result won’t be known until owner-operators Paul and Shelley Whitaker get the nod from the state government to screen the event before an anticipated crowd of hundreds on Saturday 24 October.

Following on from the successful Saints versus Bulldogs match at the drive-in last June, they said that to host the big game on Victorian soil “would be so important for many fans and even those watching for the first time”.

“It’s been a team effort from both ends of the ground in trying to convince the government that the event will be safe, and then obtaining permission from the AFL,” Mr Whitaker said.

The diehard Saints fan says he wrote to Premier Daniel Andrews, his ministers, other MPs, Opposition spokespeople and government departments. “You name it and I contacted them. But I didn’t get much reaction.”

Mr Whitaker then handballed over to Nepean MP Chris Brayne, who drilled the ball to sports minister Martin Pakula who, coming off the bench, tapped Marcus King from AFL Broadcasting on the shoulder and things began moving.

After halftime, Mr Whitaker began working the wing with Heath Walker from AFL marketing and stirred up a bit of a fracas to get the crowd onside with cheering and writing letters of support.

He said: “I’m not sure who set up the play, but the Premier took the final mark and, with the siren about to sound, has a shot at kicking the winning goal.”

Mr Brayne is backing the plan: “Many people in the community have raised the Dromana Drive-In and the prospects of them holding a Grand Final event, particularly after [CEO] Gillon McLachlan’s comments earlier in the week expressing his support,” he said.

“Subject to the data and public health advice, I think this is a really exciting opportunity to showcase the Mornington Peninsula nationally and bring the community together in a COVID Safe way, particularly given the huge mental health benefits of enjoying the footy”

Mr Andrews has stated he intends announcing a possible easing of COVID-19 restrictions on Monday 19 October. Hopefully, this will include kicking the ball straight through the big sticks and giving the nod to the live telecast at Dromana Drive-in.

That simple act would, almost certainly, give him the equivalent of a Brownlow Medal.

Tickets for the big game at the Dromana Drive-In go on sale from Sunday 18 October. “If our event is cancelled due to restrictions not being relaxed, all monies will be refunded,” Mr Whitaker said.