Digging in: Children wasted no time in trying to rebuild their bike jumps which were flattened by council workers using a bobcat at a reserve in Mountain View Road, Mount Eliza. Pictures: Yanni (above) and supplied (below)

KIDS were out in the fresh air, using their initiative, having fun, and letting off steam last week on improvised bike ramps – but some people saw their antics as vandalism of a public park and leaving a mess for others to clean up afterwards.

The two schools of thought have parents on one side happy to see their kids occupied outdoors and amazed that some of their neighbours could take an opposing view and report them.

Police arrived at Mountain View playground in Mount Eliza last week and asked children playing on the jumps for their names, addresses and schools after a neighbour reported them. The police then kicked down their dirt jumps.

The pros and cons of constructions in the informal playgrounds are being hotly debated on social media and have been turned into an issue of this month’s Mornington Peninsula Shire Council elections.

Briars Ward candidate Julia McCarthy, whose kids play on the jumps, said she saw a neighbour of the park on Mountain View Road “swearing at kids as she was frustrated at the dirt bike ramps they were building”.

“I was astonished anyone could feel this way as it has brought me such joy seeing the kids being kids at the parks – one of the silver linings of COVID.

“Let’s support these kids to get some sanctioned areas or facilities they can use, and also some breathing space while so much is still shut down for them. This physical and creative activity is awesome, not harmful.”

Ms McCarthy, one of 15 candidates contesting Briars Ward, is coordinating a petition to the council calling for more bike and BMX facilities for kids.

She said that with parental supervision “things like choosing inappropriate areas – close to trees, harming plants, in pathways – and using bad language or being anti-social – the path from teenager to be an adult can be tough – could be kept to a minimum”.

Other Mount Eliza residents Melissa Hay, Lauren Hall and Melissa Goffin (a candidate in Red Hill Ward) said they were amazed their children’s fun and games could become a contentious issue.

“Truly sad today to witness intolerance,” Ms Hay said. “What has this world come to?”

Ms Goffin said she had “communicated our frustration, positive benefits and sadness on behalf of kids and community” to the shire. “Apparently [the council officers] were acting in response to multiple complaints and public attention. I let them know that they’d likely rebuild.”

Ms Hall asked: “What has happened to our society? Where has the hearts in people gone? Council have just flattened all the bike jumps at the park with bobcats and five council workers…

“Those jumps have saved the mental health of so many kids and parents. Many friendships have been made through kids playing together… Let’s turn this around, people. Let’s bring back what makes happy memories for our kids. It’s up to us.”

Stevie Habib said the shire “should make a proper bike track there for the smaller kids and use the space in a good way”.

The other side of the argument was put by the shire’s interim director place Jessica Wingad said: “We understand the energy, creativity and enjoyment of those involved with creating informal bike jumps and are currently investigating longer term options to respond to this need in a safe and collaborative way,” she said.

“The shire is also assessing the reserves and parks used without permission for the construction of these jumps. Informal bike jumps can pose an unacceptable risk to other park users and may damage bushland or public park areas and our policy is to remove them.” 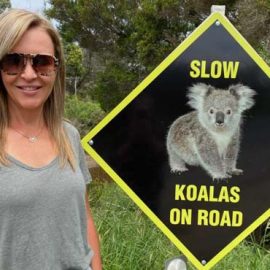