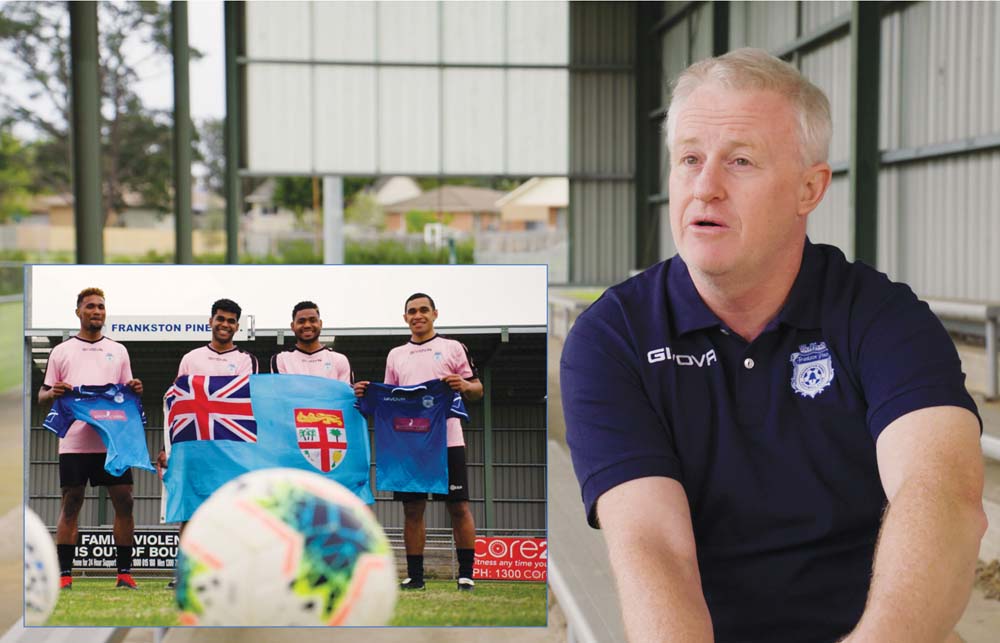 A TV show, a new home ground for 2021, community projects and hospital beds for Fiji … Frankston Pines has been a hive of activity recently.

Coonan’s company Side Netting had been contracted by Beyond Productions to work on a show commissioned by the Australian Broadcasting Corporation focussing on the lives of Pacific Islanders in Australia.

There’s no working title yet for the program which is likely to have two episodes air before Christmas with the Pines’ segment expected to be part of the first episode.

Kumar combines his administrative responsibilities at Pines with presidency of the Victorian Multicultural Sports Association, a Fijian community group which is now headquartered at Monterey Reserve after partnering with the local club late last year.

Kumar played a pivotal role in the signing of goalkeeper Aeseli Batikasa, defender Penni Tuigulagula, midfielder Savenaca Baledrokadroka and striker Tito Vodawaqa who arrived from Fiji in February this year.

They were set to spearhead Pines’ State 3 promotion push until the season was scrapped due to the coronavirus pandemic.

The quartet has been active during Melbourne’s lockdown by becoming involved in a series of community projects including shopping and gardening for locals in the Doveton area in which they live.

They also have been working with Connect Community Care Frankston, a Christian volunteer-based organisation that assists the local community and have helped deliver a large number of meals to needy and vulnerable people in the Frankston area.

The link with the Connect group came through the Play For Lives campaign spearheaded by former Socceroo and SBS football analyst Craig Foster, which aims to place professional athletes into the thousands of essential volunteer positions left vacant in the wake of the pandemic.

But it’s not just local community projects that Pines have been involved in.

Had anyone visited the Monterey Reserve clubrooms last week they would have found 40 hospital beds housed in the function area.

This joint project between the club and the VMSA saw these beds flown to Fiji later in the week.

The beds were donated by the Royal Victorian Eye and Ear Hospital and Arjo Australia and free transportation was made possible by Praveen Prasad of Capital Transport and Ron Sharma of Swift Transport Services.

Then came news the club has been trying to keep under wraps for weeks when Frankston council finally lifted the embargo on plans to relocate Pines to the newly upgraded Carrum Downs Recreation Reserve in Wedge Road for the 2021 season.

This move has been facilitated by the $3.9 million makeover of Monterey Reserve with demolition of the existing clubrooms due early next year.

It’s anticipated that building of the new clubrooms could start in February and feature flooring roughly 1.5 metres higher than present and a glass front to enable spectators to watch matches from inside.

It also will provide the club with an infrastructure base on which to develop its all-abilities and junior programs.

At Wedge Road Pines will play on a FIFA-approved synthetic pitch constructed by the Tuff Group.

The pitch consists of a combined synthetic turf product with sand and TPE infill on a preformed shock pad.

There are now over 3000 such pitches worldwide and they come with a claim of state-of-the-art performance.

“We could have stayed at Monterey but that would have meant operating out of portables and we didn’t want that,” senior coach Taylor said.

“I’ve spoken to council about the surface at Wedge Road and at the time I expressed some concerns about soft-tissue injuries that can come with artificial surfaces but I’ve been assured that council has seen to it that everything has been done in terms of shock absorption and things like that.

“From what I’ve been told it looks like we’ll also have access to the grass surface there and be able to do recovery sessions on the grass if need be so I’m happy with that.”

Taylor has firsthand knowledge of synthetic surfaces having guided Bentleigh Greens’ under-20s to a championship during his time with the NPL giant.

He thinks that the pitch could be advantageous to his squad.

“It should allow us to continue with a possession-based style and I think there will only be us and Monash playing on an artificial surface which could give us an advantage I guess.

“If you are not used to it then it can be a bit tricky at first.

“We might continue to play home games at night and it can be a little bit slicker with the dew you get as the night closes in.

“Yeah it can affect the bounce a little bit.

“My biggest thing with artificial surfaces is when you are playing in the heat of the day because they retain the heat like nobody’s business.”

It also looms as the facility that will host a very important visitor should the clubrooms at Monterey Reserve not be available.

Kumar also met with the Fijian PM in September 2019 on his first official visit to Australia.

“When he comes to Australia and when these restrictions here are eased he’ll be coming to the Pines 100 per cent,” Kumar said.