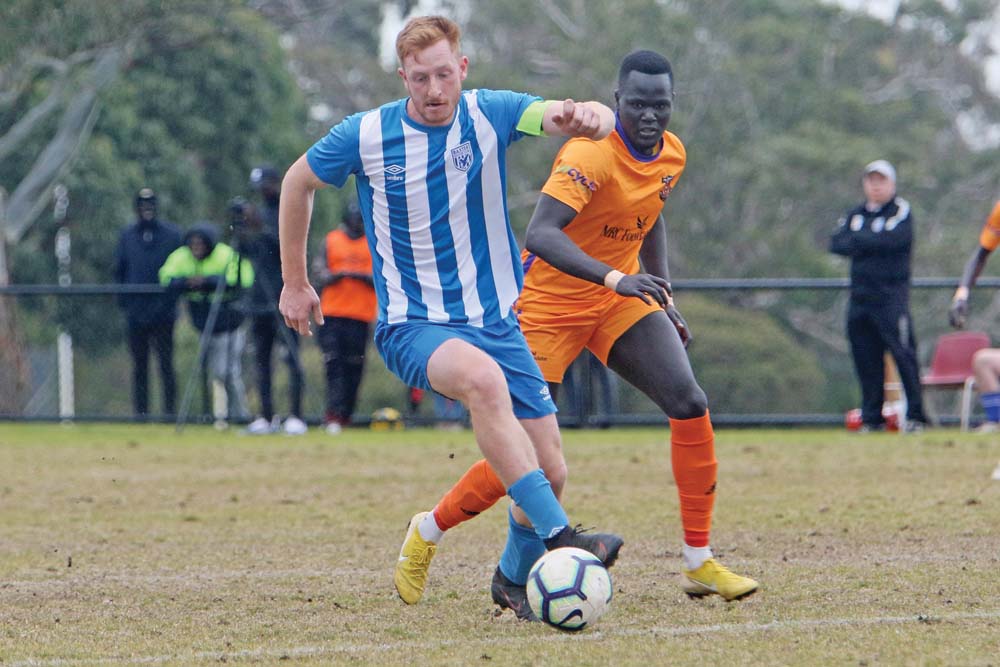 WHEN it comes to long-range forecasts Baxter captain Izaak Barr doesn’t hold back.

The 22-year-old and his teammates have set their sights on winning the State 4 South championship next year.

“I was absolutely devastated when we couldn’t play football this year because (with) the team that we had I reckon we could have won the league,” Barr said.

“We put some absolute quality into the team with guys coming back from 2019 and a couple of Mornington senior players coming down in Charlie O’Connell and Charlie Parker as well as Robbie O’Toole in centre mid.

“And Ben Meiklem came back plus Owen Kilner.”

Barr is one of the youngest captains in local senior ranks and has played the game since childhood.

Born in the New Zealand capital Wellington he arrived in Melbourne as a 10-year-old and joined Mornington at under-12 level.

Darren Collins and Marc Slack were the two main influences during his progress through junior ranks at Dallas Brooks Park.

“I was with Darren and ‘Slacky’ through most of the juniors. Started off as a striker but ‘Slacky’ put me back to centre back.

“They’re just winners these guys. They get the best from you and make you want to play for them.”

Another winner at Mornington was former Glasgow Rangers striker Craig Lewis who was coaching the reserves.

Lewis gave Barr his first call-up to that level and the squad was primarily made up of Mornington juniors.

When Lewis took over at Peninsula Strikers for the 2015 season he enticed the youngster to follow.

“That first year at Strikers I was pretty much a reserves player. I got a few call-ups (to the senior squad) then in my second year I played a lot in the ones at right back or centre back then in my third year we had a really good team with Raph, Danny and Leo.”

But Barr suffered his first serious injury in 2017 when he damaged his hamstring tendon and he struggled to recover from the setback.

“Every time I came back I’d redo it so I didn’t play much that year.”

When season 2018 arrived Barr had switched to Baxter, a choice made easier by his friendship with players there.

“Benny Meiklem and a few other mates were there and they got me down to training.

“I just rocked up and they were the best bunch of lads.

“I got my first carpentry job there through Liam (Kilner) so when you think about it I wouldn’t be a carpenter now if I hadn’t joined Baxter plus I wouldn’t have all these mates if I hadn’t gone there.”

That’s Barr’s way of saying that the connections he made at Baxter Park are special and you sense that the need to repay the club motivates him to succeed next season.

This would have been his third year there and it’s been a rollercoaster ride.

In 2018 Baxter went within a point of being relegated and a mass player exodus during the following pre-season brought the club to its knees.

“Yeah last year we had a shocker at the start but we got a few players back and won a few games and ended up finishing off the season well.”

Being senior captain doesn’t weigh heavily on Barr’s shoulders in fact he thrives on the responsibility.

“It means a lot to me to be captain at a club like Baxter.

“George (Hughes) isn’t just a great coach but he’s also a great person off the park and we can always talk about team things.

“Robbie (Mathieson) is the same and the banter between them and the players is always good.”

Despite feeling that 2020 has been an opportunity lost Barr recognises that the enforced break can benefit the senior squad by allowing powerhouse central defender Matt McDermott to fully recover from a broken fibula and help Nathan Yole to deal with a lingering back injury.

“If everyone sticks together – and I’m pretty confident that they will – then I’m certain we’ll do well next year.

“It’s just a matter of picking up from our last training session.

“We have the depth and the quality and looking back at State 4 last year I think football-wise we can be a class above everyone else in the league.”

Barr’s next training session with his teammates looks likely to be later this month after recent easing of pandemic restrictions by the state government.

Sport and Recreation Victoria is expected to release detailed guidelines for community sport this week and FV will then update its return to play conditions.

It’s expected that Frankston council and Mornington Peninsula Shire council will allow clubs to access their facilities in line with FV’s timeline.

In NPL2 news Langwarrin announced last week that goalkeeper Fraser Maclaren had returned to the club for a second stint.

Young keeper James Burgess who joined Langy from Springvale White Eagles this year is believed to be on South Melbourne’s radar.

Mark Cassar has stepped down from his technical director’s role at Lawton Park and his replacement is club legend Gus Macleod.

The big man will combine his junior NPL TD role with his community juniors’ TD role.

Peninsula Strikers and Mornington are the other local junior boys’ NPL licence holders.

Strikers have retained this year’s coaching staff for the 2021 season so Jonathan Magee is technical director, Danny Topping is under-14s coach, Graeme Ferguson is in charge of the under-15s, Darren Hili has the under-16s and Christian Castro is under-17s coach.

Mornington is expected to announce its appointments shortly.