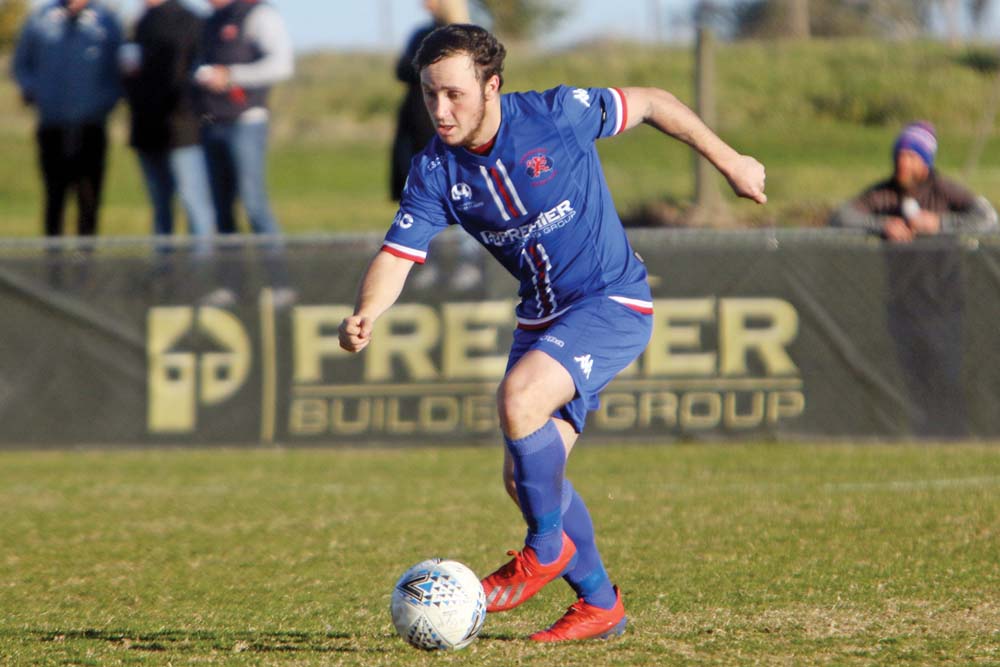 Peter Madafferi was president of Carrum United, the forerunner of Skye United.

He left behind Jaiden, older brother Anthony and their mother Karyn.

“It was hard because my brother and I were both young,” said Jaiden Madafferi.

“Mum has brought us up to where we are now and done it all herself.

“All credit to her – she has been phenomenal.”

Jaiden had started playing as a junior at Carrum United but when he was 11 he switched to Peninsula Strikers.

Two years later the entire team switched to South Melbourne at under-14 level for a further two seasons then to Richmond for a season and finally to Bentleigh Greens.

At Bentleigh Madafferi made the switch from an attacking midfielder to left back.

It was 2014 and the then 15-year-old was captaining the club’s under-16s as his reputation as a gifted junior continued to grow.

But life for the Madafferi family took another traumatic twist on 23 August that year.

Jaiden was at a party when he became the victim of an unprovoked, one-punch attack.

He had to be placed in an induced coma and his mother and brother were told to expect the worst.

“At first my mother was told that I might not make it,” Madafferi said.

“Then it went to not being able to walk then it became I wouldn’t play soccer again but in the end I ticked all the boxes.

“I had very good support and had people with me every day and having people there wanting you to get better was a big thing.

“It helps your mind a lot.

“On the physical side of things I was told my fitness played a big part in my recovery and if I hadn’t been so fit then how I ended up could have been a whole different story.”

Madafferi spent eight weeks in The Royal Children’s Hospital and eight months away from the sport he loved but on Friday 24 April 2015 a remarkable comeback was complete.

He was in the Bentleigh under-20s now coached by current Frankston Pines gaffer Kevin “Squizzy” Taylor.

“I came off the bench for Bentleigh against Port Melbourne for about 15 minutes,” he said in a matter-of-fact manner.

For Taylor that moment was a career highlight.

“Without a doubt that was one of my biggest thrills in football telling Jaiden to get ready because he was going to go on,” Taylor said.

Madafferi has much to thank Taylor for.

“He was phenomenal for me.

“Obviously he gave me my first game back but it was the way he stood by me, had faith in me and being made captain under him was an honour.

“He played a big role in me getting back my confidence on the field.”

Madafferi and his teammates won the under-20 title that year but the following season the youngster was wearing Melbourne City colours and starting a two-year stint with the A-League outfit.

At City Madafferi played in the national youth league and the NPL and was coached by Joe Palatsides, Lachlan Armstrong and Patrick Kisnorbo.

“They taught me things I didn’t know before, just very minor technical details and they were very professional.

“The intensity at training is second to none and so is the workrate they demand.”

Madafferi was on the move once more when the 2018 season dawned having joined Northcote along with many of his City teammates.

“I sort of wanted to step away from the youths a bit and to challenge myself.

“I think there were about eight of us who went across to Northcote.”

Partway through that season Langwarrin contacted him but he wasn’t keen to move straight away.

“I was a young player in my first season at Northcote and I didn’t want to get a name for jumping around (clubs) so I said I’d talk to them at the end of the season.”

Madafferi joined the Langy senior squad in November 2018 as part of a developing group under new head coach Scott Miller.

A fourth-placed finish in NPL2 in Madafferi’s first season at Lawton Park secured the club’s league status for the season that never was in 2020.

However that 2019 season was important for the squad’s development and Madafferi hopes that we’ll see the benefits next year.

He’s also keen for what should be a break with tradition as Langwarrin switches to playing home games at night.

The club is the benefactor of a $500,000 floodlighting project jointly funded by the state government and council and due for completion by April next year.

“I’m really looking forward to being able to play under lights on a Saturday night with all the peninsula down there.

“Just think about it – Saturday night with a good crowd.

“It couldn’t get much better.”

Aside that is from taking the club to the highest level in Victorian soccer and Madafferi sees that as a distinct possibility.

“I think we are capable of going up one more step,” he said.

“Playing under Scott is very much like playing under the Melbourne City coaches because he’s very professional in the way he goes about things and what he demands from the players.

“We’ve got a good squad and we’ve got a lot of good younger players.

“That’s the other thing about Scott – he’s got faith in younger players.

“I think we’ve gelled a lot more now and hopefully we can come back after this break and take it from there.”