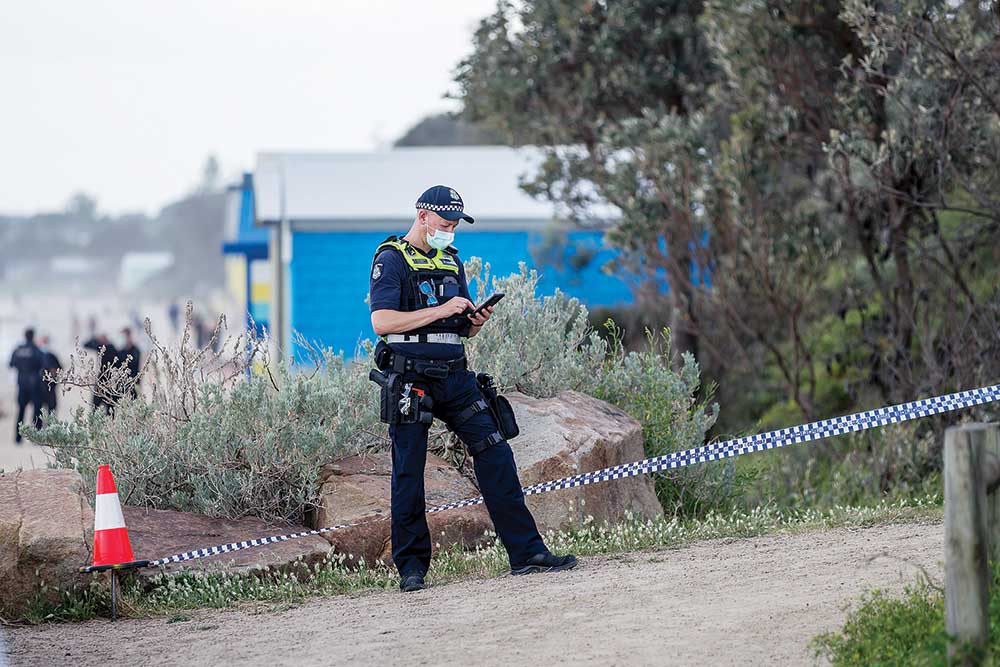 BOMB Squad sniffer dogs were deployed to Dromana beach after explosives were found in the sand beside a beach box on Sunday (15 November).

As they worked, the Canine Unit, Arson and Explosives Unit, Rosebud police and Air Wing cordoned off the beach box and searched the sand before declaring the area safe about 3pm.

Detective Senior Constable Tim Jamieson, of Somerville CIU, said the beach box’s owner had been digging away sand before repainting when he unearthed a length of PVC pipe about 50cm deep. Unscrewing one end he discovered what he thought to be electronic detonators wrapped in newspapers dated 1987.

He took the explosives to Rosebud police station where they were assessed by the bomb squad and later taken away to be made safe.

The detonators are used to set off explosives.

The beach box owner, who has had the box for 13 years, initially thought the pipe was a time capsule and tapped the top with a hammer to unscrew it.

The man, an engineer, told police he saw wiring inside attached to three jars and recognised the items they contained as detonators.

Rosebud police quickly cordoned off the beach box to keep beachgoers away.

Detective Jamieson said an ongoing investigation would seek to determine the pipe’s owner and how long the detonators had been beside the beach box.

“The pipe had been well concealed and there was no sign of deterioration.”

Detective Jamieson said members of the public were “never in any danger” from the concealed detonators, although he agreed it was “probably not a good idea” to tap the pipe with a hammer to open it.

“These things on their own are relatively safe; they are designed to be hooked up to a power source,” he said.