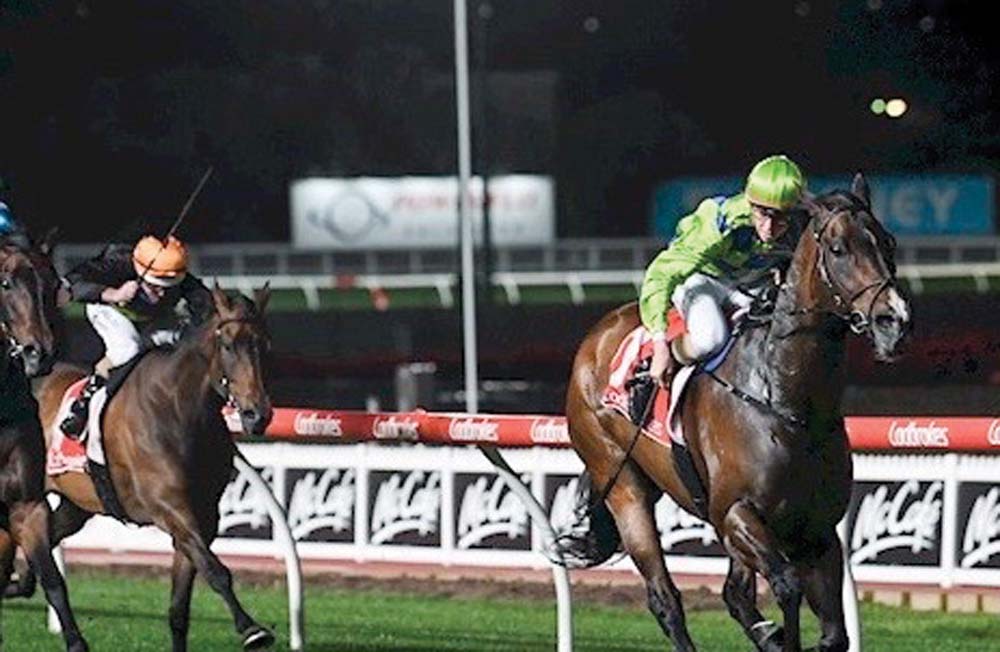 JEROME Hunter’s talented sprinter Our Luca has broken his two-year winless drought with a commanding victory at The Valley on Friday 13 November.

The Graebar Park-owned gelding had been winless since he clocked up three straight victories at The Valley at the end of 2018, but finally returned to somewhere near his best in the 1200m contest under the hands of Mornington-based apprentice jockey Campbell Rawiller.

Bringing up a winning double on the night for Rawiller, Our Luca ran his rivals off their legs by setting up a strong tempo up front before gaining a winning break turning for home. The seven-year-old gelding, who now has eight wins to his name, held on to win by one-and-a-half lengths over the Maher and Eustace-trained Cataracta.

Mornington-based trainer Jerome Hunter was thrilled to see Our Luca return to the winner’s stall after two years.

“He’s back,” Hunter exclaimed post-race. “Like I said it’s just more that he’s got to be happy with the going and the last couple of years he’s had some terrible tracks to run on and everything fell into place tonight.

“I said to Campbell when he did win here before, he used to get a bit of a gap on them and I said just go a bit earlier. If he’s back to his best, he’d definitely beat this field.”

Rawiller, who also rode the Tom Hughes-trained The Commoner to victory earlier on the card, said he always felt comfortable with the way Our Luca was travelling despite setting a strong tempo throughout.

“We got a little bit of pressure early but the horse did it itself today. He got in well with the claim and it’s great to get a winner for the team,” he said post-race. “Breathing wise it suited (the tempo) and I knew I was in a comfortable rhythm. They were getting along for sure but it wasn’t affecting the horse going that little bit quicker so I was happy to do it. It’s a big thrill [to ride a winning double] and thank you to everyone that’s backing me.”

The victory also brought up Rawiller’s second consecutive ‘Ride of the Night’ honours at The Valley.

Rawiller picks up a couple of Drummond Golf vouchers with the success and is hoping the new golf gear can help him find improvement on the course.

“I do like golf but I’m not good at it,” he joked. “I reckon I’ll get some nice clubs now and hopefully they improve me.”