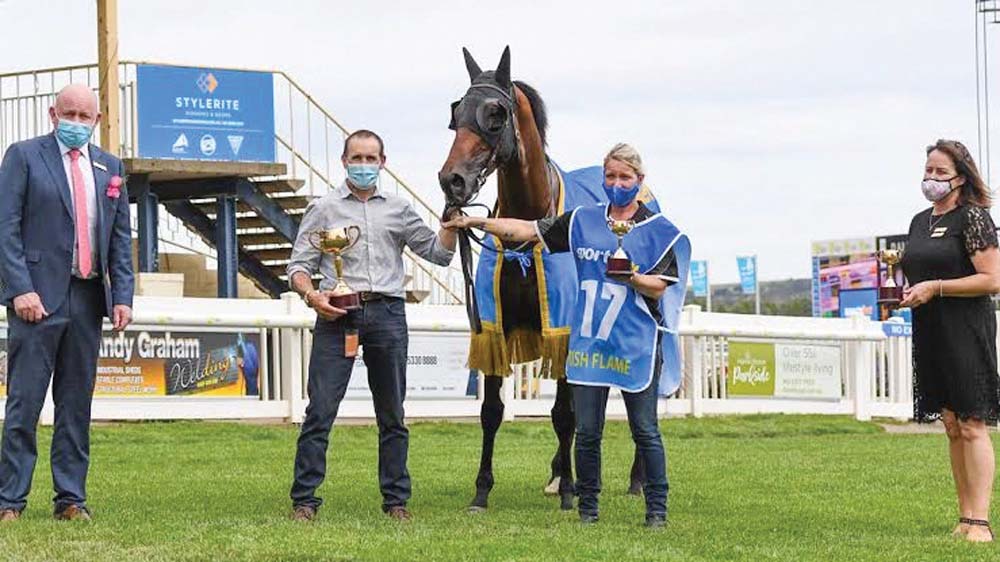 THE New Zealander’s Brett Scott and Michael Walker have combined to take out the $500,000 Listed Ballarat Cup with the inform stayer Irish Flame on Saturday 21 November.

Notching up a hattrick of wins in his first prep with Mornington-based trainer Brett Scott, Irish Flame was forced to sit wide for the entirety of the 2000m trip but still proved too tough for his rivals to land a narrow neck victory over the Dan O’Sullivan-trained and race favourite, Affair To Remember.

Irish Flame, who had won races at Flemington and Moonee Valley at his past two starts with Scott, was previously trained in New Zealand by legendary racehorse trainer John Wheeler. Wheeler and Scott have combined plenty of times in the past to win many of Australia’s best jumps races, with Scott also being a champion jumps jockey prior to taking out his trainer’s licence.

Scott was thrilled to see the six-year-old gelding, who is affectionately known as Patrick at the stables, tough it out to win the feature race on Saturday and continue his exceptional form since arriving in Melbourne.

“It was a good solid tempo but he didn’t get any favours in the run. He was three-deep without cover for pretty much the whole trip,” Scott said post-race.

“He came off the bridle just before the corner and I thought we might be in a bit of trouble but he hung tough. John Wheeler had him in New Zealand as a yearling. He was a handy horse. He was in the Derby but wasn’t good enough already. Since he’s been in Melbourne, every race has been good. He’s improved with every run and he’s a good, tough stayer.”

Jockey Michael Walker couldn’t have been happier to ride the feature race winner for Scott who has been a huge influence on his riding career.

“Brett Scott actually taught me how to ride. He was the foreman at the stable that I very first went to. The owners, all the people in Hawera, I need to thank them for the opportunity to stay on a remarkable horse,” Walker said post-race.

“To Scotty and [his wife] Kylie and the whole team at Mornington, they do a tremendous job. Scotty has been a rider himself, albeit over the jumps, he’s a champion rider. I’ve got no doubt he’s going to make a champion trainer, too.

“I had a wide run but Kylie and Brett Scott have done a tremendous job having that horse fit today. A couple of times I rode him, it’s been taking us a while to get the hang of him. He got the front today and he was going to win by three (lengths) but he pulls up when he hits the front, but I was lucky that they got to me a long way before the post. He kicked again.”

Since kicking off his prep in August, Irish Flame, a six-year-old son of Zed, has missed a placing just once from his eight starts with Scott. With Saturday’s victory, he has now earnt over $685,000 in prize money for his connections.