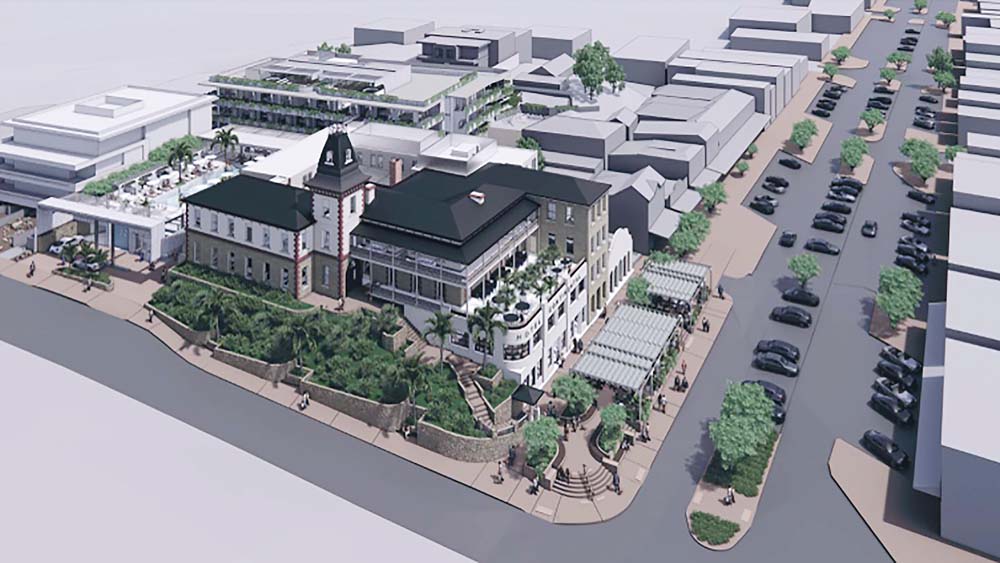 THE Nepean Ratepayers Association is up in arms over an application by the developers of the Hotel Continental to build a 120 seat “outdoor dining room” on the front footpath.

Ratepayers’ president Colin Watson described the bid for the 225 square metre Sorrento site as a “blatant land grab which only benefits the developer.”

The Hotel Continental Development Consortium wants Mornington Peninsula Shire to approve the room and allow it to remove seven car parking spaces from the street outside the 1876 limestone icon on Ocean Beach Road.

Mr Watson says pedestrians would be diverted onto an alternative footpath rather than having them walk through “the middle” of the outdoor room.

“A 120 seat dining room will create considerable foot traffic … across the existing footpath with diners and waiters entering and exiting the hotel building,” he said.

“The developer is using public land for its own financial benefit. While [it] will pay a licence fee for the use of land it in no way compensates for the full commercial value [with] fixed planter boxes, pergola and permanent roof.

“This is the ‘thin edge of the wedge’ in that if the application is granted it will create a precedent and every restaurant in Ocean Beach Road will be able to build a permanent outdoor dining room on the footpath.”

Trenerry Property Group director Robert Dicintio said: “Having already been approved and endorsed by Heritage Victoria, the proposed outdoor dining area, which is contained within a semi-permanent pavilion structure, will not affect pedestrian flow around the area.

“The addition of two new footpaths either side of the dining zone will actually improve pedestrian circulation and provide more space for pedestrians than is currently available.

“The Ocean Beach Road car parks … will … sit alongside the other public car spaces below the proposed porte cochere, so there will be no net loss of … spaces available 24/7, free of charge.”

The Nepean Ratepayers Association also wants the developers to reduce the height of the rear hotel rooms so they don’t overshadow the tower parapet.

While agreeing the committee is “generally delighted that the hotel will be refurbished and returned to its former glory” Mr Watson confirmed the roof height was a sticking point.

“It will be higher than the roof line of the apartments at 21 Constitution Hill Road,” he said. “Our preference would be for one floor from this four-storey building to be removed.”

The hotel group rejects this, saying the top of the tower parapet is five metres higher than the roofline of the hotel rooms at the rear. It said hourly shadow diagrams, from 9am-3pm, at the equinox, assessed that there would be “no overshadowing of the heritage building as a result of the proposed amendments to the roof of Building B”.

Mornington Peninsula Shire Council is expected to discuss the controversial application this week.

Works at the Conti include protection of the heritage buildings and restoration of the historic Grand Ballroom which has been approved by Heritage Victoria; luxury 5-star hotel, multiple function spaces, public bar, food and beverage choices, glass-ceiling conservatory and wellness centre; European-style alfresco dining piazza.

The developer says “approval of the planning application this month means we can deliver on this vision and re-open this iconic venue in late 2021”.

“Without this support, these works cannot progress, and construction of the Hotel Continental will be once again delayed significantly – adding months, perhaps years to the re-opening timeline.”