Grandmothers march in time for refugees 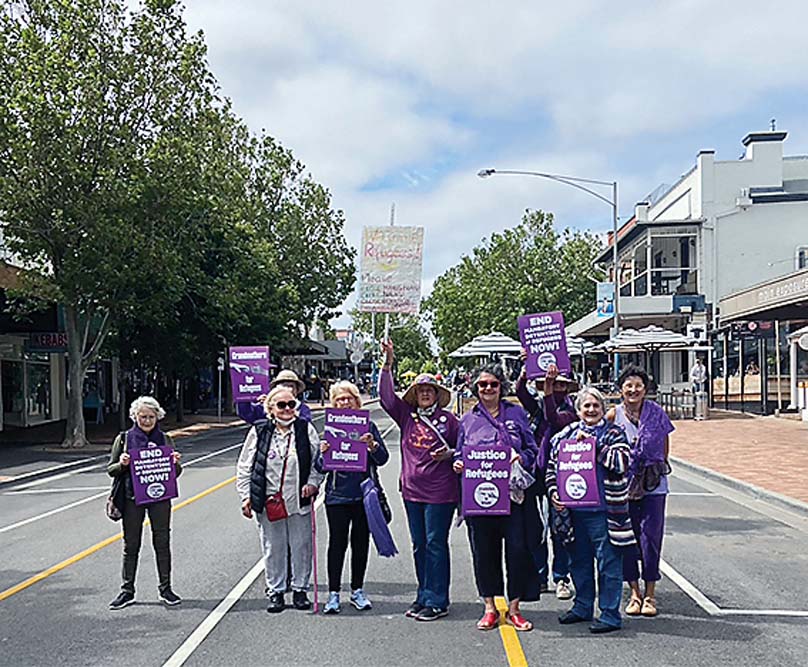 GRANDMOTHERS were out in force in Mornington on Human Rights Day to bring attention to the plight of refugees being held in detention by the federal government.

Grandmothers for Refugees and Friends of Grandmothers walked along Main Street on Wednesday 9 December in support of the Time for a Home Campaign aimed at freeing refugees held in Australia and overseas.

“After seven long years of cruel politics it is time the government frees these men, women and children and quickly resettles them into our community, so they can be safe and have a place to call home,” Ann Renkin, of Shoreham, said.

Last Thursday, about 60 refugees and asylum seekers held in a hotel at Preston for more than one year were taken by bus to another hotel in central Melbourne. Protesters clashed with police as the transfer took place.

The men had been at the hotel since being brought to Melbourne from Manus Island for medical treatment. The government has since repealed the medevac legislation which allowed them to be landed in Australia for treatment.

Ms Renkin said grandmothers in the Mornington march were also “very concerned about the ongoing imprisonment of the Murugappan family on Christmas Island”.

“Priya and Nades are the parents and their two children are Kopika and Tharunicaa, who at three years old, has spent most of her short life behind bars,” she said.

“Not only is their continuing imprisonment costing Australian taxpayers millions of dollars, but there is also a community in Biloela who would welcome the family back to continue to work and contribute as citizens to the community in the same way they did prior to their imprisonment.

“We believe most Australians are concerned that this family who fled here to find safety are now facing their third Christmas while imprisoned.”

The Southern Peninsula Grandmothers for Refugees is one of many grandmothers’ groups advocating for justice for refugees. It was established in 2011 to advocate for the removal of children from detention.

Ms Renkin said the grandmothers want Flinders MP Greg Hunt to “advocate with his government to release the refugees  into the community, particularly because, as the Minister for Health, he must be very aware of the damaging impacts on physical and mental health of long term imprisonment in detention”.

She said Home Affairs Minister Peter Dutton and Immigration Minister Alan Tudge had the power to approve the release of the family on Christmas Island and the men held in Melbourne on humanitarian grounds.

“Or they could take up the New Zealand offer and allow them to settle in New Zealand,” Ms Renkin said.

“This would mean that, rather than costing us millions of dollars each year for their imprisonment, and further damage to refugees, they could contribute to their own economic wellbeing.”

Ms Renkin said the requests by Grandmothers for Refugees were in line with the International Convention relating to the Status of Refugees “which gives everyone the right to seek asylum in another country”.

Mr Hunt told The News he “deeply respected the views” of the grandmothers, adding that “Australia remains committed to protecting its borders, stamping out criminal people smuggling and preventing deaths at sea”.

“The government’s policy is clear, no one who attempts illegal maritime travel to Australia will be permanently settled here,” Mr Hunt said.

“We are providing medical treatment in Australia which will assist these individuals in their resettlement pathway to the United States, return to Nauru or PNG, or for those who are not refugees, return to their home country.”

Mr Hunt, who is the health minister, said refugees who were on the final departure bridging visa would have work rights and access to Medicare.

“Australia remains the third most generous country in the world from a humanitarian intake perspective, and that’s on an absolute figures perspective, behind the United States and Canada,” Mr Hunt said.

“The provision of mental health services is an important part of the Commonwealth response.”