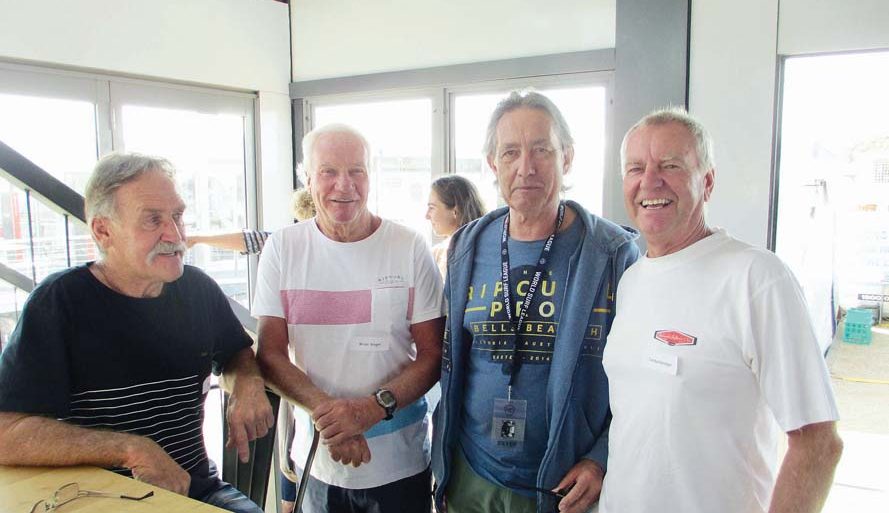 A GOOD a reporter is one who can, metaphorically, be parachuted into any situation and come away with a good yarn.

Tim Baker fits that category and, since making his way as a newspaper reporter, has been able to utilise his skills writing articles and books that allow him to follow a lifestyle that revolves around his passion, surfing.

With his latest venture, The Rip Curl Story, Baker demonstrates his reportage skills, but also adopts a narrative that is both entertaining and factual. He knows his subject.

The book is basically a biography of the two founders of what has turned into the international Rip Curl empire. In following the lives of Doug “Claw” Warbrick and Brian “Sing Ding” Singer, Baker’s book provides an insight into the emergence of an international industry, a word that few outside of the tent in the 1950s or early 1960s would have applied to surfing.

Surfing was seen as a corruptive influence, an outlaw existence that threatened the accepted order of business and life.

Its emergence among the younger generation as a force (sometimes for good) arrived at the same time as the social change sweeping the western world on the back of rock ’n’ roll, America’s “invasion” by British bands, hippies and the relative wealth and freedom following two disastrous world wars (Vietnam came later).

Warbrick and Singer were keen to ride this new wave idea of putting lifestyle first, although the necessities of life saw them forced to sometimes take menial jobs to survive. Singer virtually fell into teaching because he knew mathematics and Warbrick came up with the idea of summer pop-up surf shops.

They were quick to see the changes being made to surfboard designs (led by Sydney-based shapers) and became agents for several brands, before adopting Rip Curl as a name and brand.

The growth of the company is closely tied to the evolution of, firstly, surfboards and not long after, wetsuits.

Both products were required for surfing in Victoria and Torquay, the eventual home of Rip Curl, became synonymous with the lifestyle that grew into a sport.

Warbrick and Singer were so adept at recognising and adopting trends and styles that they would appear to be leaders in their field.

Quick to see the need to expand their manufacturing of surfboards and wetsuits they rented various properties as either offices or factories, adding to Torquay’s reputation as a base for surf-oriented cottage industries.

Al Green, a one-time Rip Curl partner and the impetus behind making wetsuits, eventually left and branched out into making board shorts and sheepskin products, creating yet another local brand that went international, Quiksilver.

The rise and rise of Rip Curl mirrors surfing itself. Surfers, once frowned upon, are now household names, professional sporting stars. The annual Easter Bells Beach surfing contest in 1973 offered prize money at the instigation of Rip Curl after Warbrick had been overseas and seen the way forward. It was Australia’s first professional surfing contest with overseas competitors. The sponsorship of the contest by Rip Curl remains a key element in the company’s success.

At first there was disdain for professionalism and growth of the surfing brands, but the cottage industries had outgrown themselves and were swept along for ride, as if by a tsunami.

The Rip Curl Story is more than a book about a surfing company and the two men behind its growth and success, it is a history of surfing, mainly in Australia, with a keen focus on its ties to a once-sleepy coastal Victorian town that is now part of a municipality called the Surf Coast. Times changed and the young men and women who just wanted to be near the surf became the economic backbone of the area.

It also presents an opportunity to join the dots on the names and companies (associated with Rip Curl) that have been essential to surfing attaining its status here and overseas.

As The Rip Curl Story shows, everything changes and nothing changes, especially when it comes to surfing. The company may have been bought for $350 million in 2019 by New Zealand “specialist outdoor retailer” Kathmandu, but waves are a great leveller.

You never know who you’re sitting next to in the line-up. It may be a sponsored surfer, a surf brand mogul or someone who just loves to feel the natural energy of a wave. Go for it.