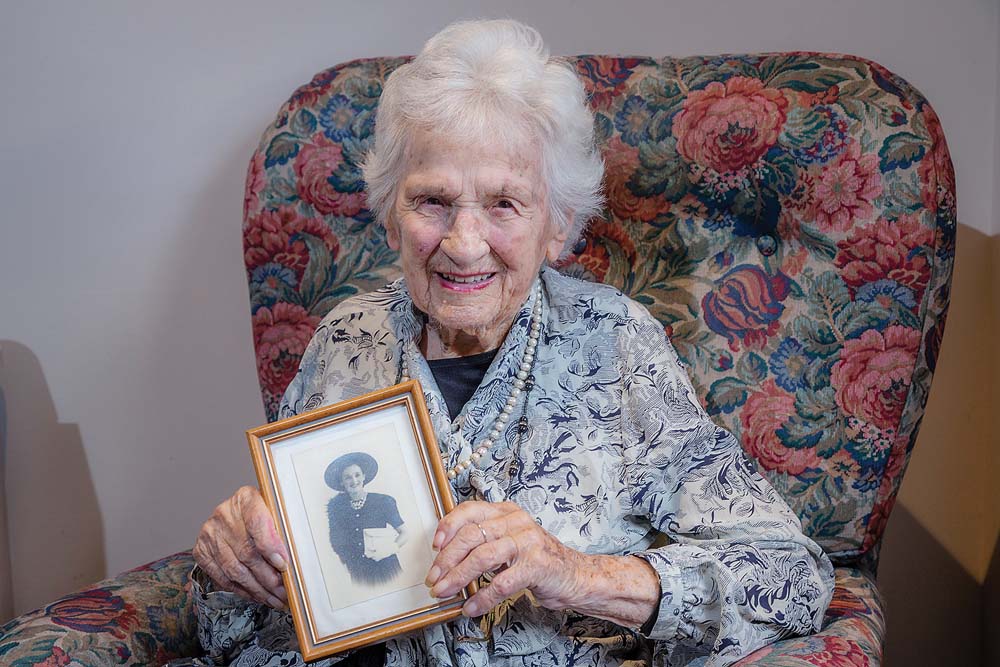 A WOMAN who has been a part of Melbourne’s growth and prosperity for more than 100 years celebrated her 108th birthday last week.

Marjorie Andrew, a resident at Benton’s Lodge, Mornington, was born at Moonee Ponds on 15 January 1913.

Speaking to The News last week she said: “I grew up in Mordialloc, attended Mordialloc Primary School and finished my Leaving Certificate at night school.

“My first job was as a clerk with the State Electricity Commission, first in Flinders Street and then Cheltenham.”

After marrying Cyril “Bruce” Andrew at Mordialloc’s St Nicholas Church in May 1939, Ms Andrew faced the prospect of losing her husband when WWII broke out just four months later.

“He was away for five long years and the world changed in the meantime,” she said.

Looking back on those chilling times, Ms Andrew said part of the war effort for women who stayed at home was to work in the munitions factories, drive ambulances and staff cars, learn field nursing and first-aid, and to fill other positions traditionally held by men.

“So, I learnt to drive, got my licence and drove management around, as well as defence force officers,” she said. “I joined the Red Cross and was a volunteer for 70 years.

“In those days it was very much frowned upon for a woman to be behind the wheel of a car, so it is not surprising that when Bruce came home he was quite upset and forbade me to drive – until one night when he needed my driving skills, and the rest is history.”

The couple had a daughter, Francine, who in turn had one son, and Ms Andrew says she is “blessed with two great grandchildren to date”.

The late Mr Andrew was a Collingwood footballer who turned to commentating on radio and television. Ms Andrew admits to being a “great CFC supporter” as well as a “sociable person”.

“I like to try new things and, even though I am getting on in years, if the body and mind allows, I will continue participating,” she said. “I can still get on the bus to go out for lunch with fellow residents, and enjoy a variety of activities, such as music, trivia, Happy Hour and 10-pin bowling.”