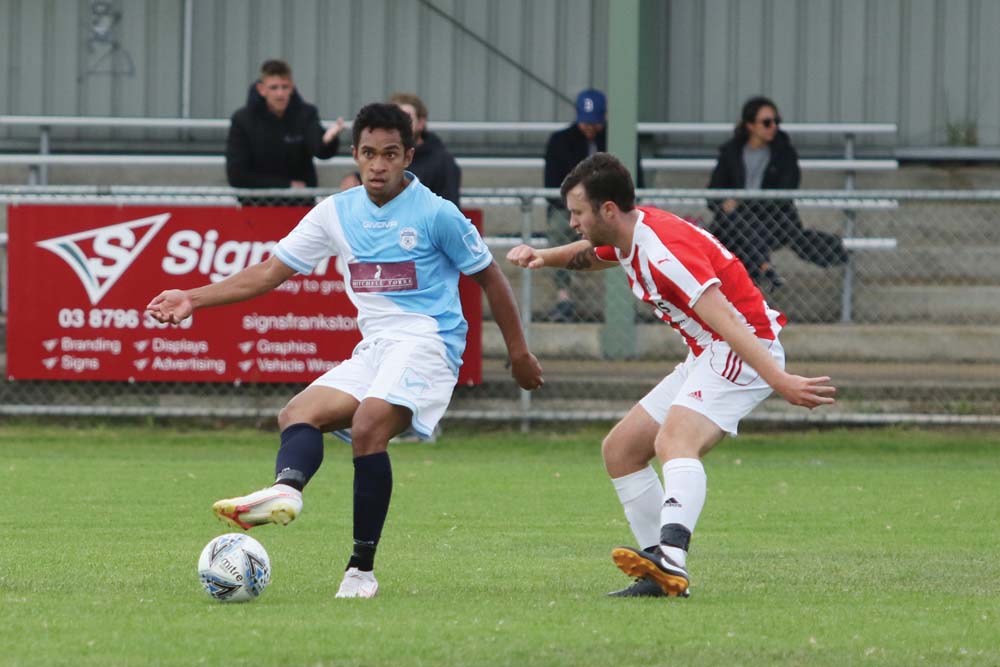 FRANKSTON Pines’ 2021 campaign got back on track with a 4-3 win over Berwick City in their friendly at Monterey Reserve last weekend.

The local side had suffered a hiccup back in December when losing to Doveton’s NPL under-21s 3-1.

There’s been a fair bit of hype around this Pines’ side and its State 3 title credentials not least because of its four young Fijian internationals so it needed a much more positive display to justify the noise.

And it got one here as Pines were in control for long periods against a disappointing State 2 opponent.

Pines ran up a 4-1 lead before conceding two sloppy goals in the second half.

Pines hit the front early after Avraham’s corner from the left was not properly cleared allowing him a second chance and his far post cross was volleyed home on the bounce from 10 metres by Baledrokadroka.

CJ Hodgson had blown a couple of scoring opportunities before conjuring up an outstanding curling strike into the far corner in the 22nd minute for Pines’ second.

Webster handled inside the area a few minutes later and former Pines captain Paul McEvoy had no trouble converting from the spot to make it 2-1.

Shortly before the interval Hodgson got his second.

Not for the first time Vodawaqa taunted and teased the Berwick defence down the left and his cutback was met superbly by Hodgson whose low left-foot strike made it 3-1.

A minute into the second half Avraham gave Pines a three-goal cushion with a curling free-kick from the left that eluded a pack of players in the box and the Berwick keeper, anchored to his line, could only watch it bounce inside the far post.

John Prescott made it 4-2 with a close-range header in the 60th minute and five minutes later a McEvoy free-kick curled towards the back post was headed towards the opposite post by Berwick’s Jarod Blackbourn.

Fijian goalkeeper Aeseli Batikasa made a poor attempt at grabbing the ball which eluded his grasp and dropped in behind him to complete the scoreline.

The club had made a pre-match announcement that Paulo Pinheiro had stepped up from his role as reserves coach to become senior assistant to Kevin “Squizzy” Taylor replacing Darren Roberts who resigned recently.

Hayden Taylor was then appointed playing reserves coach with Jamie O’Halloran as his assistant.

That duo kicked off their coaching careers in style with a 3-1 win on the back of two Hayden Taylor goals and a Lachie McMinimee penalty.

Taylor went to great lengths after the match to ask that a vivid description of one of his goals be published even offering up a video of the moment.

“It was an absolute wonder goal,” he boasted.

“I chipped the keeper from near the halfway line.

“A bit like that Kemar Roofe goal for Rangers in the Europa League.”

Doree opened his account from the spot after 25 minutes but a few minutes later the visitors returned the favour when referee Frank Osei-Ntim awarded them a penalty.

The former East Bentleigh striker’s first touch wasn’t great but he got to the ball before the advancing keeper and knocked it past him from close range.

It was 2-1 at half-time and early in the second half Anderton opened his account after a good build-up down the left sent him clear and he slotted it in with ease.

His second came with a deft touch at the near post and that was that.

Overall it was a worthwhile hitout for both sides with the promise of better to come.

As for the visitors their biggest news was that the trial separation is over and the dynamic coaching duo of Billy Armour and Billy Rae has been reunited for the umpteenth time.

There had been speculation that Rae would be considered for the vacant Somerville senior coaching post but the local club did not contact him.

Strikers too had made a significant coaching appointment and late last week they announced that Jake Priest had taken over as reserve coach for 2021.

This post was vacated by Donn Delaney who became senior assistant to Williams after Scott Morrison’s departure.

Priest has significant experience having coached Torquay United community teams in the UK and holds an FA Level 2 licence. Since coming to Australia he has coached Casey Comets under-20s, Old Scotch reserves and South Yarra reserves.

In NPL2 news Langwarrin’s planned away friendly against Eastern Lions has been switched to Lawton Park.

The match will now take place on Sunday 31 January and will feature an under-19s clash at noon followed by the seniors at 2pm.

An under-21s match will kick-off at 4pm.