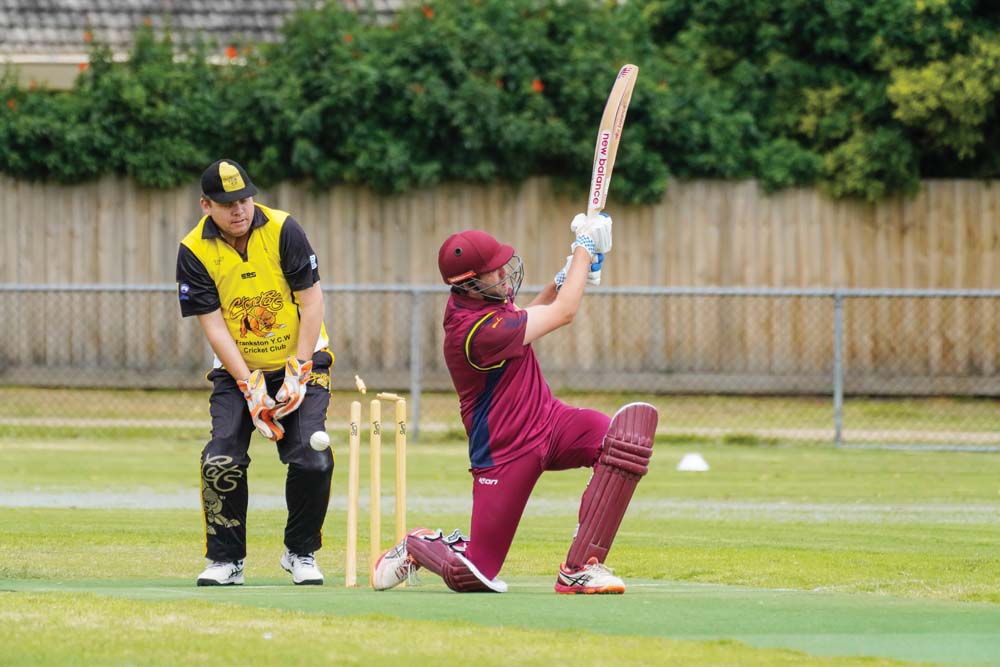 SEAFORD Tigers have fallen agonisingly short of victory against Pines.

Damien Lawrence was brilliant for Pines. He scored 99 not out as an opening batsman, bringing his team to a total of 4/178. The knock was his best of the season.

Seaford Tigers’ run chase got off to a good start, with Brayden Roscoe and Tim Hayes combining for a 75 run opening stand. From there the side fell to 4/88, putting the result in doubt.

The Tigers middle order wasn’t able to capitalise on a strong start. They brought the game down to the final over, but couldn’t get over the line.

The Tigers finished all out for 174 from 40 overs, five runs from victory.

Lawrence also impressed with the ball, taking three late wickets to help his side wrap up the win.

At Bruce Park, a brilliant ton from Tom Boxell got Long Island a win over Heatherhill.

Batting first, Heatherhill set their opponents a tough target to chase down. First drop batsman Kristian Miller was their best, scoring 95 before being run out.

Long Island would have to chase down 180 to win.

Off the back of Boxell’s knock, Long Island were able to reach their target with three overs left to play. They still had four wickets to spare.

Flinders notched up a win in their clash against Moorooduc on Saturday. They chased down a target of 181 thanks to a 124 run stand between Matthew Gale and Andrew Power.

Somerville’s run chase was restricted by some impressive bowling. James Abbott took 3/7 off his four overs.

FRANKSTON YCW were victors in a thrilling matchup against Carrum on Saturday.

Carrum set their opponents 153 runs to win. Corey Hand was their best with the bat, scoring 45 not out.

Frankston YCW were neck and neck with Carrum throughout their run chase, and ended up hitting the winning runs in the final over.

A 99 run opening stand by Matt Foy and Luke Hewitt wasn’t enough for Hastings to win against Pearcedale.

Pearcedale were set 148 to win, and got started on the right foot. An 83 opening run stand of their own set them up for victory.

With eight overs left in the day, Pearcedale wrapped up the well-earned win.

Delacombe Park didn’t have much trouble with Crib Point at home, winning by nine wickets.

Chasing 138 to win, Delacombe Park made quick work of the game. Tim Clarke and Matthew Whelan scored 62 and 67 respectively.

Rosebud bowled Dromana out for just 65 at Olympic Park to secure a 99 run win.

A MAMMOTH 179 run knock from Pradeep De Silva got Ballam Park an impressive win on Saturday.

Up against Mt Martha, Ballam Park chose to bat first. De Silva opened and was electric, smashing 13 fours and 10 sixes during his innings. His heroics helped his side to a huge total, finishing at 5/263.

Mt Martha were bowled out for 187, well and truly short of what they needed to win. David Cross took four wickets for the winning outfit.

An unbeaten century partnership between Scott Manders and Joshua Trevitt proved the difference in Seaford and Skye’s match.

Skye batted first and scored 187 runs. Seaford’s run chase got off to a decent start, but at 4/90 Skye were still in with a chance.

Manders and Trevitt came in and put the game beyond doubt, handing Seaford a six wicket win with four overs left to play.

Tootgarook nearly defended a low total to win against Boneo, but couldn’t get the job done.

Tootgarook were bowled out for just 104, with only opener Travis French contributing a decent total to the scoreboard.

Boneo’s run chase was far from smooth sailing, losing 3/11 in one spell and 4/9 in another. They were eventually able to hit the winning runs with eight balls left to spare. They had three wickets left when they reached their target.

Balnarring were defeated at home on Saturday. Tyabb scored a seven wicket win thanks to half centuries from Aidan Pateman and Paul Nelson.

RED HILL won in a final-ball thriller against Baxter on Saturday.

Baxter set their opponents a tall mountain to climb. Red Hill were going to have to hit 208 runs to claim victory.

Red Hill’s run chase got off to a nightmare start, but cometh the hour, cometh the man.

Coming in at 3/12, Adam Slack completely changed the course of the match. He got his side back on track, and as they entered the final over they were still in with a chance to win.

Slack hit the winning runs with the final delivery of the game, giving his side a famous win. He ended up on 98 not out.

Langwarrin scored a good win away on the weekend, taking the points against Baden Powell.

Langwarrin set their opponents 186 to win, and bowled well. A late collapse cost Baden Powell badly, as they fell from 5/121 to all out for 151.

A total of 159 wasn’t enough for Mt Eliza in their clash against Mornington.

Although they looked shaky at times, Mornington were able to wrap up a win with three overs and three wickets left to spare.

Sorrento won by five wickets on Saturday after bowling Old Peninsula out for 94. The result was a disappointing one for Peninsula OB, who have made an impressive start to the season.