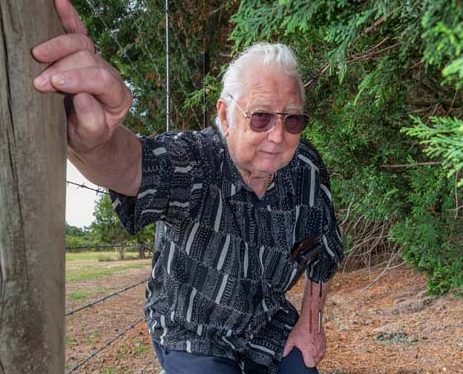 A HASTINGS man is fed up with the lack of support he is receiving in trying to control rabbits coming onto his property.

Colin Fitches said the rabbits were from a much larger property behind his 0.809 hectare block on Hodgins Road.

Because his land is privately owned, he says Mornington Peninsula Shire Council won’t do anything about them.

“The situation’s so bad it’s gone beyond a joke,” Mr Fitches said.

“I’ve been here 20 years but the last 12 months have been the problem.

“I can sit outside and watch them coming onto my property.”

Mr Fitches said he had been in touch with the Agriculture Minister, Hastings MP Neale Burgess, the shire’s biodiversity officer and the Cranbourne office of the Department of Agriculture.

They all offered advice, but the end result is that Mr Fitches is left with a very expensive problem not of his making.

“I’ve been told the land owner behind me is responsible. He has extensive areas of [noxious weed] blackberry and tea tree over two metres tall on his property and he has been told to clean them up,” he said.

So far, that approach has not worked and even the Agriculture Department – which has been in contact with the neighbour – admits “there will [not] be much action there”.

Mr Fitches says a housing estate further west along Hodgins Road has also “pushed” the rabbits towards his property.

“I’ve been buying carrots to bait them at $5 a bag which I soak in [rat poison] and I’ve also been advised on how to procure K5 calicivirus at $130 a vial,” Mr Fitches said. “They burrowed under the water tanks and that cost me $6000 to repair.”

Mr Fitches said he had noticed “warrens all over the place” in the past six months. “I see them everywhere but how much time and money do I have to spend to control them?”

That’s a hard question to answer as a single female rabbit can produce up to 160 kittens a year, of which 80 per cent are female.

Agriculture Victoria, which has been in contact with Mr Fitches neighbour recommended he erect “exclusion fencing along the back where you think they’re getting in”. Mr Burgess said he was contacted by Mr Fitches and another constituent in December about “out of control rabbit populations” on the peninsula.

“Mr Fitches lives on two acres and his property is being destroyed by rabbits who inhabit 20 acres behind him,” he said. “Another constituent owns a Christmas tree farm and rabbits are causing significant damage to his property and business.”

Mr Burgess said he wrote to the Agriculture Minister Mary-Anne Thomas in mid-December and that the reply placed the onus of rabbit control onto the landowners.

“Both our constituents feel that due to the breeding patterns of rabbits, they cannot manage this pest control without intervention from the department,” he said.

“In the minister’s reply, it was mentioned that the constituents could purchase the K5 virus at their own expense to control populations. A quick search online shows you can only purchase this virus if you have a pest control licence.”

Mr Fitches says he was told by Agriculture Victoria that he did not need a licence to release the K5 calicivirus – that “anyone can do it”.

Mornington Peninsula Shire’s interim director of place Jessica Wingad said the shire did not “provide rabbit control services for private property but are happy to assist owners with advice on how to go about it”.