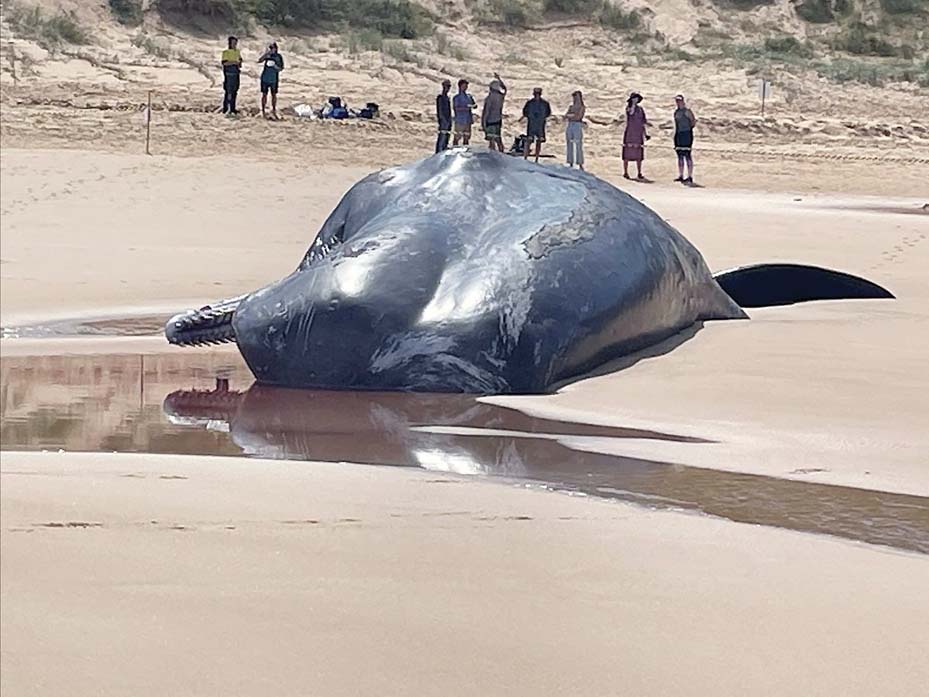 A SPERM whale found stranded on a beach at Phillip Island over the Labor Day long weekend (Picture: Gayle Seddon) above, and a dolphin takes a leap in Western Port.
Share
Facebook Twitter LinkedIn Pinterest Email

ALTHOUGH it has been 30 years since an organisation was formed to investigate and improve the lives of dolphins in Port Phillip and Western Port, many questions remain unanswered.

Solutions to some lifestyle problems have been found, but recent events have again highlighted the mysteries that remain.

A sperm whale washed ashore at Phillip Island over the Labor Day long weekend and researchers have been unable to explain why so few dolphins live in Western Port compared to Port Phillip.

Executive director of the Dolphin Research Institute Jeff Weir, said dead whale and dolphin numbers were just two examples of the DRI’s “critical role” “in filling gaps and finding solutions that are only possible because of the decades of experience, understanding, and skills we have developed”.

He said sharing skills with DRI  i sea, i care ambassadors, interns and volunteers “empowers them to help us by working as agents of change in their communities”.

Mr Weir said Western Port was about 60 per cent smaller than Port Phillip but only had about 10 per cent of the number of resident dolphins.

“Nearly three decades of community sighting reports and our own surveys suggest there are about 20,” he said. “These dolphins are a bit of a mystery, so gaining a greater understanding of their lives and use of the bay is crucial to their protection.” Mr Weir said the sensitivity of dolphin populations in Western Port had been highlighted in environmental investigations into the impacts of AGL’s proposal to build a gas import terminal in the bay.

“Most sightings come from the western side of the bay, but we also have some from Tooradin, north of French Island, Rhyll, San Remo and Cape Woolamai. We also know that some dolphins move between Port Phillip and Western Port,” he said.

“A pilot study is underway to investigate the areas dolphins use the most and how much of their time is spent travelling, feeding, nursing young and interacting with people, vessels and animals.”

Mr Weir said the study’s results were “discussed” with the Department of Environment, Water, Land and Planning “to ensure greater protection for these dolphins”.

Mr Weir it was “always sad” and there was “no single cause” for whales and dolphins to be stranded.

DRI research officer David Donnelly correctly identified it from images “soon after the animal was found”.

“This is a key role that DRI plays [and] it’s quite frustrating that our team is not called in at the beginning of these incidents, as our many decades of experience would help avoid such confused messaging,” Mr Weir said.

“Sperm whales normally feed on squid in thousands of metres of water off the continental shelf.

“This whale is at least 400 kilometres away from its normal feeding grounds off western or eastern Bass Strait. We can only speculate why it has stranded — although solitary strandings of whales sometimes indicate the animal is sick.”

Mr Weir said the whale was being left on the beach to decompose and “let nature take its course”.

THE Dolphin Research Institute will hold the first of several celebrations of its 30th anniversary on from 6.30pm on Saturday (20 March) at Two Bays Brewing, 1/2 Trewhitt Court, Dromana.