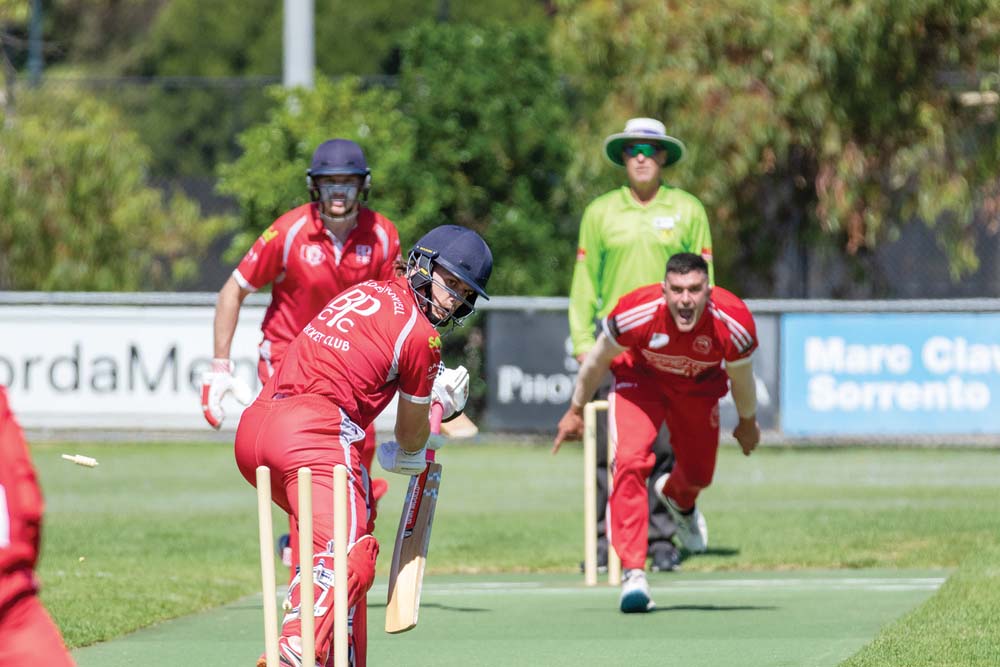 Baden Powell was sent in to bat first on Saturday in wet conditions. Opener Beau Anthony made a good contribution of 32 runs, but he didn’t get much support from his teammates.

A late showing from the tail end helped Baden Powell reach a final total of 125.

Sorrento’s run chase got off to a steady start. Opener Corey Harris and first drop Robert Wilson combined for a 68 run partnership.

After that partnership fell, Sorrento started to struggle. Wickets fell quickly, and the side went from 1/81 to 6/99 before Leigh Poholke took to the crease.

Poholke’s knock of 25 not out proved the difference. Sorrento ended up wrapping up the win with two wickets left to spare, securing them the premiership.

LONG Island are Peninsula division champions after defeating Pines in a nailbiter.

Long Island’s top order showed their talent to start with. Zac Wilson was top scorer with 46, but Nick Jewell, Pubudu Edirisinghe, and Tom Boxell also put runs on the scoreboard.

Once the top order fell, Long Island collapsed. Their capitulation from 3/125 to all out for 134 left the door open for Pines to take the win and the premiership.

Pines had a frustrating time at the crease, with none of their batsmen capitalising on good starts.

At 9/84 their premiership hopes looked dashed, but a late partnership between Patrick Jackson and Riki Anstiss gave them a flicker of hope. The tailenders combined for a last wicket partnership of 48, but it wasn’t quite enough to get over the line.

Anstiss was run out in the final over, bringing the game to a close. Pines finished all out for 132, three runs short of victory.

ROSEBUD have been crowned District premiers on their home deck.

After choosing to bat first against Delacombe Park, Rosebud had a good time at the crease. A strong 71-run opening partnership between Lyle House and Scott Hayes set the home side up beautifully.

Rosebud’s innings expired with the side at 6/156.

Delacombe Park’s batsmen chipped away at their target, but none of them had a huge impact.

A late collapse killed Delacombe Park’s chances of victory. Their last six wickets fell for only 33 runs, dooming them to defeat.

Rosebud were declared champions with a 34 run win.

After an impressive half century in the semi-final the week prior, Quarmby came to play again last weekend in the season decider. He hit 64 runs to help his side to a final total of 151 on their home deck.

Their Grand Final opponents, Tyabb, struggled early on in their run chase. At 4/23 their premiership hopes looked all but gone.

Tyabb was bowled out for 107. Carrum Downs claimed the title of champions with an impressive 44 run triumph.