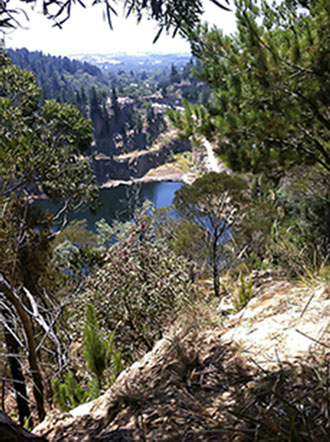 AN ALLIANCE of environmental, business and philanthropic groups has been formed to stop the Ross Trust opening a new quarry on Arthurs Seat.

More than 70 organisations and individuals signed an open letter calling on the trust, which has more than $60 million in assets and investments, to abandon its application.

Several major Mornington Peninsula tourism operators have also signed, concerned about the scar the quarry – estimated at 21 MCGs – would leave on what is described as a “signature vista of Port Phillip”.

In reply, the Ross Trust and Hillview Quarries said they had been a part of the peninsula community for more than 50 years and had a “proud history of supporting many causes, including environmental projects and preservation of the natural environment”.

“The trust has previously gifted some 170 hectares of land in Dromana to the community, incorporating it into the Arthurs Seat state park. [We have] has also provided more than $139 million in grants supporting local communities, children at risk, and environmental and biodiversity projects throughout Victoria.”

However, some environmental groups to have previously received money from the Ross Trust are moving to suspend their relationships, .

The trust – established under the will of quarryman Roy Everard Ross who died in 1970 – is the only philanthropic charity in Australia that finances its grants (about $4.5 million a year) through the proceeds of a quarry.

The proposed quarry site is 800 metres from the boundary of the Red Hill Consolidated School and 1.7 kilometres south of the Dromana Drive-In. The trust’s application is going through “the very early stages” of an environmental effects statement process with a decision by Planning Minister Richard Wynne expected next year.

The open letter was coordinated by Peninsula Preservation Group which says more than 40,000 people have signed a change.org petition against the new quarry.

The group’s public profile is now being steered by a committee that includes established heavy-hitters in the PR field, including former The Age editor, Mike Smith.

“Given that the trust’s mission is to enhance biodiversity, it is breathtaking hypocrisy for [it] to seek to fund its activities by bulldozing remnant bush and destroying a critical wildlife corridor that is an irreplaceable koala, bird and small mammal habitat,” Peninsula Preservation Group president Dr Mark Fancett said.

“The concerns expressed in the open letter and the action taken by environment groups in rejecting future funding shows that the Ross Trust is becoming isolated and is sadly out of touch with community expectations.

“The Ross Trust can be a philanthropic charity focused on conservation or it can be the developer of a new open cut mine: it can’t be both.”

The group is holding a Save Arthurs Seat Virtual Town Hall Meeting, 7pm, Thursday 25 March, to explain the impact of the proposed new quarry. Details: savearthursseat.com or see Facebook @SaveArthursSeat