WOMEN and men of all ages joined the March 4 Justice at Rosebud where an address by Cr Sarah Race (left) drew an emotional response from her Mornington Peninsula Peninsula Shire Council colleagues Kerri McCafferty and the mayor Despi O’Connor. Pictures: Yanni

As the marchers set off from Rosebud pier a coordinated sit-in was held outside the Somerville office of Flinders MP Greg Hunt and thousands of women and men gathered outside Parliament House in Canberra.

Mr Hunt was inside the building, as was the Prime Minister Scott Morrison, who has been heavily criticised for not venturing outside to hear speakers at the rally.

The Minister for Women Marise Payne, also a no-show outside Parliament House, told a succession of newspaper and television reporters that the leaders of the rally were welcome to meet with her or the prime minister in their parliamentary offices. 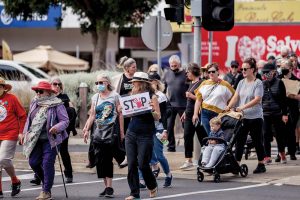 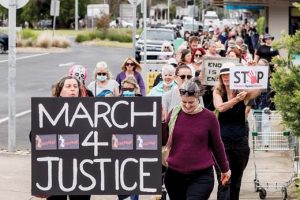 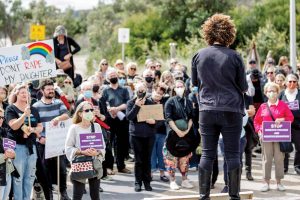 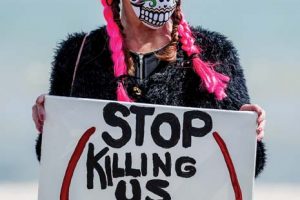 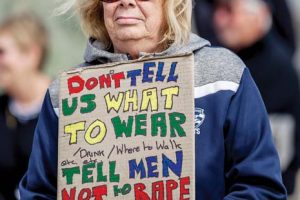 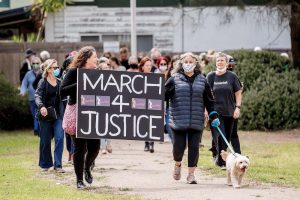 Here is Cr Race’s speech delivered to the marchers gathered around the Rosebud sound shell:

“I acknowledge that we meet on the lands of the Bunurong/Boon Wurrung people, the custodians of the land and sea of our beautiful peninsula. I pay respects to their elders, past and present, and those of other Indigenous lands here today.

I want to recognise the kaleidoscope of sisters we have present; our black sisters, our rainbow sisters, our disabled sisters and our sisters from across the seas, each with their own battles before them.

I want to recognise our allies and supporters. Today we stand united.

A system where one in three females are abused before they are 18; one in five females have experienced sexual violence since the age of 15; and 93 per cent of these offenders are male.

And yet, sexual assault is one of the most underreported crimes where victims are invisible in official statistics.

So today we march for justice.

We march today to draw a line in the sand and say enough is enough.

For millennia women’s bodies have been used as tools of war – we’ve been raped to breed out our ethnicity.

Our bodies have been marked as property to be transferred from father to husband.

We’ve been told  “lie back and think of England”; “come on love, it’ll only take a minute”; “you know you want to”.

We’ve had our babies stolen from us.

But today we say enough.

We will defend our bodies and we will decide who touches them and the circumstances in which that happens.

We march today for hope.

We’ve picked up the baton from our great grandmothers, our grandmothers and our mothers; we are standing on the shoulders of giantesses.

In 1894, South Australian women were the first in the world to win the right to vote and stand for parliament.

In 1920, Mary Rogers became the first woman councillor in Victoria.

As a community leader I have the privilege of leading a council where, for the first time, we have a female mayor and deputy mayor.

Where we are embedding a gender equity strategy

Where we have reaffirmed our commitment to the women’s charter.

And where our leaders and officers are proudly proclaiming themselves as feminists.

Women are over 50 per cent of the population. We have the power to influence decisions, and we can raise our voices and be heard.

A final flourish of hope from the awe inspiring work The Hill We Climb, by Amanda Gorman:

We will rise from the sunbaked south.
We will rebuild, reconcile and recover.
And every known nook of our nation and
every corner called our country,
our people diverse and beautiful will emerge,
battered and beautiful.
When day comes we step out of the shade,
aflame and unafraid,
the new dawn blooms as we free it.
For there is always light,
if only we’re brave enough to see it.
If only we’re brave enough to be it.”