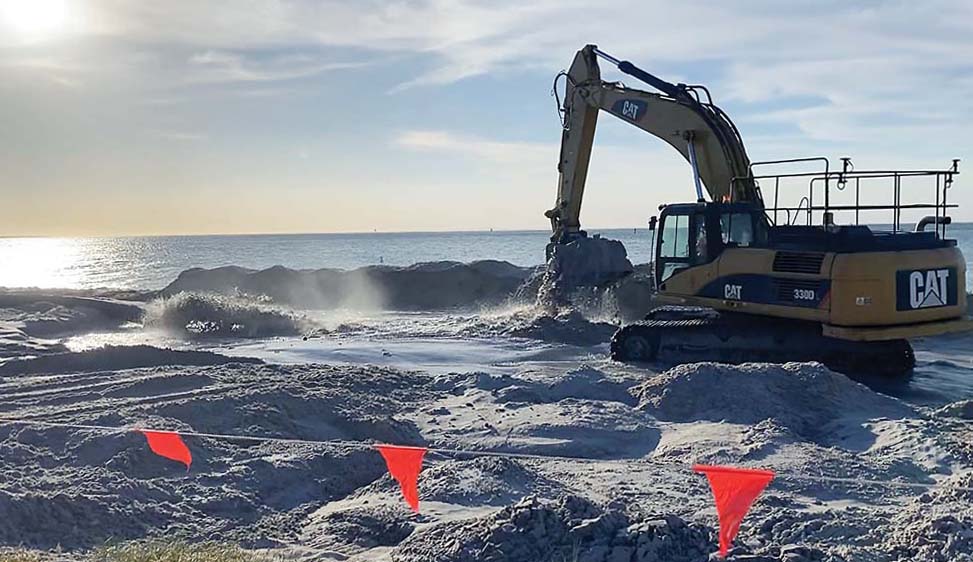 BEACH users at McCrae say the dredging process being used to “renourish” the sand is harmful to the environment and unlikely to be a long term solution to sand.
Share
Facebook Twitter LinkedIn Pinterest Email

THE Department of Environment, Land, Water and Planning says methods of using 20,000 cubic metres of dredged sand to replenish McCrae beach are designed “to avoid impacting any marine values and coastal vegetation”.

“Our marine biodiversity and natural environment team experts have confirmed there are no specific concerns relating to the project with regards to land-based coastal vegetation, the reef, or the plants and animals that inhabit it,” DELWP Port Phillip regional director Stephen Chapple said.

However, long time beach users report that marine creatures are being “shredded” by the DELWP’s dredging machines.

“Some stingrays miraculously made it through the muncher with a wing missing – to be met by hungry seagulls when they were unceremoniously flung out of the pipe,” Julie Davey said.

“This concoction of sand and sea creatures deposited on our beautiful McCrae beach to a level with the car park, is already disappearing. After less than a fortnight one third of the sand has been reclaimed by the sea.”

“Unfortunately, we were met with extreme hostility, a reluctance to consider any of our concerns, and a refusal to stop the works,” Ms Richardson told Mr Hunt.

Ms Davey said regular beach walkers “knew this would happen”. “The same thing happened in Dromana a few years ago with a repeat performance recently.

“They muddied our swimming water over the best part of summer but ,most importantly, there is a huge cost in terms of marine life and dollars for this nonsense.”

Ms Davey feared that the “currently unstable wall of sand” was a safety threat to children.

Ms Richardson said “expert advice” provided to residents “strongly suggests otherwise” to the DELWP’s claim to be not harming the environment.

Mr Chapple told The News that a 2019 re-nourishment assessment of  64 Port Phillip beaches “ranked McCrae as one of the highest priorities, relating to the need to protect public infrastructure”.

“There is an annual loss of sand from west to east along both Dromana and McCrae beaches due to the dominant southerly summer winds, resulting in foreshore erosion,” Mr Chapple said.

“DELWP has designed and implemented the work at McCrae Beach to avoid impacting any marine values and coastal vegetation.”