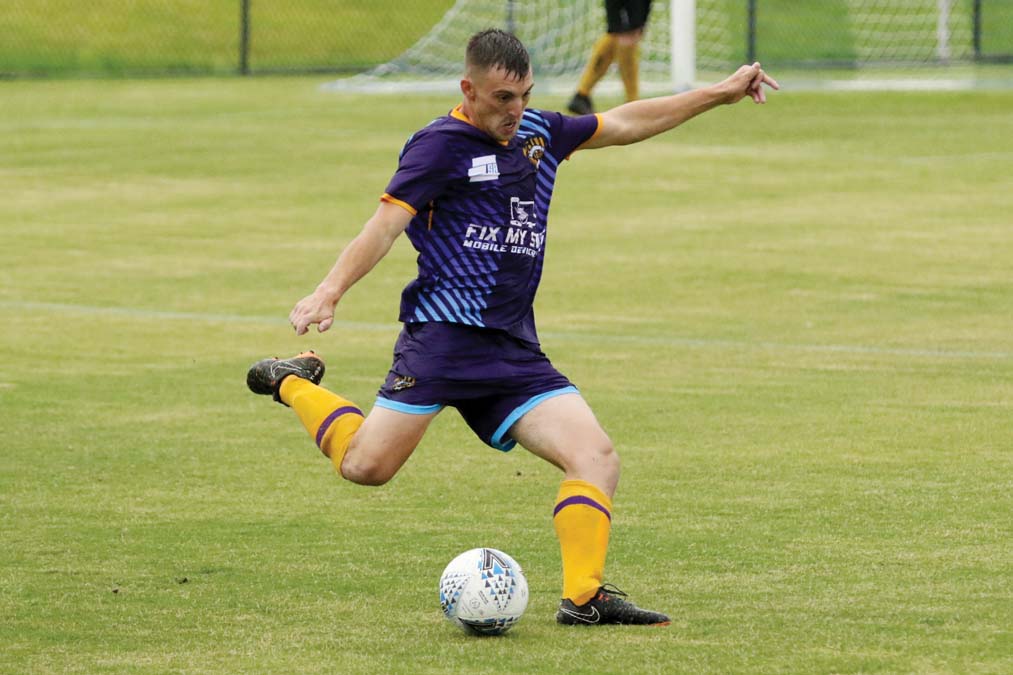 Dingley already was in disarray having dumped coach Stan Webster a few days earlier and Somerville showed no mercy with a Bryce Ruthven free-kick in the opening minute making it 1-0.

Eight minutes later it was 3-0 after Naseer Mohammad finished off a Damien Finnegan through ball and a corner from player-coach David Greening was met with a bullet-like header from Ash Scholes.

A Scholes foul inside the box late in the half earned Dingley a penalty which Koray Yildirim converted to make it 3-1.

But any notion Dingley had of a comeback was soon put to rest as Greening couldn’t be contained after the interval.

He notched a second-half hat-trick and provided an assist for Rannesh Krishnan’s first goal for the club as the Eagles raced to a 7-1 lead before Reece Robinson’s late consolation for the visitors.

New Somerville signing Conor Mcfall from Seaford United came off the bench in the second half and set up Greening for one of his goals.

After the final whistle Greening paid tribute to the efforts of his players.

“The spirit and camaraderie this club has is encapsulated in that dressing room and the boys deserve every credit for putting in a performance like that after a tough start to life in State 4,” he said.

In other State 4 fixtures Seaford United lost top spot with a 2-2 draw at home to Dandenong South, Baxter went down 2-0 away to Keysborough while four first-half goals secured Noble Park United’s 4-0 win over visitor Chelsea.

Seaford could have been two up in the first 10 minutes but Blake Hicks finished poorly and Dylan Waugh was denied the chance of a one-on-one with a dreadful offside decision.

A low shot from outside the area in the 14th minute beat Seaford keeper Hayden Hicks at the near post to put the visitors 1-0 up.

Mitch Hawkins and Waugh had chances to level late in the half and four minutes into the second period Jeremy Schwellinger tripped Malik Sulemani who converted from the penalty spot to make it 2-0.

A free kick in the 55th minute was touched off to Jack Carter who blasted the ball into the roof of the net to make it 2-1 and eight minutes later it was 2-2.

A flowing interpassing move down the left ended with Hicks slipping the ball to Waugh whose first touch took him past the advancing Dandy South keeper and his second touch sent the ball into the unguarded goal.

Seaford kept pressing and Waugh and Josh Simmons should have done better with headers and in the 87th minute Waugh put Hicks through but he blasted his volley well wide.

In NPL2 Langwarrin suffered one of its biggest home losses in years when put to the sword by Moreland City to the tune of 5-0.

Langy defender Luke Burgess has been released and is understood to be on the lookout for a new club.

In State 1 Mornington retained top spot with a 4-1 away win over Bentleigh United Cobras.

A Milos Lujic double and goals from Josh Hine and supersub Campbell Steedman did the damage for the league leader.

In State 2 Peninsula Strikers had an excellent away win against Heatherton United thanks to a Ben Doree double while Skye United recovered from a 2-0 deficit to draw with Mooroolbark at Esther Park.

Jack Gallagher and Mark O’Connor scored for Skye in the 78th and 83rd minutes.

In State 3 Frankston Pines was pushed all the way by big-spending home team Rowville Eagles but ran out a 5-3 winner.

The big news in State 5 was Rosebud’s capture of Keilor Park central defender Dougie Cunnison and the veteran Scot played a major role in the ’Buds 2-1 away win over Endeavour Hills.

The home side led 1-0 at half-time but Rosebud player-coach Mark Pagliarulo pushed Cunnison into midfield in the second half and the change turned the game around for the visitors.

Cunnison won the ball in the 55th minute and played it to 42-year-old Stef Papaluca who saw Endeavour keeper Guilford Vellien off his line and lobbed him from 35 metres for the equaliser.

Pagliarulo had subbed himself on and in the final minute his cross from the left was bundled over the line by Chris Parry for the winner.

Aspendale Stingrays marked their tribute game to former player Dylan Langford-Povey with their first win over White Star Dandenong in a 4-1 result at Jack Grut Reserve.

Injuries and suspensions forced the Stingrays to field a depleted line-up and visitors White Star led after 22 minutes through a shot from Amel Mulalic that eluded a number of players.

Nuhanovic’s second in the 63rd minute gave the home side breathing space and substitute Justin Lampert rounded off the scoreline in the 90th minute following a fine run from right back Ryan Maokhamphiou.

In FFA Cup news three local teams go into battle this week to reach the last 16 of the Victorian section of the national competition.

State 3 league leader Frankston Pines travels to ABD Stadium in Broadmeadows tonight (Tuesday) to face NPL heavyweight Hume City in a David and Goliath tie which kicks off at 7.45pm.

Here are this weekend’s round 6 league fixtures: