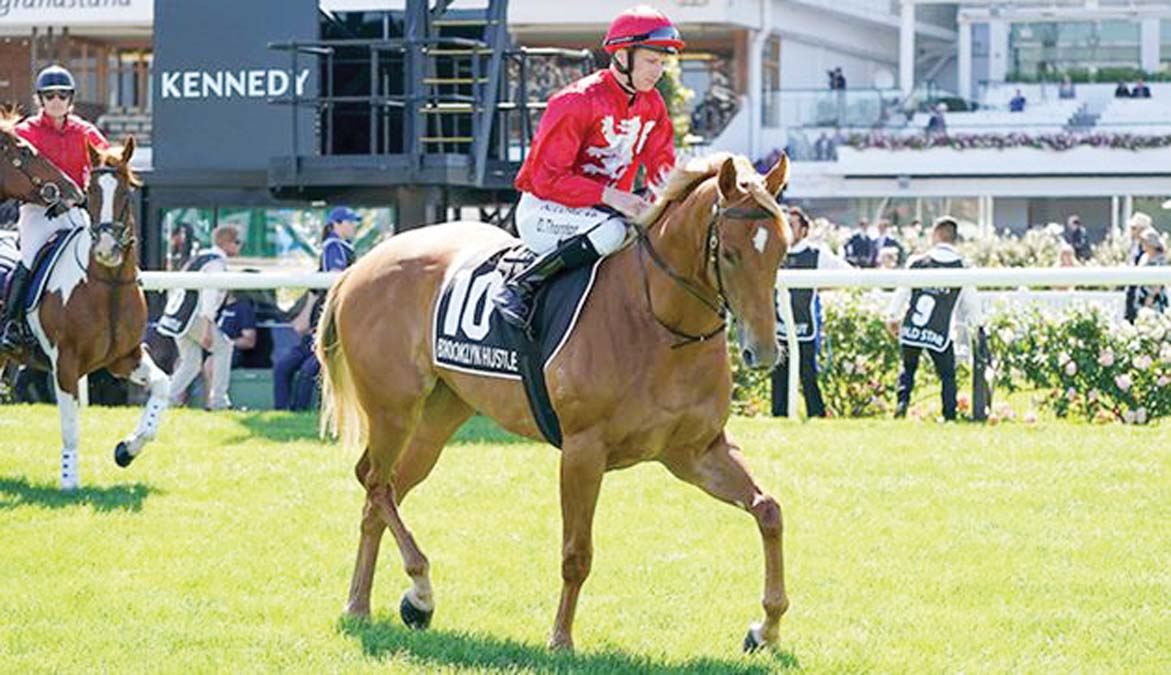 FLASHY mare Brooklyn Hustle has broken through for Stakes class success in Adelaide for training partnership Jason Warren and Dean Krongold on Saturday 15 May.

The four-year-old daughter of Starspangledbanner has always promised plenty with her fast-finishing sprints in Group One company but has never quite had the luck go her way to secure the victory.

But, the drop back in class to the Group Three Proud Miss Stakes (1200m) on Saturday proved successful as she dashed up the inside rail for jockey Jamie Kah and ran away with the spoils.

Despite being slow away from the barriers, Brooklyn Hustle still proved too classy for her opposition winning by one-and-a-half lengths over the Levi Kavanagh-trained Wild Vixen, with John McArdle’s ever-consistent mare Humma Humma finishing off well for third.

Mornington-based co-trainer Jason Warren said it was terrific to see her finally break-through for Stakes success.

“She’s been putting the writing on the wall,” Warren said.

“We thought she’d come here and do this but you always want to see them get the job done. She’s obviously had some rapts on her, she’s always the one flashing home but when she was a bit slow away today, I thought ‘oh god, don’t tell me it’s going to happen in this race as well’.”

Sitting on the mare for the first time at the races, inform jockey Jamie Kah continued her remarkable run of late and brought up her 11th winner from her last 18 rides.

Kah was thrilled to see the Rosemont Stud-owned mare be rewarded with a well-earned win.

“There’s not one more horse out there that deserves it more than her,” Kah said post-race.

“She’s run some amazing races in some really good Group Ones and she really deserved that today. I was [concerned] coming out of the gates. I had my heart in my mouth. She jumped and slipped and actually lost her back end for a few strides so she’s done a massive effort to pick up and run on like that.”

Warren said Brooklyn Hustle will now head to Queensland with the ultimate aim being next month’s Group One Tattersalls Tiara (1400m) at Eagle Farm.

It’s the end of an era for another talented Mornington-trained mare as John McArdle’s Humma Humma bowed out with another placing in the Proud Miss Stakes, having won the event last year.

McArdle said it was an honour to train the mare who always fronted up in every race she contested. She ends her career with the Group Three win to her name as well as being 12-times Stakes placed.

“She’s been very good so it’s a little bit bitter sweet but she’s done everything we could’ve asked of her,” McArdle said.

“She’s been an incredibly consistent mare and she goes out there and tries which is why she’s a stable favourite. She goes out every time and she gives it everything she’s got. It’s a bit of a heavy heart but hopefully her two sisters that we’ve got in the stable can reach her level. She’s been a good horse to train.”

One of the sisters, Tycoon Humma, is already a Listed winner and is unbeaten from two careers starts.