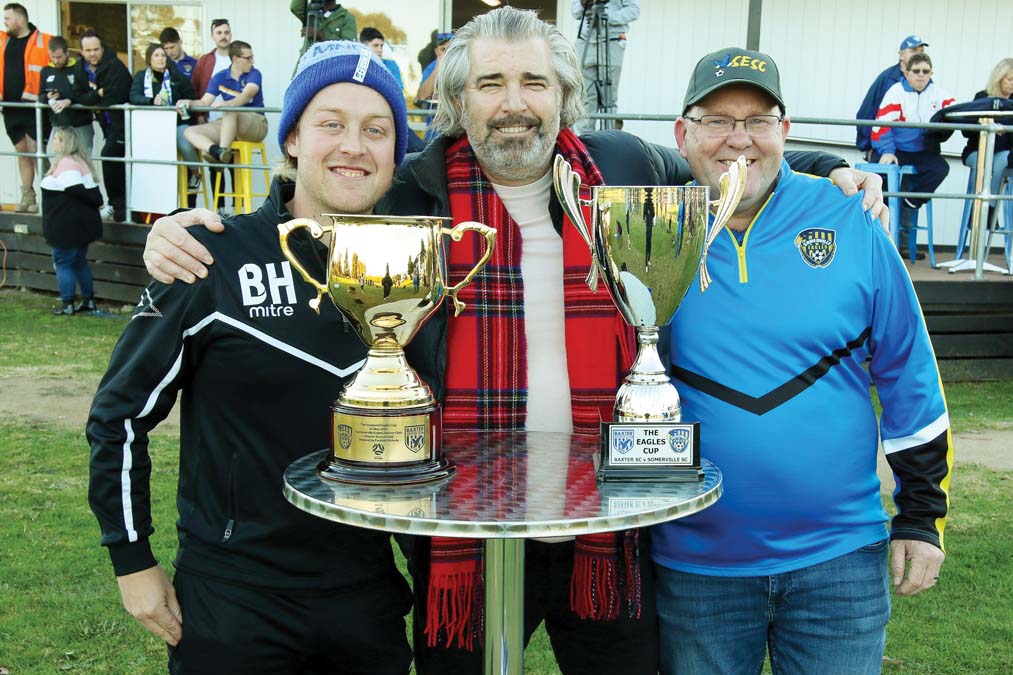 FOOTBALL Victoria CEO Kimon Taliadoros remains hopeful that the state’s seven-day lockdown has no lasting effect on local clubs but acknowledges that 2020 has taken its toll.

“The unknown for all of us is obviously the extent of the lockdown,” Taliadoros said.

“While that impacts on our fixtures if it only lasts for seven days then we face a less complicated scenario than if it is extended for another week or longer.

“If the number of games required to be played becomes an issue then it possibly means midweek fixtures.”

FV’s competitions department already has contacted clubs directing them to switch any Friday night fixtures this week to Saturday and local outfit Frankston Pines has obliged.

Taliadoros stepped down as FV president earlier this year to take on the CEO’s role and has been heartened by the sport’s ability to bounce back from last season’s shutdown.

“If we use 2019 as our baseline and obviously that’s pre-pandemic, the game was in pretty good shape,” he said.

“Most clubs had seen participation growing with an increased focus on both women and girls and also on facilities.

“Going into 2020 our numbers were really encouraging and what we’ve found now, say mid-May prior to this current lockdown, is that our numbers had almost fully recovered to the 2019 levels.

“What that says to us is that the football economy has rebounded strongly.

“Most clubs are back into their regular operating rhythm but some more than others.

“It’s a bit patchy as some clubs are still carrying the legacy of 2020 but the good news for them is that football as we know it has returned and demand is strong.

“Historically (player) registrations continue to increase up until about June so we would say, subject to this lockdown, that the game is in a very healthy state.”

Despite such optimism Taliadoros points out that there are two areas of the game that haven’t responded as well as others and more work needs to be done.

“The first area is club volunteers.

“We’ve found across the board, as have other sports, that volunteers haven’t returned in the same numbers which means there’s more to do for less people which is a strain on clubs.

“And the administrative and logistical challenges clubs face during lockdown are significant having to reach every player and coach while dealing with the expectations of parents.”

The second area of concern has been the lower numbers of match officials who have returned to the sport following the 2020 shutdown.

The impact on the local game has been felt most at State 4 and State 5 levels where it is not uncommon for one referee to officiate at both reserves and senior levels on matchday while having to use club linesmen as assistants.

“We know from our conversations with other sports and with Sport and Rec Victoria that netball, football and basketball have also experienced a shortage of match officials and our numbers haven’t rebounded to the same extent as other parts of the game.”

Taliadoros has been to two local games in recent weeks, a Frankston Pines home match and the recent local derby between Somerville Eagles and Baxter.

He liked what he saw.

“Every time I’ve been to a game on the peninsula there’s always been a positive and enjoyable atmosphere which to me is what football is all about – enjoying the matchday and from my experiences this year that’s certainly been the case.

“In terms of the peninsula what I can probably say is that from 2019 there seems to be a greater level of interest in NPL programs becoming more accessible, especially for boys.

“I don’t think we’ve been able to achieve that on the girls’ side at the moment so that’s a challenge.

“Certainly it appears to me that there is tremendous ambition among the leading clubs as far as their facilities are concerned and their desire to play at the highest level.

“I also see, however, a contrast in support from the two councils in the region so there is work to be done with the clubs and councils there to continue to support the growth of clubs with aspirations.

“And by aspirations I don’t just mean playing at the highest level but in providing a fantastic environment for kids to come and play football and enjoy their local community.”

Taliadoros’ recent visit to Tyabb Recreation Reserve highlighted a major facility problem faced by Somerville Eagles who have to deal with a cricket pitch encroaching on the playing arena and a pitch surface that needs improvement.

“I’ve had a follow-up with the guys from Somerville and we need to get these local presidents together to get some extra leverage (with council).

“Clubs need to get together if they are to give themselves a chance of realising their aspirations.

“Patience, strategy and collaboration are key and we’ve shown that with other LGAs.”

In other news the only local side left in the FFA Cup is Langwarrin which has reached the last 16 of the Victorian section of the national competition.

Langy was due to play its away tie against fellow NPL2 side Moreland Zebras this week but the tie has been re-arranged for Friday 11 June at CB Smith Reserve at 8pm.

Langy and the Zebras are currently in midtable positions on the league ladder with 14 points each.