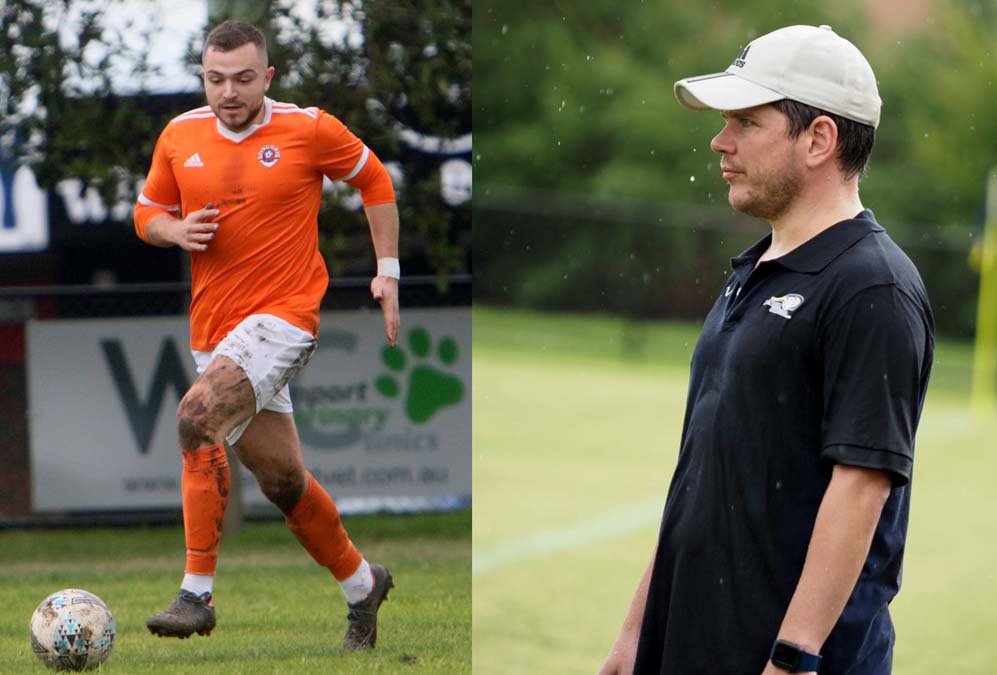 BEN Doree has been forced to quit Peninsula Strikers and has signed with Richmond.

The leading scorer in State 2 South-East has had a change to his work circumstances and found it too difficult to continue to travel back and forward from his Altona residence.

Doree’s goalscoring has been a pivotal part of Strikers’ league campaign so head coach Paul Williams is tasked with covering for his prolific striker’s absence.

Last weekend Williams paired youngster Jai Power with Riley Anderton up front but neither had a major impact on what proved to be a dismal day for the local club going down 1-0 to second bottom side Mooroolbark at Centenary Park.

“Young Jai with a bit more confidence is a goalscorer, we’ve got Aaran (Currie) and Riley (Anderton) was in double figures pre-season so we know we’ve got goals in this team,” Williams said.

The Barkers can thank a wonder strike from outside the area in the 12th minute from Max Soloyev that gave Strikers’ keeper Robbie Acs no chance.

Caleb Nicholes (2), Marcus Collier and Jason Nowakowski were the scorers.

Anton Nardella put Manningham ahead from close range in the 42nd minute but in the 70th minute a Slaven Vranesevic shot struck the near post and Luke Gallo tucked away the rebound.

In State 1 Mornington stayed on course for an NPL berth with a 3-2 away win over South Springvale last weekend.

Two Josh Heaton headers either side of a superb chip from distance by Luke Goulding had Mornington 3-0 up after 28 minutes.

Right on half-time Cody Martindale made it 3-1 and a minute into the second half Tim Atherinos made it 3-2.

South Springvale had a great chance to level in the final minute but Taylor Davidson’s stunning point-blank save from a header was backed up by Heaton who cleared off the line.

Midfielder Kane Bentley made an impressive comeback to the Mornington line-up after his recent return from China.

In State 3 Frankston Pines remained on course for its first league title since 2014 with a 3-1 away win over Brighton that sent the local side 10 points clear at the top of the league.

Pines failed to convert from the spot in the 2nd minute but Jordan Avraham and Joe O’Connor combined in the 12th minute to set up Sava Baledrokadroka for the opener.

In the 27th minute Avraham broke at pace then played the ball to O’Connor who fired across the keeper into the corner from a tight angle to make it 2-0.

Early in the second half Pines keeper Aeseli Batikasa collided with Simon Webster and was stretchered off and replaced by Jarrod Nardino.

Brighton hit back in the 49th minute and a late Simon Webster penalty rounded off the scoreline.

Both sides finished with 10 men.

Pines stalwart and league top scorer CJ Hodgson, filling in at right back, was cautioned twice and sent off in the 85th minute and Brighton captain Michal Knott joined him in the 88th minute after clashing with Tito Vodawaqa.

In State 4 Seaford United’s bid for promotion hit a brick wall at Reema Reserve on Saturday when it crashed to a 6-2 defeat by Endeavour United.

Harry McCartney reports that Seaford was rarely in this contest and was 3-0 down after 30 minutes.

A poor pass back from Jeremy Schwellinger in the 8th minute set up a 50/50 challenge between his keeper Hayden Hicks and Endeavour’s Alex Cunha with the latter coming out on top and stroking the ball into an unguarded goal.

In the 17th minute a quickly taken free-kick caught out the Seaford defence and although Hicks effected a left-footed save Maqsod Mansuri was able to tap in from close range.

Another Seaford defensive error in the 38th minute allowed Cunha to grab his second but two goals in a five-minute burst late in the half from Blake Hicks and Dylan Waugh brought Seaford back into the contest.

Harry Herouvim made it 4-2 in the 62nd minute and in the 75th minute Zaharia Forsyth was put through and beat the advancing Hayden Hicks to make it 5-2.

The home side finished off its opponent when Herouvim nabbed his second in the 86th minute.

Somerville Eagles and promotion challenger Sandown Lions had to settle for a point apiece at Tyabb Central Reserve on Saturday when they drew 3-3.

Recent Eagles’ signing Roneel Kumar from East Bentleigh made his debut off the bench in the second half.

Zach Karolidis put the home side ahead in the 23rd minute following up a Greening volley well saved by Sandown keeper Riad Dagher but Duol Kuei scored from the spot two minutes later.

A superb half-volley from Karolidis made it 2-1 in the 29th minute but five minutes from the interval a Gatwech Kuichloch header made it 2-2.

An audacious Greening overhead kick four minutes into the second half made it 3-2 but an excellent header from Dobuol Kong in the 68th minute secured a point for the visitors.

The only local State 4 side to win last weekend was Chelsea who defeated FC Noble Hurricanes 1-0 at Alex Nelson Reserve on Friday night.

It was Chelsea’s first away win this season and came in spectacular style thanks to a Max Timuska-Carr overhead effort in the 15th minute.

Baxter lost 4-0 away to Dandenong South.

George Hughes’ side went behind to an early penalty that earned a booking for defender Matt McDermott who was given a second caution after a late challenge in the 23rd minute and 10-men Baxter had a mountain too big to climb.

In State 5 an Adrian Pace brace helped Aspendale Stingrays stay in the promotion mix with a 4-2 home win over Knox United last weekend.

The weather forced the match to be switched from Jack Grut Reserve to Aspendale Gardens Sports Centre due to the pitch conditions.

The sides were locked at 2-2 at half-time with Aspendale’s goals coming from Hayden Nuhanovic and Sam Timuska-Carr.

Matt Bruce had stood out in the reserves match and came off the Aspendale bench in the 58th minute to great effect.

He set up Pace’s goals in the 75th and 87th minutes in a fine second-half performance from the home side whose best were Ryan Maokhamphiou, Noah Berends and Pace.

Rosebud earned a point with a 1-1 away draw against South East United while Mount Martha lost 3-0 away to White Star Dandenong.

Iglia Malisan scored for the ’Buds but the home side levelled in the 88th minute.

Craig White has returned to Rosebud after leaving early this season due to work commitments.