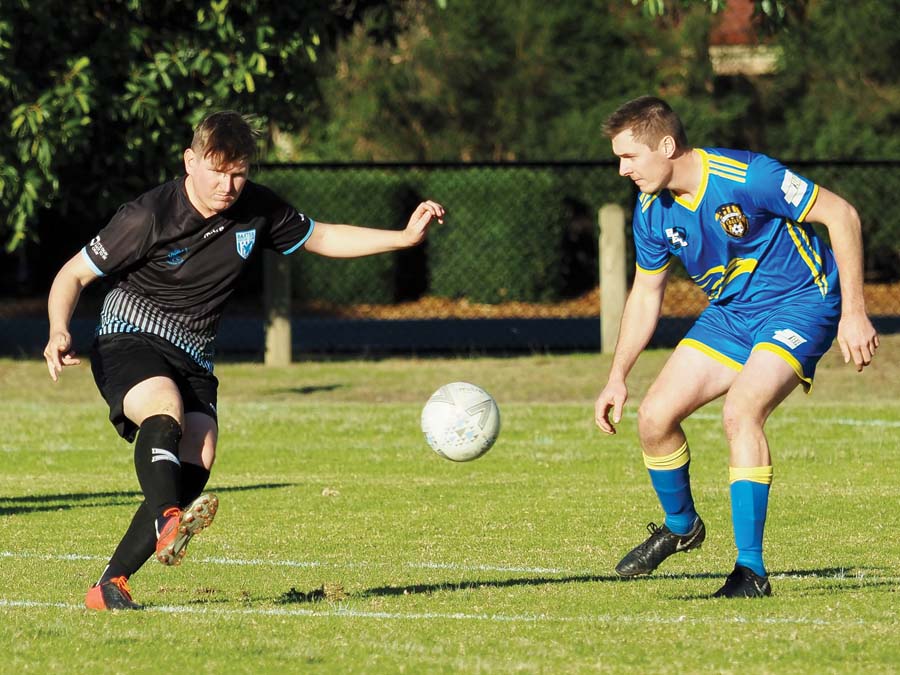 ROSEBUD player-coach Mark Pagliarulo was over-the-moon when he clinched the signing of Ash Scholes last week.

“Pags” had been chasing the 27-year-old’s signature for some time and was close to signing him a few months ago.

“I tried to get him at the beginning of the season but he wanted to stay loyal to Somerville but recently we spoke and he wasn’t enjoying it there so decided to come down,” Pagliarulo said on Friday.

“He’s a massive signing for the club, a local lad and a top defender.

“He’s a big boy, strong, good in the air and a good lad to have around the place, a very honest player who gives 100 per cent every week.

“Massive thanks to Somerville for releasing him with no dramas as it wouldn’t have been easy losing one of their top players but they sorted it for us straight away so he could play this weekend.”

He’s been given the No 95 shirt, a humorous nod to his pace and a reference to Lightning McQueen in the animated Pixar film series “Cars”.

Scholes had an excellent debut on Saturday as Rosebud defied the odds with a 3-1 away win over State 5 South promotion candidate Hampton Park United.

The home side led after 32 minutes but Pagliarulo levelled two minutes later with a quickly taken free-kick.

Just before half-time Dougie’s Cunnison’s ball across the face of goal was headed home by Iglia Malisan from close range to give Rosebud the lead at the interval.

In the 58th minute a left-foot strike by Pagliarulo was parried by Hampton keeper Jack Lindsay but Callum Norton followed up to seal the deal for the visitors.

Pagliarulo was delighted with Scholes’ performance and is looking forward to the return of Cal Richardson who is expected to train this week after taking a short break from the game.

Slowly but surely Rosebud is building its senior squad and its player-coach has high ambitions.

“Big Ash slotted in well and had a brilliant debut,” he said.

“But the next two games are huge for this football club against Aspendale and Old Mentonians if we are to push for promotion this season.”

In NPL2 Langwarrin left John Cain Reserve with all three points courtesy of a 2-1 win over Northcote City.

A Tom Youngs penalty deep into injury time was the decider.

Youngs had drawn the sides level earlier in the match with another penalty conversion after midfielder Rogan McGeorge was fouled inside the area.

In State 1 Mornington had to settle for a 2-2 draw against Warragul United at Dallas Brooks Park last weekend.

Josh Hine put the home side ahead in the 15th minute with a neat left-foot finish but a Henri Scott brace sent the visitors into the break with a 2-1 lead.

Josh Heaton grabbed the equaliser in the 55th minute when a Luke Goulding corner dropped at his feet and the big man slotted it into the far corner.

In State 2 news Peninsula Strikers’ away game on Friday night against Doncaster Rovers was postponed due to the state of the pitch.

Mooy was in his late 20s with an infant son.

Older brother and Socceroo midfielder Aaron Mooy posted an emotional tribute on Instagram writing “… we will miss you everyday. I’m sorry I didn’t do more to help you … and now it’s too late.”

Skye United lost 4-1 at home against Old Scotch on Saturday with Mark O’Connor scoring for Skye.

In State 3 Frankston Pines’ momentum towards the title continued with a 2-1 away win over Elwood City.

Mitch Hawkins and Almand Thomas were Seaford’s other scorers while player-coach and ex-Seaford star Dave Greening replied for Somerville along with Michael Clark.

Waugh is leading in the race for the league’s Golden Boot award with Greening in second place.

Baxter recorded its biggest away win of the season last weekend when it thrashed FC Noble Hurricanes 4-0 thanks to a Nat Daher hat-trick and an own goal from Hurricanes’ Emmanuel Deiwal.

The match marked the return to the starting line-up of Robbie O’Toole who was injured in the first few minutes of his only other appearance this season.

That was against Hurricanes at Baxter Park in late March.

Chelsea had to switch Friday’s home fixture against Endeavour United to Saturday due to a floodlighting problem and lost 1-0.

Chelsea’s Danny Graham was sent off in the 64th minute and the winner came 10 minutes later after multiple deflections in the box ended with an effective backheel from Endeavour’s Maqsod Mansuri.

In other news Endeavour Hills has withdrawn from the State 5 South competition.

We were awaiting Football Victoria’s response but the protocol is to award 3-0 walkovers for Endeavour Hills fixtures.

In FFA Cup news there are no local clubs left in the national competition after Langwarrin lost 3-1 to Moreland Zebras at CB Smith Reserve last week.

The sides were locked together at 1-1 at half-time with Isiah Joseph scoring for Langy but a penalty in the 61st minute was converted by Josh Knight to put the home side ahead.

Then two rapid fire cautions for Langy’s Sammy Orritt reduced the visitors to 10 men and David Cardamone completed the scoreline in the 74th minute.