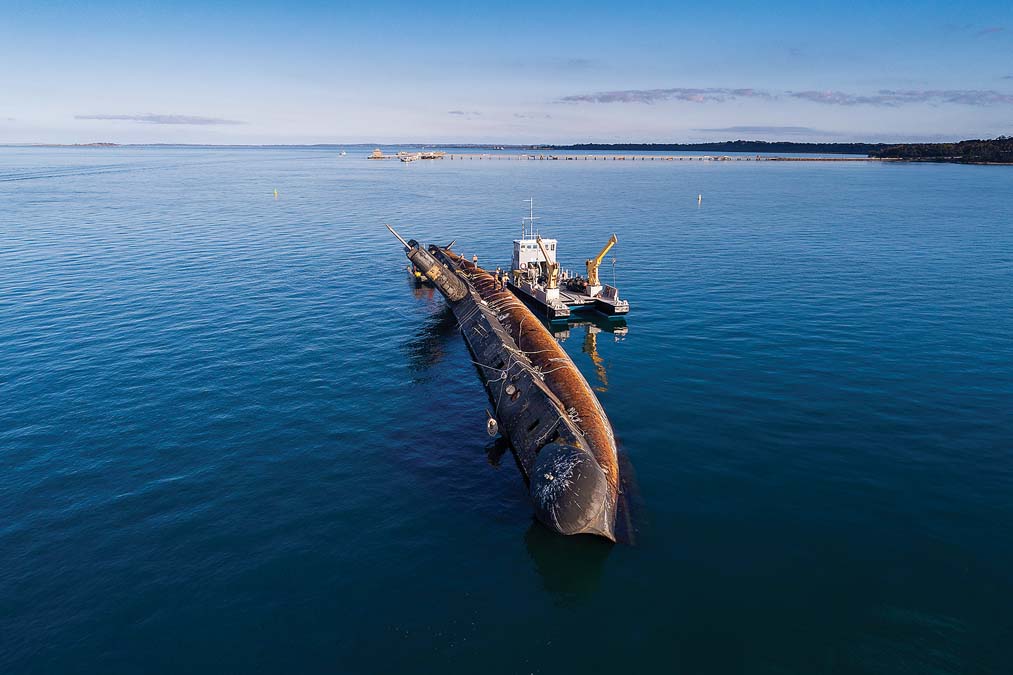 THE stricken Otama submarine is likely to be towed closer into the shallows at Crib Point to stop it sinking in deeper water.

Port of Hastings tenders were last week working alongside the former HMAS Otama last week to stabilise it before it could be moved.

A source close to the vessel’s owner, the Western Port Oberon Association, told The News that Parks Victoria had issued an order for the Otama to be moved by Thursday (8 July).

The expectation is that tugs will move the stricken 1500 tonne vessel to just north of the Crib Point jetty, nudging it into about one metre of water.

“It will probably lie there for another 20 years,” the source said. “It’s already cost the state about $1 million, including last week’s rescue efforts,” the source, who did not want to be identified, said.

Parks Victoria’s regional director marine and maritime Jo Richards on Friday 2 July said plans were “underway to transfer the vessel to a nearby shallow mooring that will help mitigate the risk of sinking in deep water whilst options for the future of the vessel are considered”.

“It is too early to confirm the costs or the future of the vessel as this is a complex issue requiring careful and detailed planning,” Ms Richards said.

“Our resourcing efforts are currently focussed on making the vessel safe and minimising any immediate risks to the public and environment.

“We will continue working with the owner of the vessel and the Commonwealth on the relocation and future of the Otama.”

Ms Richards said stabilising the submarine with inflatable fenders “could allow the association to work through options for the vessel’s future in light of its obvious deterioration”.

Wild weather in mid-June caused a “catastrophic failure of a ballast tank” causing the Otama take in water and Maritime Safety Victoria to enforce a 200-metre exclusion zone around the 1978 vessel it warned was at risk of “capsizing or sinking” (“Submarine’s list poses hazards” The News 29/6/21).

The Oberon-class submarine, brought to Western Port from Western Australia as a potential tourist attraction in 2003, is now 800 metres north of the Crib Point jetty.

The association’s Max Bryant said an agreed two-stage plan would see the Otama stabilised and then moved closer to shore.

“These issues are being undertaken and once they are in hand we will be in a better position to discuss the vessel’s future,” he said.

Mr Bryant said a suitable in-shore mooring would require at least one metre of water under the sub’s keel.

“There’s been a lot of discussion and there are a lot of angry people,” he said.

“It’s had to come to this and now people want to talk to us. The association has so far been thwarted in its plans to use the Otama and the former pilot ship the Wyuna – now moored in Tasmania – as maritime attractions near the Hastings marina.

Mr Bryant said Navy veterans over the years had shown an interest in using their skills and experience to maintain the vessels and, on the flip side, keeping busy and improving their emotional wellbeing.

Mr Bryant said he had written to three Navy chiefs to canvas the idea of getting the “win-win program” off the ground but had heard nothing back.

“That’s been pretty disappointing, particularly in that we are only a couple of kilometres from [Navy base] HMAS Cerberus,” he said.