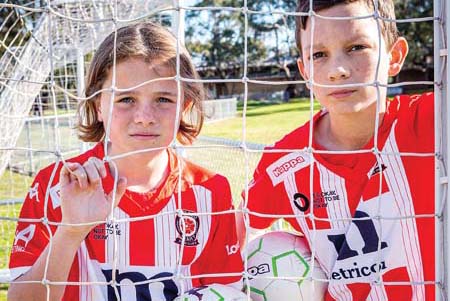 A SPATE of “mindless vandalism” at Rosebud Heart Soccer Club caused lots of damage but failed to dent members’ spirit of optimism.

“What a weekend,” a shocked secretary Lyndsay Richmond said when players and their mums and dads discovered the damage, Sunday 27 June.

Equipment and other property at the Truemans Road Recreation Reserve, Capel Sound, was in a shambles.

“Unfortunately, this week has been a challenging one for the club. Sadly, we have experienced some mindless vandalism,” Ms Richmond said afterwards.

“Our COVID-19 signage has been ripped down and someone with too much time on their hands and a grudge to bear has superglued all of our goal padlocks meaning they could not be used for training.

“This was not enough, though, and days later our container padlock was super glued meaning we could not get any of our equipment out to run our hub on Saturday morning.”

“We at Heart were not going to be beaten nor disappoint our eager 30-strong group of 5-7-year-olds ready for their Saturday morning kick off,” she said.

“It was a perfect example of: ‘When life gives you lemons, make lemonade!’”

Undeterred, members and players set up a big pitch and played a game with the big goals, with coaches Cal and Asa and grandparent Stan all taking a turn there.

“Our kids had the biggest smiles: the ‘lemonade’ was good,” Ms Richmond said later.

“What these mindless acts of sabotage proved was that our community is strong! We have Heart in our name for a reason. Parents went back home for tools and our containers were opened.”

Mornington Peninsula Shire Council said recent acts of vandalism at the Truemans Road Reserve were a “timely reminder for everyone to be vigilant and report any suspicious activity to the police”.

The police and the Mornington Peninsula Shire officers have reportedly increased patrols of the area.

As well as disrupting organised sport or other passive recreation, vandalism costs the community plenty – with recovery of these costs usually impossible.

In cases where those responsible cannot be found, the community has to foot the bill as the repairs are either covered by the clubs, or where the damage is significant, coordinated and funded through the shire.

The mayor Cr Despi O’Connor said acts of vandalism such as those at Rosebud Heart Soccer Club were devastating for the club and the local community that uses the facility.

“I am so disappointed people feel the need to damage public property without any consideration for the disruption they are creating. It’s often the local kids who are impacted the most when they can’t train or play sport on weekends.

“If you see any suspicious activity, please call the police”.