No jabs, but a few barbs at anti-vaxxer ‘rally’ 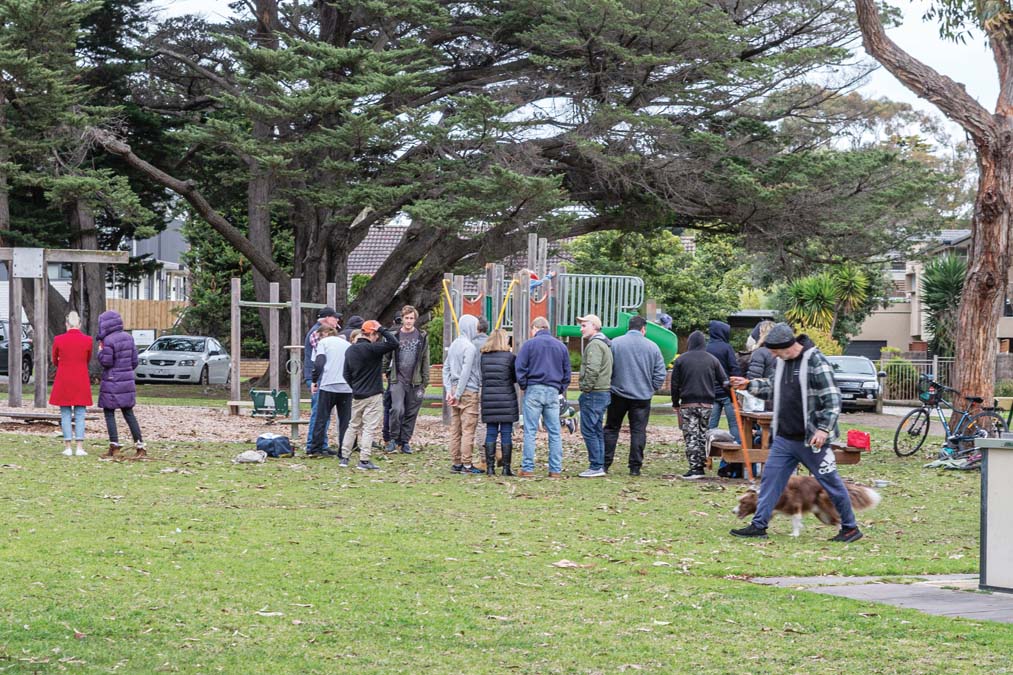 SUNDAY 11 July started with such promise. Reignite Democracy Australia Party’s Mornington Peninsula chapter were gathering for an anti-vaxxer ‘rally’ and organisers had promised “tonnes of parking” and “toilets close by”.

Maybe it was the dismal turnout, but attendees quickly turned their attention to The News’ esteemed photographer, who was equally dejected having rushed to Dromana, on The Lord’s Day no less, on the promise of a ‘rally’ with its connotations of huge crowds, megaphones, and possibly capsicum spray.

What appeared before him was a gathering at best. But really just a few random people standing around.

“We don’t give consent to be photographed”, said a number of the attendees taking umbrage at the attendance of Her Majesty’s Press.

Confusion reigned, as it was a member of Reignite Democracy Australia that had alerted The News of the event. It seemed the left hand did not know what the right hand was doing! And with so few hands?

The organisers may need to reread “Starting a fringe political party for Dummies”, as wouldn’t the point of holding this event in public be to get publicity?

It’s hard for this twice Pfizered writer to justify the paper and ink to explain RDA’s views, but they expound an alternative reality that would make Orwell blush.

Let’s face it, if Facebook says your information is unreliable, you really have problems.

Basically, the members of RDA have adopted a spoiling role, trying to push a metaphorical stick into the spokes of the government’s COVID-19 response.

No lockdowns, no masks and no vaccines are the order of the day.

Attendees had written on their forum, a closed loop of confirmation bias, that they intended to “plaster the peninsula” with “1000s of stickers” expounding their views including one sticker that read The Media Is The Virus (ouch!).

RDA may need to polish up on their political theory as a free and independent media is considered vital to check the ambitions of the powerful in a liberal democracy.

It seems the use of the word “democracy” in their name is a more dystopian, post-truth interpretation.

With our photographer retreating for safety, we are left to surmise how the gathering went.

Maybe they had a game of scratch football in the park. Unlikely, as there were not enough for a team, unless they got the dogs involved.

Maybe they fired up the barbecue, but everybody knows the humble Aussie snag is a delivery device for microchips that embed in our brains, numbing our resistance to the pending alien invasion of nano-bots controlled by Dan Andrews as a triple agent of Bill Gates.

Ok, maybe they just packed up and went home.