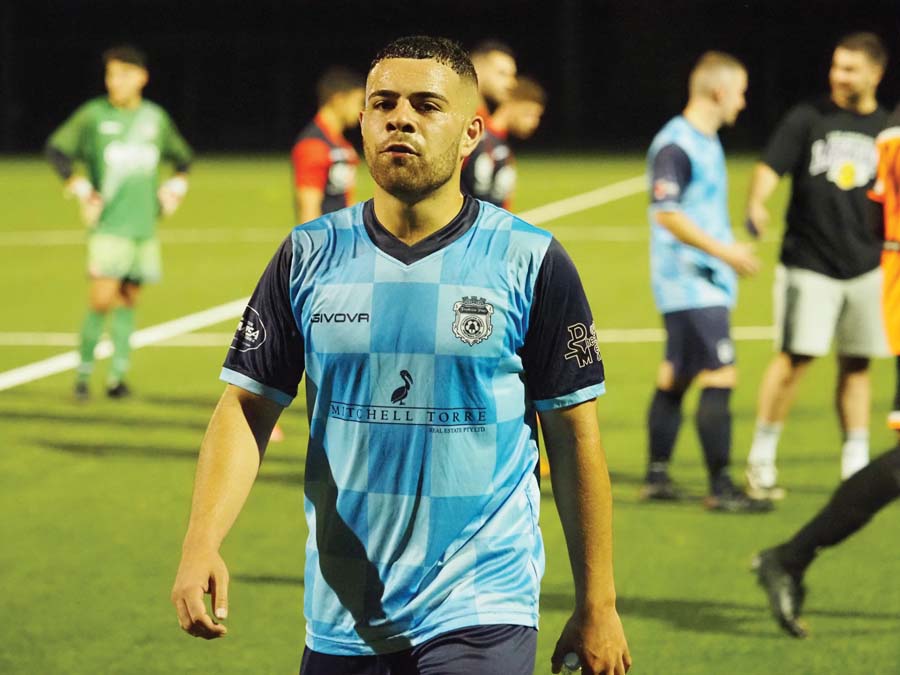 FRANKSTON Pines midfielder Jordan “Caka” Avraham has been outed for seven matches as the result of a social media exchange involving a rival club supporter.

The exchange took place on facebook after Pines lost 2-1 to Hampton East Brighton in their round 7 clash at Carrum Downs Recreation Reserve in May.

FV emailed the club asking for a “please explain” from the player and both Pines and Avraham responded with an explanation of the circumstances of the exchange.

Pines claimed that Avraham and other Pines’ players were abused during the match but on 29 June FV emailed the club to inform it of the suspension.

It is Avraham’s third suspension this season after two previous send-offs.

But the news wasn’t all bad for Pines as the club has been active on the player front signing Marinos Panayi from Beaumaris and Fijian international Nickel Chand.

Panayi is a former Bentleigh Greens, Eastern Lions and Mornington player who can play across the back four or up front.

Chand, 26, has two full caps for Fiji and played in the 2015 Under-20 World Cup against Germany, Honduras and Uzbekistan.

He is a midfielder who played with South Australian club Millicent before moving to Victoria this year.

Last weekend Pines went down 3-2 away to Whitehorse United in a controversial clash.

After the match Pines’ officials were seething with some refereeing decisions and the failure of a club linesman to flag for offside for the home team’s opening goal.

In NPL2 Langwarrin recorded its third away win of the season with a 3-0 victory over Werribee City at Galvin Park on Saturday.

Three minutes in and a superb exchange between Tom Youngs and Damir Stoilovic inside the area saw the latter effect a clinical sidefoot finish at the back post.

In the 21st minute Lucas Portelli sent George Howard down the right and he cut the ball back to the incoming Callum Goulding who took a touch before striking his shot from just inside the area to make it 2-0.

A goal deep into injury time was the icing on the cake for the visitors.

Young’s shot struck the far post and substitute Slaven Vranesevic finished the rebound to give Scott Miller’s side their second 3-0 away result of the season.

In State 1 Mornington won 2-0 away to Mazenod despite being a man down after Josh Hine’s straight red in the second half.

The promotion contender led through a Kane Bentley shot from just inside the area just before Hine’s dismissal in the 64th minute.

But Campbell Steedman’s pace and a clinical finish in the 76th minute sealed the win.

Steedman had come on a replacement for striker Milos Lujic who suffered a severe quad strain and could be sidelined for up to six weeks.

The absence of Lujic and Hine has opened the door for 17-year-old Tom Woods who is expected to be in the mix for a place in the starting line-up for Saturday’s home clash with Bentleigh United Cobras.

In State 2 Skye United fell behind in the promotion race when it lost 1-0 away to relegation-threatened Monbulk Rangers last weekend.

This Saturday Skye hosts Mooroolbark in the Chris Attard memorial round, an annual event celebrating the life of the long-serving administrator who lost his battle with multiple myeloma in 2016.

On Sunday Peninsula Strikers thumped North Caulfield 5-1 at Caulfield Park with doubles from Aaran Currie and Jai Power while Shane Tagliaferro rounded off the scoreline.

“Our quality shone through. I said a couple of weeks ago that there were goals in the team and it showed today,” Strikers gaffer Paul Williams said.

Sixteeen-year-old Sam Delaney came off the bench in the second half for his senior debut.

Doree is rumoured to be unhappy at Richmond and is understood to have contacted Strikers with a view to returning.

In State 4 Somerville has a fight on its hands to avoid relegation after Saturday’s 7-2 mauling at the hands of Springvale City.

The contest was over at half-time as the visitors led 4-0 and despite a Zach Karolidis penalty and a customary Dave Greening goal after the break the home side was well beaten.

A last-gasp own goal allowed 10-man Chelsea to snatch a point from Saturday’s trip to Coomoora Reserve to take on Keysborough.

Chelsea led 1-0 via a William Ong goal in the 10th minute but Ong earned a straight red in the 42nd minute for reacting to an altercation with a defender.

Keysborough scored twice in the second half but conceded an own goal in injury time and the match ended 2-2.

Seaford United was handed a 3-0 walkover after home team Dingley Stars once more defaulted to cast doubts over the club’s State League future.

In State 5 Mount Martha lost 5-1 at home to Hampton Park United after the sides were level at half-time.

Mount Martha had scored through an own goal from Hampton’s Sonny Lindsay but the floodgates opened in the second half.

Rosebud player-coach Mark Pagliarulo was bitterly disappointed with the decision of the referee to call off Saturday night’s Olympic Park fixture against Mentone due to fog.

“They had no keeper and five first team players out so they were happy to get it called off,” Pagliarulo said.

“They were in the ref’s room a few times before the match saying the conditions were too bad and it was dangerous and they were laughing and joking about it afterwards.”