Porsche drives the desert to save lives 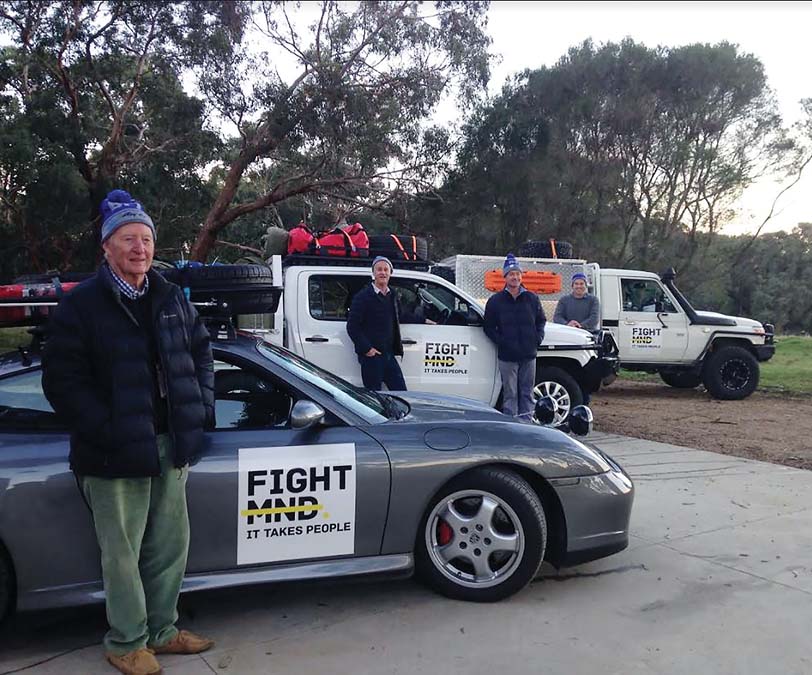 TACKLING the Simpson Desert in a Porsche might seem a daunting challenge, but a group mates from Flinders believe the cause makes it all worthwhile.

They are hoping to raise $100,000 for research – and, more importantly, greater awareness – of the fight against motor neuron disease.

Tom Barr Smith, his son Tom, and five old friends, took off at the crack of a cold Flinders dawn, Saturday 10 July, in the 2003 C4S Porsche knowing it was a mad cap idea but oh so exciting for the 80-year-old Tom Barr Smith and his team of seven.

They did not have any technical assistance, money or expertise behind them – just confidence that the sleek machine designed for highways could handle the unmade outback roads with ease.

The route included an overnight stop at Burra and then on to Marree and the Oodnadatta track via William Creek and a night under the stars at Algbuckina Bridge. This enormous wrought iron structure built in 1867 is the only one on the Ghan Railway never to be breached by floods.

The last pit stop was to be at Dalhousie Springs and then onto the Simpson Desert. What an adventure! Out of the desert it’s off to Birdsville where they will meet up with friends who will be flying up to meet them. From there they head through various private properties to Quinyambie, Mulyungarie, on to Cockburn across the Barrier Highway, between Broken Hill and Adelaide, and on to Mutooroo station and back to Burra.

There are no time schedules as the team has no idea how the un-modified Porsche will cope with the sand dunes. It could also be that the dunes are all right but the gibbers on the stony Cordillo country might roll along underneath and create some unplanned dilemma.

“Tom and his mates are on a determined mission to complete this exciting journey and raise funds,” friend Mary Iles said. “The context to this venture is sad. Almost at the same time both Neale Danaher and Tom senior’s wife, Jenny, were diagnosed with MND. What the legendary Neale has achieved in the intervening time is amazing to all Australians.

“That Jenny hasn’t been here to help is a great sadness. She was among the 10 per cent of MND sufferers who have the ‘familial’ gene about which little was known when her mother and her aunt died of it many years ago.

“This means Jenny’s children have a 50 per cent chance of getting it as well. The family have been staunch supporters of all Fight MND efforts over the years – no less so now.”

The team needs help, believing the world will be a better place if our “collective dollars” and scientists achieve a positive result, she said.