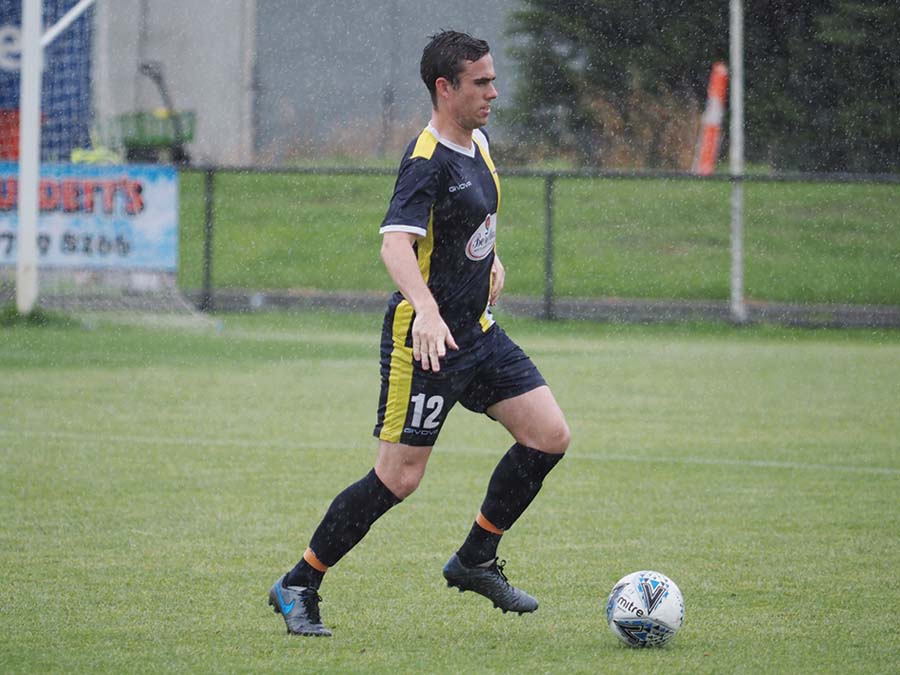 ALEX Whyte is confident that Peninsula Strikers can finish the season in style.

The 22-year-old is back at the club where his career kicked off and can’t wait for a season reboot.

“I think we’ve been unlucky in the majority of our games this year,” Whyte said.

“We’re just missing that one element that could turn our losses and draws into wins but I’m confident it’ll be coming soon.

“We’ve got a lot of quality players and if we ever get back out there we can really finish the season strongly.”

The fuse that could ignite the side and trigger a surge up the ladder may be star striker Ben Doree who is tipped to return after a brief spell with State 1 side Richmond.

“Ben’s trained with us and he’d be a great acquisition for the second half of the season,” Whyte added.

“But we need to give a 90-minute performance week-in week-out and where we end up on the ladder is entirely in our own hands.”

Whyte started playing in Strikers’ under-7s before his link with coach Jean Dimanche took him to Richmond, South Melbourne and eventually Bentleigh Greens.

“He took a group of us to all three clubs and also arranged an overseas tour to Italy when I was 15 where we played against a number of different teams.

“When he took us to Bentleigh it was in the under-16s and I also played under Artour Kirichian, now at Springvale White Eagles, and Patrick Thompson in the under-20s who’s now with Kingston City.”

Frankston Pines coach Kevin “Squizzy” Taylor was at Greens enjoying a successful stint as the club’s under-20s coach during Whyte’s progression to that level.

Taylor then joined Langwarrin for the 2018 season and that impacted on the youngster’s next move.

“I’d hoped to get into Langwarrin’s senior squad but went with ‘Squizzy’ in the 20s to start out with.

“I was seen as one of the older boys in the team which helped with my leadership and it definitely developed my game.

“In 2019 I signed with the seniors under Scott (Miller) and Jamie (Skelly) and played half a season before joining Strikers.

“Both Scott and Jamie thought that Strikers was a good option for me to test myself against men especially on the physical side of my game.”

Danny Verdun was in charge at Centenary Park when Whyte made the switch.

“I really enjoyed my time under Danny and I’ll always be grateful to him for giving me my senior debut.

“I went there to play week-in week-out and I was happy to do that in whatever role he gave me.

“I started in midfield because there had been an injury to Jonny Guthrie and when he came back I switched to right back and finished the season at left back.”

Verdun resigned and Paul Williams was appointed but COVID-19 shut down the 2020 season.

When teams were allowed to start training again it ushered in an unusually lengthy pre-season.

“I think we started back in late September or early October,” White said.

“Paul started bringing in the players he wanted then we hit the track and were working pretty hard.

“We were gathering momentum and started playing games early.

“I think our first game was on 3 January and I think we played 11 or 12 games which was good for our fitness and helped us to gel together.

“I thought we were looking really good and we were confident within ourselves of doing things then we’ve had this stop-start stuff which is unfortunate.”

Despite the delays Whyte’s aims haven’t changed – aside from playing as long as he can he wants to continue to test himself.

“One of my ambitions is to play at as high a level as possible and I’m going to continue to work hard and see what opportunities arise.

“I need to improve my strength and my capability to win that second ball.

“I still have to get used to playing against men but I’m getting there.

“It’s not just about playing pretty football which is what most of my career has involved.

“It’s also about hard work and putting your body on the line for the team.”

In State 3 news Frankston Pines has been told by council that a return to Monterey Reserve has been targeted for April next year.

Council also told Pines that its current joint tenancy of Carrum Downs Recreation Reserve may be extended to 2022 as Pines looks to expand its All Abilities program as well as developing junior programs involving two or three junior teams and MiniRoos.

The state body emailed clubs on Friday explaining its intention to use every opportunity to return to competition as soon as possible and was hoping that it would get the green light from state government for a season reboot.

FV’s competitions team is working on the fixtures with a view to completing a full season but stressed the ever-changing circumstances the sport faces and the need to be agile and flexible when reacting to them.